Hard not to conclude something weird up with this guy.

Interested by this essay I saw on AL Daily in Hyperallergic by Forrest Muelrath about ergotism, St. Anthony, apothecaries, and paintings of the Bosch era.  Learned a lot I didn’t know:

The illness is contracted by ingesting ergot fungus, which appears on cereal grains when the growing conditions are right — most commonly on rye. The last known severe outbreak occurred in the French village of Pont-Saint-Espirit in 1951. The outbreak was documented in the British Medical Journal, which describes symptoms such as nausea, depression, agitation, insomnia, a delirium that includes feelings of self-accusation or mysticism, and hallucinations that commonly include animals and fire. A non-fiction book about the 1951 outbreak, written by American author John G. Fuller, titled, The Day of Saint Anthony’s Fire, describes specific ergot-related psychotic episodes. For example, there is the afflicted man who thought he was an airplane and jumped out the asylum’s second floor window with outstretched arms expecting to fly, telescoped both his legs upon landing, and then ran 50 meters at full speed on shattered bones before being wrestled to the ground by eight other men.

First read about erogotism when trying to work out what the hell was going on with the Salem Witch Trials.  Erogitsm is a suggested cause there too.  Maybe it did have something to do with it, as did living in a nightmare war zone where Indians you imagined were demonic could kill you at any second plus an extreme religious ideology plus sexual tension plus whatever pharmacology Tituba was cooking up.

To me, semi-medical explanations of historical art or historical behavior can be very stimulating, but also tend to look for an easy out.  There’s all kinds of reasons and ways why people go insane or make wildly inventive works.  We can’t even sort these questions about people who are alive now.  Imagine declaring an answer to what combo of fame, genius, drugs, talent, mental illness, etc make Kanye West.  Who can say?  How could we hope for answers like that for a 15th-16th century Dutch (?) painter?

Reminded me of a bit from this recent John Cleese interview in Vulture about the influence of drugs on Monty Python:

Not the world’s premiere Bosch expert, but I did read this book about him: There’s a lot that can never be known about a guy who was dead by 1516.  But what struck me in Bosch reading is that he was in something called the Brotherhood Of Our Lady.  The “austerely devout lay brotherhood,” said Time magazine in 1947.  The other members were like magistrates and stuff.

From the scraps of evidence you could surmise this was a respected citizen who lived a long and productive life and appears to have never bothered anybody. 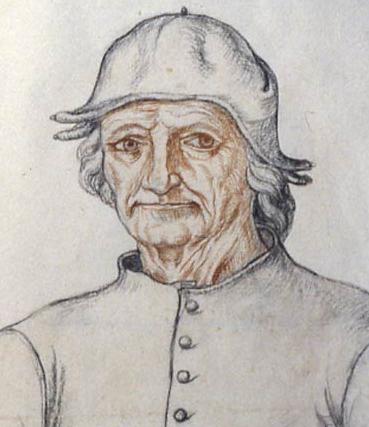 is this even him?

Is Bosch more interesting if he was essentially freaking out on mushrooms, or if he was a diligent, level-headed craftsman?

Can he be both?