This book was great.  A kind of roaming meditation on the special poignancy of urban loneliness, which is so strange and powerful because, of course, you’re around other people, even in your solitude.  Also a kind of biography of Edward Hopper, Andy Warhol, Henry Darger, and David Wojnarowicz.  (The last one I was least familiar with.)

After his mother died, Andy Warhol told people she was shopping at Bloomingdales.

Even the typeface and layout of this book is pleasing.  Henry Darger’s frustrations:

A conversation with Warhol’s nephew: 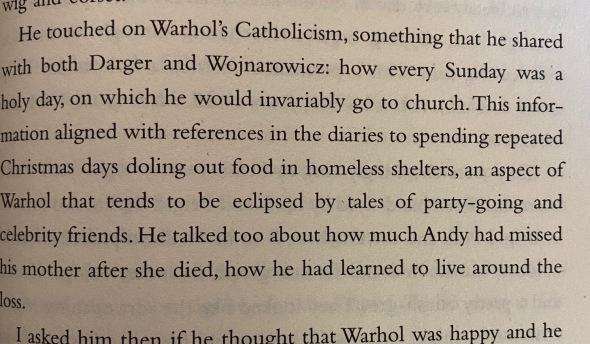 As a young person I lived in New York City, and can remember from time to time feeling loneliness there.  A loneliness that was almost pleasurable.  Of course this comes nowhere close to the form of loneliness you might feel if you were gay and alone and dying of plague.  But I felt I could connect to the feeling explored here.  Laing blends her own sensations through in a way that creates something special.

When I think about loneliness in New York, the work of art that comes quickest to mind might be Nico’s These Days.  I listen and I’m like yes, that’s the feeling.

This one didn’t quite come off as much for me, maybe because I read it second, or maybe just because drinking is sort of just a sorry, depressive subject.  A drunk when he’s drunk just isn’t that interesting.  Laing herself (if I read the book right) isn’t an alcoholic, or even a beyond-standard English level drinker, although she discusses a history in an alcoholic household.  But I didn’t feel the personal connection in quite the way I did with loneliness. 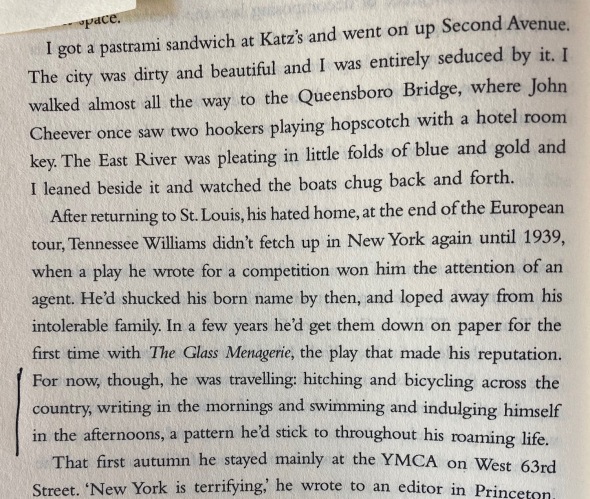 Writing in the mornings and swimming and indulging yourself in the afternoons – ideal lifestyle?

Hemingway is put on a “low alcohol diet (five ounces of whiskey and one glass of wine a day, a letter reports.”

in 1957 Tennessee went into psychoanalysis, and also spent a spell in what he described as a “plush-lined loony-bin” – drying out, or trying to.  The seriousness with which he approached this endeavour can be gauged from his notebooks, in which he confesses day after day to “drinking a bit more than my quota.”  One laconic itemisation includes: “Two Scotches at bar.  3 drinks in morning.  A daiquiri at Dirty Dick’s, 3 glasses of red wine at lunch at 3 of wine at dinner – Also two Seconals so far, and a green tranquilizer whose name I do not know and a yellow one I think is called reseperine or something like that.”

The therapist was also trying to cure him of homosexuality.

I liked the parts were Laing describes the wonderful Amtrak tradition of shared tables in the dining car.

The drinker/writer Laing profiles who I knew least about was John Berryman:

Might have to move on to To The River, about Virginia Woolf and the river Ouse.

Some iconic haircuts on Olivia Laing.