← Which one of you jokesters
Weird mood in Hollywood →

Hayes D. is back with a look at some legendary ballot cranks of California history: 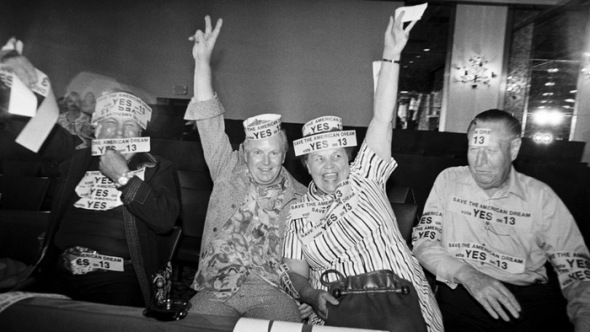 I took a sick pleasure in writing about Measure S and Michael Weinstein the other day. Thanks to Steve for asking me to do that.

While I was at it, I dug into some of the other rich, angry men who took advantage of the California ballot system: guys like Weinstein who spent a ton of money and made pretty extreme changes to the law without ever actually being elected to office. 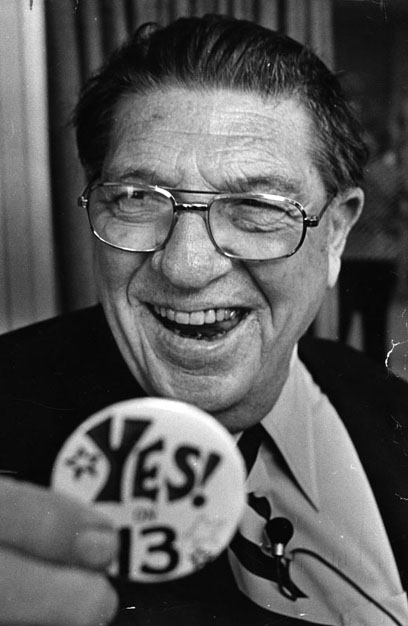 Howard Jarvis was the guy behind Proposition 13, a 1978 state ballot initiative that slashed the property tax for everybody in California by about 60 percent.
That tax cut now costs California somewhere between $20 billion and $150 billion a year.
“Is that a lot?” Well, the entire state budget for 2017-2018 is $179.5 billion. So if you take the middle of the Prop 13 cost estimate, that means one slightly overweight businessman from West Hollywood basically cut California’s budget by a third.

Jarvis was a millionaire from LA who got rich making airplane parts and garbage disposals and other stuff. Your classic 1950’s generic “businessman.” What separated him from his peers was how much he hated taxes.

So after he retired in 1962, he ran for office a few times on an anti-tax platform. Lost every time. Then he discovered the ballot initiative route, and in 1979 he wrote up Proposition 13: a rule that the property tax could only be about 1% of the appraised value of the property, and it couldn’t go up unless the property was sold.

With the help of the base he built from his other campaigns, he and his wife gathered 1.5 million signatures to get it on the ballot. Then Jarvis went on a barnstorming tour of California and riled everybody up so good that the measure passed with 65 percent of the vote. 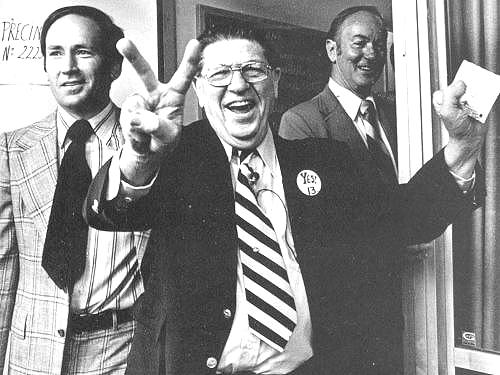 How did he get this thing passed when basically every elected official in California was against it? This section of his LAT obituary about his rallies might sound familiar to those of us who were alive in 2016:

“When I have three, four, five thousand people, I really pour it on,” he said in his gravelly voice. “Like a goddamn Baptist preacher. I tell ’em how government is clobbering them. I rev ’em up. I talk about basic human rights.”Jarvis was quick to admit that playing on the public’s fears was one of the trump cards that made Proposition 13 a big winner.

Fun word choice in that last sentence! Like being mocked from the past.
Also familiar in modern times: Jarvis was rich but managed to come off as an everyman because he was a loud, fat, funny slob. Here’s one of several observations about his pipe habits from this article by a guy who worked for him:

When he got excited, Jarvis would puff harder on his pipe, and this created a lot of excess “tobacco juice.” During one unfriendly interview with a reporter, Jarvis got agitated and started puffing hard. At one point, sitting behind his big, false desk with no drawers, Jarvis leaned forward and spit some of the excess tobacco juice into a waste can. Jerry Carroll, on the other side of the desk without benefit of a full view, wrote in a 1994 San Francisco Chronicle story that at one point in an interview Jarvis, “jerked opened a drawer in his desk, spit into it and slammed it shut.”

Buried in that passage is the revelation that there is such a thing as a “false desk.”
Jarvis made a bunch of commercials for Prop 13 starring himself and was constantly on TV talking about it. Somehow he got nationally famous doing this. He made the cover of Time! 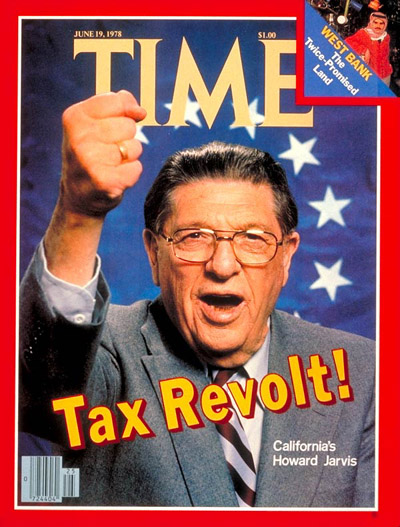 A 75-year-old California anti-tax activist! On the cover of Time Magazine! The past: it was different.
Here’s maybe the most insane thing. Remember the guy in Airplane! who waits in the cab for the entire movie? That’s Howard Jarvis.
Some people seem to think that his cameo was some kind of inside joke referencing Prop 13. I’m not persuaded by that.
Prop 13 is still California law today, and the legacy of it is… just incredibly depressing. It’s so bad.
Here’s a KPBS reporter talking about it in 2010:

FARYON: Well let’s go back to prior 1978, back in the day when schools needed money. More money to hire students, to pay for classrooms, supplies, and so on. They basically looked to the local taxpayer for money in the form of property taxes. And in fact, they set their budgets, went to the county assessor, the property tax rate was set, and then they collected enough money. As much money as they needed. After 1978, what happened was we couldn’t do that anymore. It was a statewide cap. One percent – that’s all the money that you got. So as a result, before 1978, before Prop 13, statewide the schools had a $9 billion budget. After Prop 13 they lost $3 billion – a third of that – overnight.
***
Here’s a look at California’s per-pupil spending for the past four decades in comparison to other states. The last time California was at the top of the heap was 1965, when it ranked 5th. In 1978 – the year Prop 13 passed –California was 14th out of 50. The next year, the state fell to 22nd place. In 1988, California fell below the national average for the first time and never recovered. The state now ranks 43rd.

Somewhat relatedly, LAUSD is currently running a deficit of 1.46 billion.
Lots of clips of Jarvis and stuff about the present-day effects of Prop 13 in this fun NYT docushort. 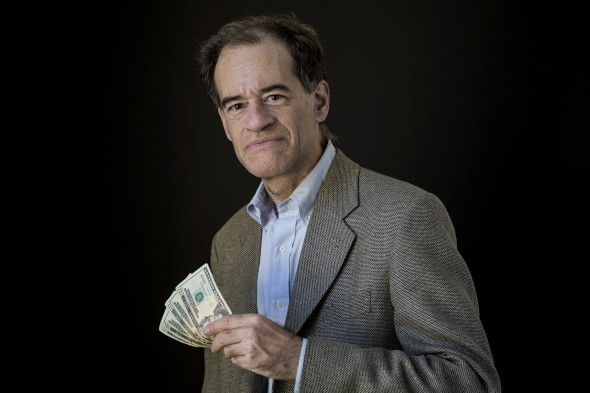 Ron “Make ‘Em Say” Unz wrote and spent $750,000 of his own money on Proposition 227, a ballot initiative that made it against the law for California schools to teach in any language other than English.
He was born in North Hollywood under cool, 60s-style circumstances. From an LA Weekly profile:

When Ron Unz’s mother, a politically active left-wing schoolteacher from Los Angeles, was in her mid-20s, she met an older professor from the Midwest on a flight to Israel. He seemed odd, eccentric even, but clearly brilliant, too, and Esther-Laio Avrutin decided, after he‘d visited her several times when she’d returned to L.A., that she would a have a child with him. When Esther-Laio wrote to her lover to let him know about her pregnancy, the letter was opened by the professor‘s wife — the existence of this wife came as startling news to Esther-Laio — and that ended any possibility that, her sister says, they would be married.

Unz only met his dad a couple of times in his life. A sad thing I discovered: the dad’s obituary does not mention Ron among his children. Oof.
A few details from this somewhat excessively flattering New Republic cover story: 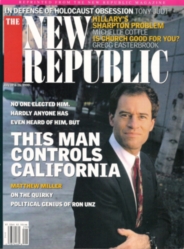 After college, Unz became sort of a nineties proto-Peter Thiel: he got rich writing software for the financial industry, then got involved in libertarian policy and spent $2 million to run in the Republican primary against the incumbent governor of California, Pete Wilson.
He got 34 percent of the vote, which seems like a lot? Against a sitting Governor, as a non-famous person? Would real Peter Thiel even get that much today?
In 1998, Unz simultaneously ran for Senate and launched Prop 227, because he thought teaching immigrant children in their native language wasn’t preparing them to get good jobs. His staff for both campaigns was only two people.
Here’s an ad for 227, seemingly targeted at Latino families:
Unz whiffed on the Senate run, but 227 passed with 61% of the vote. Did it help kids? A 2014 Stanford study conducted with 18,000 students over ten years looked into that:

The results show that while students in English immersion programs perform better in the short term, over the long term students in classrooms taught in two languages not only catch up to their English immersion counterparts, but they eventually surpass them, both academically and linguistically.

So: no, not really. Forcing kids who didn’t speak English to be taught exclusively in English was, it turned out, not a great idea.

Unz put a lot more measures on the ballot, none as successful as Prop 227. But the fact that he was able to rally millions of people to do anything at all is still impressive, because Ron Unz is not, uh, traditionally charismatic. Listen to this voice:
That’s from his 2016 Senate bid. Not successful. Prop 227 also got overturned by a huge margin in that same state election. Also in 2016, Unz staged a failed coup against the Harvard Board of Overseers as part of a very strange, backhanded campaign against affirmative action. Tough year for Ron Unz!