Then I came across his blog and I can’t put the content into my brain fast enough.  They seem to be mini blogposts / documentaries.  Here is one about the Congo, gorillas, Che Guevara, Diane Fossey… the interview with Colonel “Mad” Mike Hoare (2:00) is astounding.  What kind of character is this!

I would like to play a villain in a Nigerian film.

According to legend, the first Nollywood movie was made by a small-time electronics trader named Kenneth Nnebue, who, stuck with a large shipment of blank videotapes, decided to unload them by making a movie about a man who sells his soul for wealth. That movie, “Living in Bondage” sold hundreds of thousands of copies and established Nollywood’s archetypal plot elements: martial discord, greed, a conflict between Christianity and juju, as the occult is called in West Africa. From these accidental origins, a cultural phenomenon emerged.

– from this great NY Times article about Nigerian cinema.

“a tempting sample of sexual ripeness”

Found a copy of a screener of “Anton Chekhov’s The Duel” at work. Duels are exciting and dramatic, and a good subject for a movie, I thought. So I watched the trailer.

I looked the movie up online and learned that The New Yorker called the film “a tempting sample of sexual ripeness.”

Based on the first eleven minutes, I can’t say I agree.  There were some boobs, maybe that’s what The New Yorker was talking about?  but they were presented rather coldly, not as a source of fun or joy.

I’ll report back if I watch the rest.

DFW thought to the [unhealthy?] limit

The novella-length monologue at the center of Pale King thus tells a story Wallace had told a thousand times before, of an American adolescent attempting to escape his head, and grow up.  Formerly a self-anointed “wastoid,” I. R. S. auditor Chris Fogle recounts having muddled through his youth in the aptly named Libertyville, Illinois, unable to hold down a job and drifting between three different colleges and “four or five different majors.” Fogle, who describes himself as “like many of my generation,” speaks of having led a “crude approximation of a human life.”  he was, he said, “the worst kind of nihilist – the kind who isn’t even aware he’s a nihilist.”  He might have said he was leading a life of quiet desperation, or of conformity, even though it felt to him at the time like a free life of non-conformity.  Many of us are leading such lives, according to Wallace.  Our problem is not that we walk around angry and confused, as in Freedom. Our problem is that we sleepwalk, “choosing to have nothing matter.”

Fogle’s unlikely conversion – which is how he describes his transition to maturity, as if religious in nature – occurs after he stumbles into the wrong classroom at the Catholic DePaul University, where a “substitute Jesuit” holds forth in the waning moments of an advanced accounting class.  Alternately a parody and a paraphrase of Kierkegaard, the Jesuit delivers a peroration on the necessity of the “leap outward” into adulthood -a leap bound to look, from the point of view of the ego’s Eden that is childhood, like the “first of many deaths.”  The speech impresses on Fogle the negative aspect of his seemingly limitless freedom.  “If I wanted to matter – even just to myself,” he explains, “I would have to be less free, by deciding to choose in some kind of definite way.”

– from this essay by one Jon Baskin.

a) the name of this character, from the film “Haywire”

b) the author of this book:

(still from “Haywire” taken from here, “Baby Bootcamp” from here)

is it possible we’re getting so good at making fun of stuff that it’s impossible for anybody to do anything?

Got that from loverofbeauty, who always hits home runs, although lately I can’t even keep up.   A correspondent in our Pittsburgh office tipped me off to his fine work.

Met’s Artwork of The Day a couple back.  Cape Elizabeth, Maine. “pursuing instead a random method” 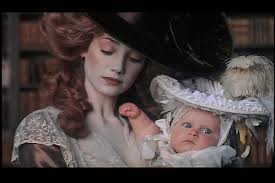 After Barry Lyndon did you begin work straight away on The Shining?

When I finished Barry Lyndon I spent most of my time reading. Months went by and I hadn’t found anything very exciting. It’s intimidating, especially at a time like this, to think of how many books you should read and never will. Because of this, I try to avoid any systematic approach to reading, pursuing instead a random method, one which depends as much on luck and accident as on design. I find this is also the only way to deal with the newspapers and magazines which proliferate in great piles around the house — some of the most interesting articles turn up on the reverse side of pages I’ve torn out for something else.

– from this interview of Stanley Kubrick by Michel Ciment.  (Picture from this blog.) ..for whom the Creator alone is responsible…

“apprehending the good, but powerless to be it, what was left for a personality like Claggert’s but, like the scorpion, for whom the Creator alone is responsible, to turn upon himself and act out the part allotted.”

– a quote from “Billy Budd” that David Milch brings up in an interview about the TV show “Luck” in “Written By” magazine.

I found the picture of the scorpion on the mysterious website www.scorpion.com A fancy cancel is a postal cancellation that includes an artistic design. Although the term may be used of modern machine cancellations that include artwork, it primarily refers to the designs carved in cork and used in 19th century post offices of the United States.

– from Wikipedia, which also informed me about the Waterbury Running Chicken (a famed fancy cancel) and that I should be vy suspicious of fancy cancels on Confederate postage stamps.

The Artist In His Museum, by Charles Wilson Peale, 1822

“To Peale, the behavior of animals served as a model for a moral, productive, and socially harmonious society,” says Wikipedia, citing David R. Bingham in the Huntington Library Quarterly.

“When you meet the hero, you sure know it”

From a New Yorker profile of Harold Ramis:

One afternoon, Ramis and I had lunch at a tavern near his office. He began talking about another star of his early films, Chevy Chase. “Do you know the concept of proprioception, of how you know where you are and where you’re oriented?” he asked. “Chevy lost his sense of proprioception, lost touch with what he was projecting to people. It’s strange, but you couldn’t write Chevy as a character in a novel, because his whole attitude is just superiority: ‘I’m Chevy Chase, and you’re not.’ ”

Ramis said that he identified with Nathan Zuckerman, the alter ego in many of Philip Roth’s novels: “Watching other people having experiences I’m not going to have. But understanding, empathizing. Much as I want to be a protagonist, it doesn’t happen, somehow. I’m missing some tragic element or some charisma, or something. Weight. Investment.”

After a moment, he continued, “One of my favorite Bill Murray stories is one about when he went to Bali. I’d spent three weeks there, mostly in the south, where the tourists are. But Bill rode a motorcycle into the interior until the sun went down and got totally lost. He goes into a village store, where they are very surprised to see an American tourist, and starts talking to them in English, going ‘Wow! Nice hat! Hey, gimme that hat!’ ” Ramis’s eyes were lighting up. “And he took the guy’s hat and started imitating people, entertaining. Word gets around this hamlet that there’s some crazy guy at the grocery, and he ended up doing a dumb show with the whole village sitting around laughing as he grabbed the women and tickled the kids. No worry about getting back to a hotel, no need for language, just his presence, and his charisma, and his courage. When you meet the hero, you sure know it.”

He smiled. “Bill loves to get lost, to throw the map out the window and drive till you have no idea where you are, just to experience something new.” And you? “Oh, I’d be the one with the map. I’m the map guy. I’m the one saying to Bill, ‘You know, we should get back now. They’re going to be looking for us.’ ”

– from “Comedy First: How Harold Ramis’ Movies Have Stayed Funny For Twenty-Five Years” by Tad Friend, The New Yorker, April 19, 2004.