Morrow quotes McCarthy as saying that “even people who write well can’t write novels… They assume another sort of voice and a weird, affected kind of style.  They think, ‘O now I’m writing a novel,’ and something happens.  They write really good essays… but goddamn, the minute they start writing a novel they go crazy“

In early 2008 Texas State University announced they’d acquired Cormac McCarthy’s papers.  The next year they made them available to scholars.  Now two books based on rummaging around in these notes have appeared.

This one, by Michael Lynn Crews, explores the literary influences McCarthy drew on, which authors and books he had quotes from buried in his papers.

The quote about novelists going crazy is from a letter exchange McCarthy was having re: Ron Hanson’s novel Desperadoes, which McCarthy admired.

This one, by Daniel Robert King, takes more of a semi-biographical approach, tracing out what we can learn about McCarthy from his correspondence with agents and editors.  A sample:

Bought these books because it gives confidence to observe that somebody whose writing sounds like it emerged pronounced from the cliffs like some kind of Texas Quran had to work and revise and toss stuff and chisel to get there.

From these books it is clear:

These books are not necessary for the casual personal library, but if you enjoy gnawing on literary scraps, recommend them both.  From King:

However, in this same letter, he acknowledges that “the truth is that the historical material is really – to me – little more than a framework upon which to hang a dramatic inquiry into the nature of destiny and history and the uses of reason and knowledge and the nature of evil and all these sorts of things which have plagued folks since there were folks.”

Wars Of The Irish Kings

In fact, land in pre-twelfth century Ireland had little political value.  Although there were rich plains, it was not a farming culture but a decentralized grazing one in which wealth was measured in cattle.  There were no cities, and the kingdoms, which rarely had roads or clearly defined boundaries, were separated by a dense forests and bogs, which were more of a deterrent to travel (or easy military movement) than the mountains.  A reading of the  sometimes-cryptic early annals suggests and endless series of battles and cattle raids.  To be glib, early medieval Ireland sounds like a somewhat crazed Wisconsin, in which every dairy farm is an armed at perpetual war with its neighbors, and every farmer claims he is a king.

Some tite illustrations in the book:

For a dip into Irish history, you can’t top:

The illustrations go a long way towards telling the story.

It’s not all bad.

On one of the episodes of Theme Time Radio Hour Bob Dylan himself says that the actual highway 61 is boring now, nothing but ads for riverboat casinos.  That may be true south of Vicksburg but north of the Biedenharn Coca-Cola Museum and the Catfish Row Art Park, I found the road compelling.

Mississippi Fred McDowell was born of course in Rossville, Tennessee.

It was Dave [David L. Cohn] in God Shakes Creation who said, “The Delta begins in the lobby of the Peabody Hotel and ends on Catfish Row in Vicksburg.” He was always welcome at the Peabody; they were glad to see him – he stayed there whenever he was in Memphis – but they never even gave him a cup of coffee, and he thought it was rather amusing that they had so little appreciation of this publicity.

So says Uncle Shelby, of Greenville and Memphis:

Since we’d been to Memphis we steered towards Oxford Miss to visit Faulkner’s house:

Mounds make a thousand or more years ago by some lost culture, perhaps connected to the people who built Cahokia: 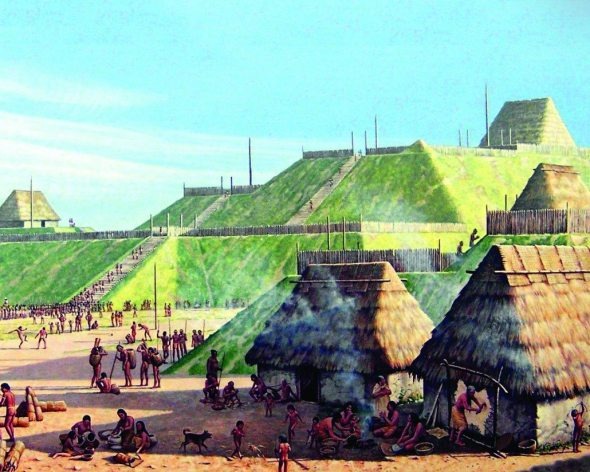 And where in the beginning the predecessors crept with their simple artifacts, and built the mounds and vanished, bequeathing only the mounds in which the succeeding recordable Muskhogean stock would leave the skulls of their warriors and chiefs and babies and slain bears, and the shards of pots, and hammer- and arrow-heads and now and then a heavy silver Spanish spur.

So says Faulkner in his essay Mississippi.  In Sanctuary he says:

The sunny air was filled with competitive radios and phonographs in the doors of drug- and music- stores.  Before these doors a throng stood all day, listening.  The pieces which moved them were ballads simple in melody and theme, of bereavement and retribution and repentance metallically sung, blurred, emphasised by static or needle – disembodied voices blaring from imitation wood cabinets or pebble-grain horn-mouths above the rapt faces, the gnarled slow hands long shaped to the imperious earth, lugubrious, harsh, and sad.

You can only listen to so much of that though; when I pulled over for Dunn Mounds I was listening to Maron interview Jennifer Lawrence.

The Raven map tells the story of the Delta.  Another flooding bottomland is the Nile delta:

where they also kept slaves, and built mounds.

great tour of the Blues Trail sites here on Wiki by Chillin662.