Conversations With series from the University Press of Mississippi 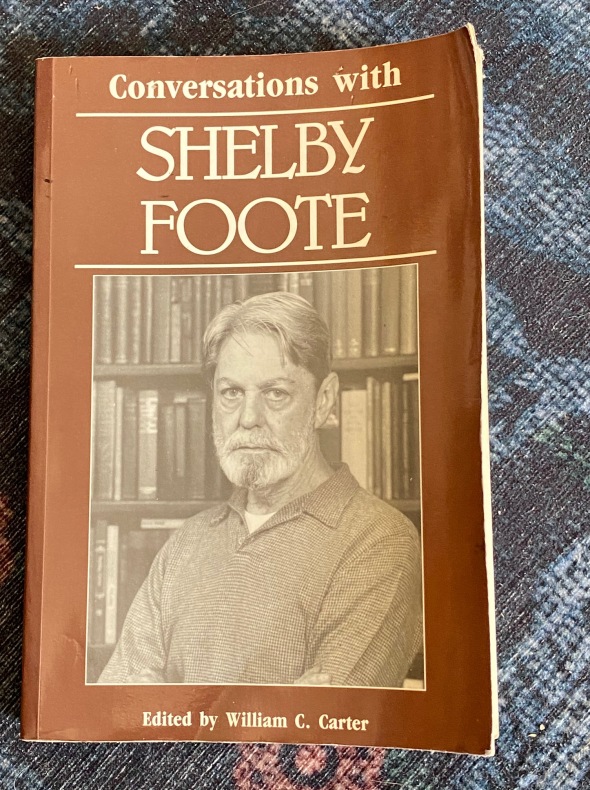 This is one my favorite books, I’m serious.  Shelby Foote is a great interview, obviously, just watch his interviews with Ken Burns.  (“Ken, you made me a millionaire,” Shelby reports telling Burns after the series aired.)  You may not want to read the whole of Shelby’s three volume Civil War, it can get carried away with the lyrical, and following the geography can be a challenge.  But the flavor of it, some of the most vivid moments, and anecdotes, come through in these collected conversations with inquirers over the years.

“You’ve got to remember that the Civil War was as big as life,” he explains.  “That’s why no historian has ever done it justice, or ever will.  But that’s the glory of it.  Take me: I was raised up believing Yankees were a bunch of thieves.  But it’s absolutely incredible that a people could fight a Civil War and have so few atrocities.

“Sherman marched with 60,000 men slap across Georgia, then straight up though the Carolinas, burning, looting, doing everything in the world – but I don’t know of a single case of rape.  That’s amazing because hatreds run high in civil wars…

There were still a lot of antique virtues around them.  Jackson once told a colonel to advance his regiment across a field being riddled by bullets.  When the officer protested that nobody could survive out there, Jackson told him he always took care of his wounded and buried his dead.  The colonel led his troops into the field.”

Finally treated myself to a few more of these editions. These books are casual and comfortable.  They’re collections of interviews from panels, newspapers, magazines, literary journals, conference discussions.  Physically they’re just the right size, the printing is quality and the typeface is appealing.

Why not start with another Mississippian, someone Foote had quite a few conversations with himself? 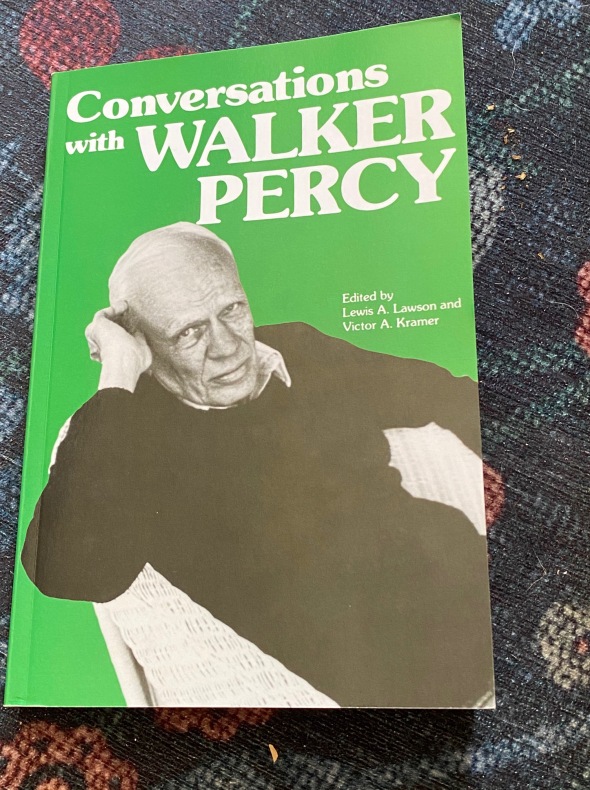 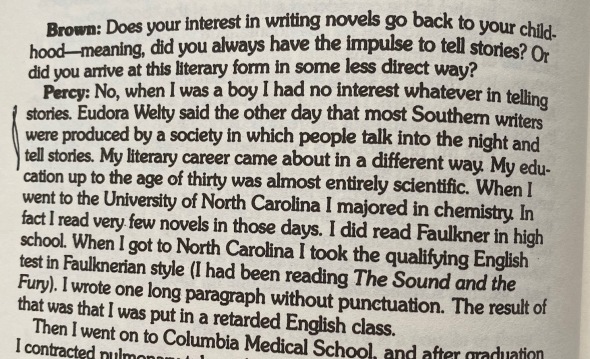 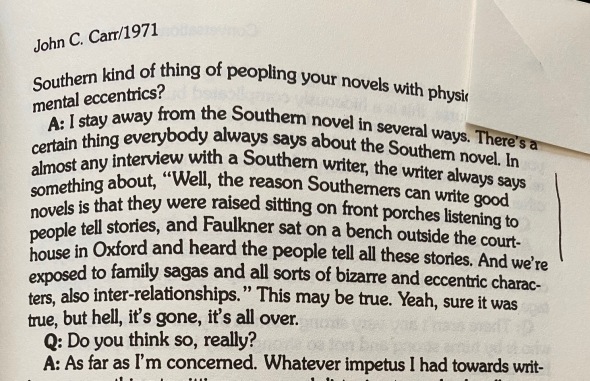 Do we dare attempt conversation with the father of them all? 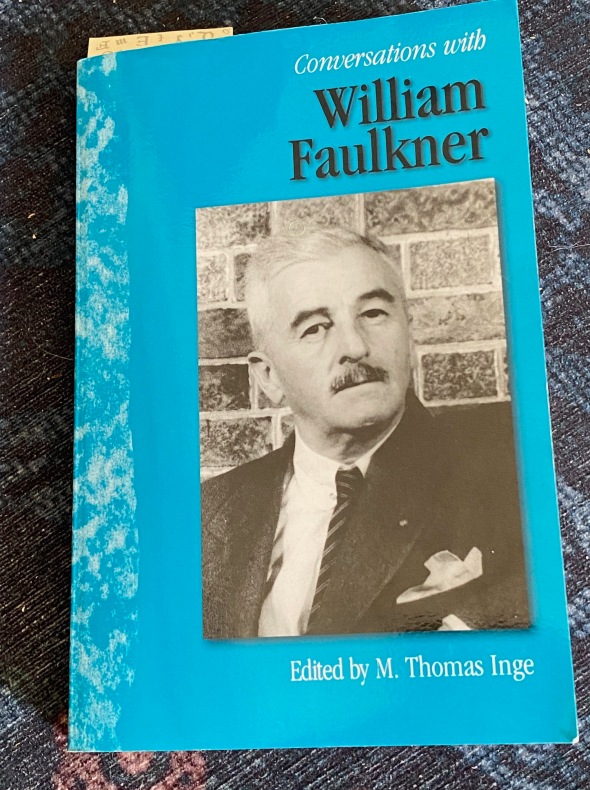 I’ve long found interviews with Faulkner, even stray details from the life of Faulkner, to be more compelling than his fiction.  Maybe it’s the appealing lifestyle: courtly freedom, hunting, fishing, and all the whiskey you can handle.  The life of an unbothered country squire, preserving a great tradition, going to Hollywood from time to time, turning the places of your boyhood into a world mythology.

We’ll have more to say about the Conversations with Faulkner, deserves its own post!  Maybe Percy gets to the heart of it in one of his interviews:

Q: Did you serve a long apprenticeship in becoming a writer?

Percy: Well, I wrote a couple of bad novels which no one wanted to buy.  And I can’t imagine anyboy doing anything else.  Yes it was a long apprenticeship with some frustration.  But I was lucky with the third one, The Moviegoer; so, it wasn’t so bad, I guess.

Q: Had you rather be a writer than a doctor?

Percy: Let’s just say I was the happiest doctor who ever got tuberculosis and was able to quit it.  It gave me an excuse to do what I wanted to do.  I guess I’m like Faulkner in that respect.  You know Faulkner lived for awhile in the French Quarter of New Orleans where he met Sherwood Anderson, and Faulkner used to say if anybody could live like that and get away with it he wanted to live the same way. 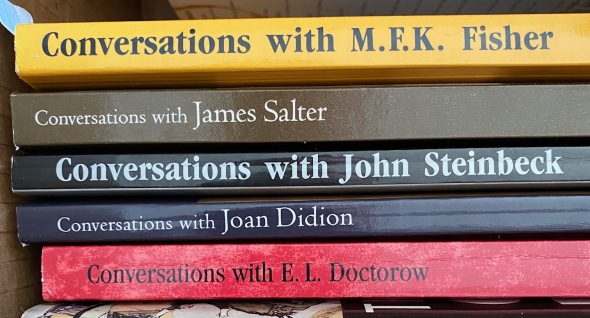 There’s one of these for you, I’m sure.  They also have Comic Artists and Filmmakers. 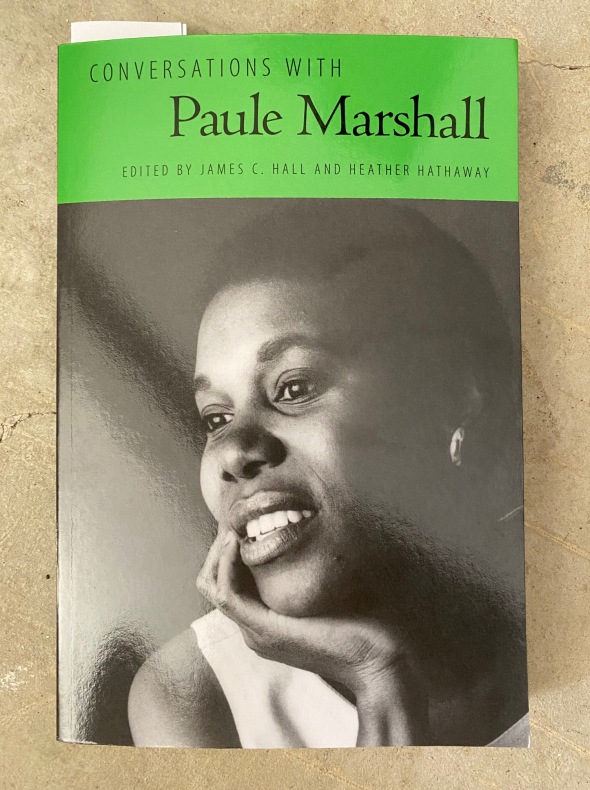 only one subject with whom I myself had a conversation

For the advanced student: 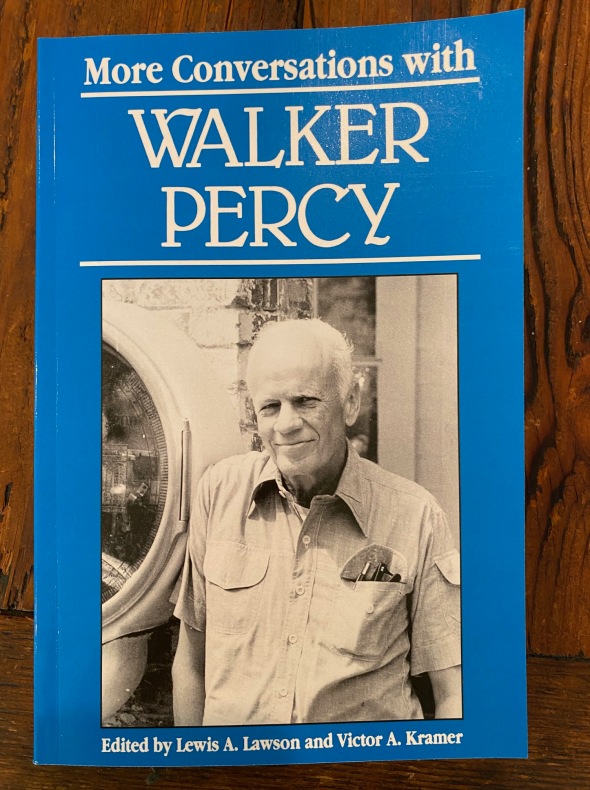 Chasing The Light by Oliver Stone 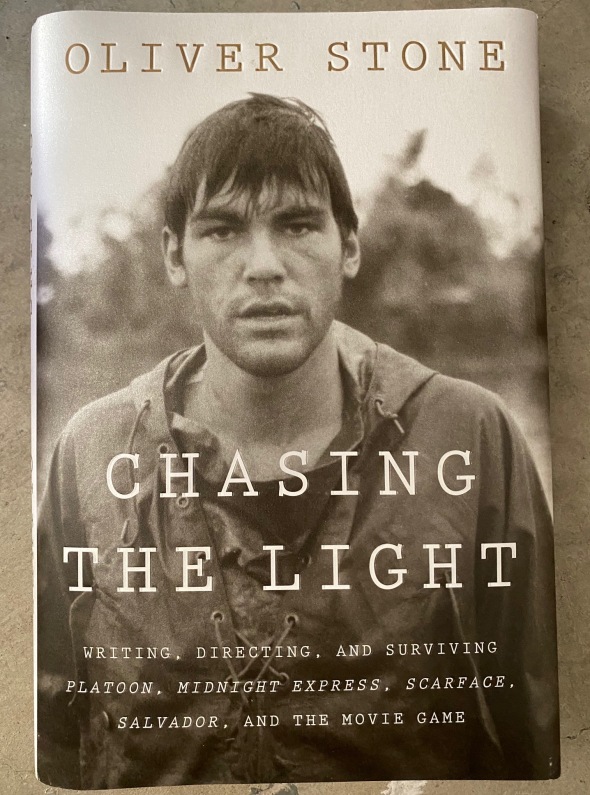 1969.  Young Oliver Stone, back from Vietnam, kind of lost in his life, having barely escaped prison time for a drug charge in San Diego, enrolls at NYU’s School of the Arts, undergrad.  He makes a short film in 16mm with some 8mm color intercuts, about a young veteran, played by himself, who wanders New York, and throws a bag full of his photographs off the Staten Island ferry, with a voiceover of some lines from Celine’s Journey to the End of Night.

He shows it to his class.  The professor is Martin Scorsese.

When the film ended after some eleven taut minutes and the projector was turned off, I steeled myself in the silence for the usual sarcasm consistent with our class’s Chinese Cultural Revolution “auto-critique,” in which no one was spared.  What would my classmates say about this?

No one had yet spoken.  Words become very important in moments like this.  And Scorsese simply jumped all the discussion when he said, “Well – this is a filmmaker.”  I’ll never forget that.  “Why?  Because it’s personal.  You feel like the person who’s making it is living it,” he explained.  “That’s why you gotta keep it close to you, make it yours.” No one bitched, not even the usual critiques of my weird mix, sound problems, nothing.  In a sense, this was my coming out.  It was the first affirmation I’d had in… years.  This would be my diploma.

This book covers the first forty years of Stone’s life, with much of it centered on the making of Salvador, Platoon, and Scarface, after experiences in Vietnam and jail.

The movies of Stone’s later career – The Doors, JFK, W, Nixon – are the ones that mean the most to me, and those aren’t covered in this book.  But I was still pretty compelled by it, surprised by the sensitive, easily wounded young man who emerges, experienced in violence but capable of great tenderness.  Struggling with his father’s expectations, his socialite mother.  His fast rise in Hollywood, frustrations and joys, and the druggy swirl that almost undoes it all, like when he gave a rambling Golden Globe acceptance speech after “a few hits of coke, a quaalude or two, several glasses of wine.”  (Video of the speech since scrubbed from YouTube, unfortch).

How about Peter Guber pitching what became Midnight Express:

Make a little money for college. Innocent kid basically, knows nothing, first trip outside the country right?  They beat the shit out of him!  Everything in the world happens to him – and then he escapes from this island prison on a rowboat…. that’s right!  A rowboat, believe it or not.  Gets back to the mainland, then runs through a minefield across the Turkish border into Greece – right?  Unbelievable!  Great story!  Tension – like you wrote Platoon.  Every single second, you want to feel that tension!

The people in the next booth

Posted: August 9, 2020 | Author: helytimes | Filed under: America Since 1945, writing advice from other people | Leave a comment

I never try to make it hard for the audience. I may not succeed, but . . . Vakhtangov, who was a disciple of Stanislavsky, was asked at one point why his films were so successful, and he said, Because I never for one moment forget about the audience. I try to adopt that as an absolute tenet. I mean, if I’m not writing for the audience, if I’m not writing to make it easier for them, then who the hell am I doing it for? And the way you make it easier is by following those tenets: cutting, building to a climax, leaving out exposition, and always progressing toward the single goal of the protagonist. They’re very stringent rules, but they are, in my estimation and experience, what makes it easier for the audience.

What else? Are there other rules?

Get into the scene late, get out of the scene early.

Why? So that something’s already happened?

Yes. That’s how Glengarry got started. I was listening to conversations in the next booth and I thought, My God, there’s nothing more fascinating than the people in the next booth. You start in the middle of the conversation and wonder, What the hell are they talking about? And you listen heavily. So I worked a bunch of these scenes with people using extremely arcane language—kind of the canting language of the real-estate crowd, which I understood, having been involved with them—and I thought, Well, if it fascinates me, it will probably fascinate them too. If not, they can put me in jail.

from The Paris Review of course.

Really missing overhearing the people in the next booth these days.  Feeling the loss of the scuttlebutt.  The collective vibecheck you get from what the people you overhear in the coffeeshop, see in the elevator at work.  The tide is out on that kind of info, the shared hum.  When it comes back in, perceptions will change.  Understandings will be recalibrated.  Was wondering how this in particular with the stock market, which moves with this mood.  We may find out soon! 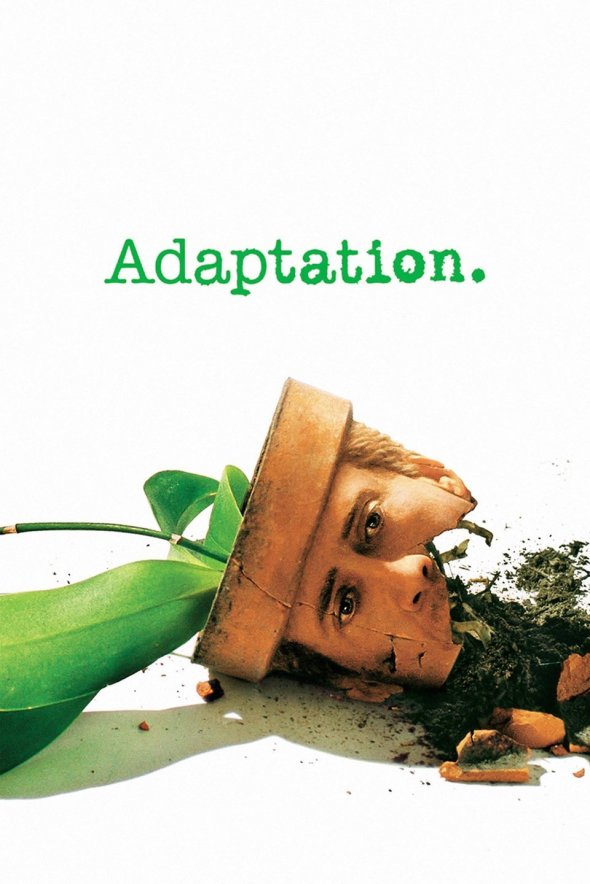 I’ve been on this planet for forty years, and I’m no closer to understanding a single thing. 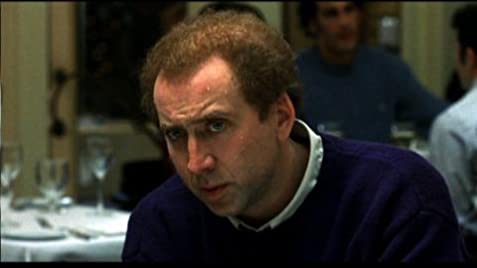 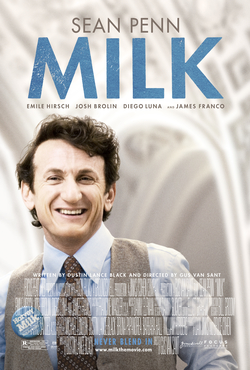 says Harvey Milk, early in Milk.  It’s his fortieth birthday when we meet him:

The film then flashes back to New York City in 1970, the eve of Milk’s 40th birthday and his first meeting with his much younger lover, Scott Smith. 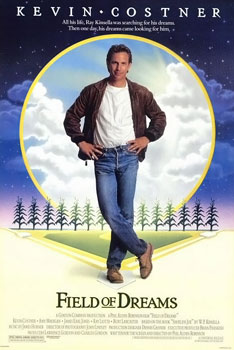 Ray Kinsella in Field of Dreams tells us he’s thirty-six:

Annie and I got married in June of ’74. Dad died that fall. A few years later, Karin was born. She smelled weird, but we loved her anyway. Then Annie got the crazy idea that she could talk me into buying a farm. I’m thirty-six years old, I love my family, I love baseball, and I’m about to become a farmer. And until I heard the Voice, I’d never done a crazy thing in my whole life.*

Then of course there’s: 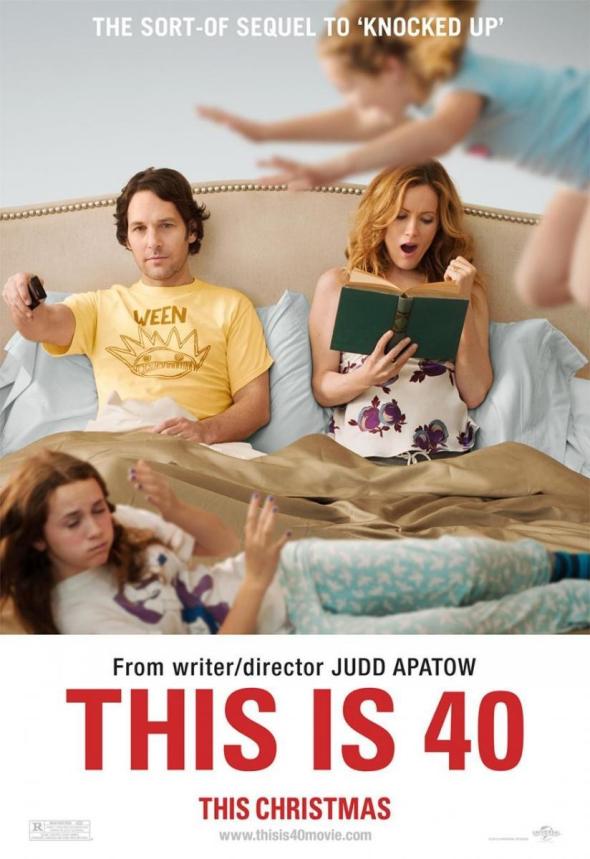 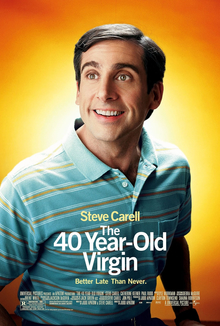 What’s going on here?  Is it because forty years old is about when (male) directors get the chance to make movies like this?

Are there movies about explicitly forty year old women? None leap to mind.

There are several movies about a ~ thirty year old woman’s crisis. Bridget Jones, My Best Friend’s Wedding – but I can’t think of forty year old women appearing with such clear declaration.

Could it be the actors? This is when make actors tend to be developed in their craft, at the peak of their power, empowered to wrestle with material they choose.

Is forty when a man straddles a divide between the freedom of youth and the responsibilities of adulthood? He MUST make some choice? Does that choice make for a movie?

Maybe it’s simpler than all that.

Let’s say you just turned 40. Obviously, 40 is just a number, but in many ways, it’s a milestone. Though people are living longer these days into the 80s and 90s, still age 40 is considered the halfway mark.

(That’s from this article on Seeking Alpha.)

Maybe it’s just the halfway mark.  When you get to halftime you ask, how am I doing?  “Make adjustments,” as the football coaches always say.

In the middle of the journey of our life

I found myself in a dark forest,

for the straight way was lost.

Not a bad way to start a story. (Dante’s Inferno, Canto I, translated by Google)

* Ray Kinsella says that before he heard the Voice, he’d “never done a crazy thing in my entire life.” But earlier in the same speech he tells us:

I marched, I smoked some grass, I tried to like sitar music,

Sounds like a guy who’s at least experimental (or is he saying he did all the cliché things of any ’60s college student?).

Ray also says that (along with Annie) he bought a farm in Iowa, the “idea” of which was, his words, “crazy.”

I think Ray protests a little too much here. I think he is the type who would at least consider a crazy thing.  Perhaps that openness is part of why the Voice chose him.