Distant view of the lost city of Qattara 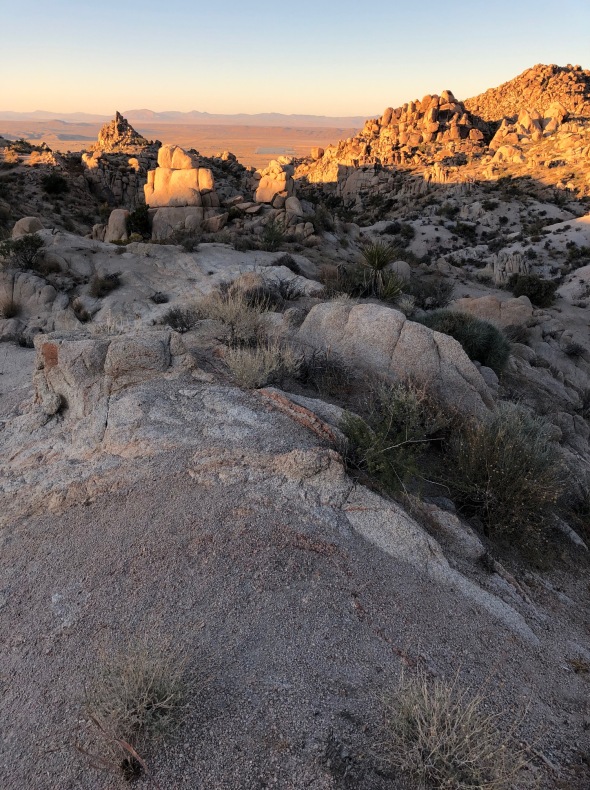 The inhabitants known for their bloodthirstiness would’ve killed me if I approached any further than the Unholy Gate.

Santa Anita, you had one job!

Santa Anita racetrack is a beautiful place.  There’s history. Seabiscuit raced there, a statue honors him.  It’s good to sit in the stands, look at the mountains, and drink a beer, watch the horses race.  Read the little horse newspaper.

Santa Anita’s been having problems though.  Horses keep dying there.

On Saturday at Santa Anita they had the Breeders’ Cup, a nationally televised race.

Santa Anita!  This is your big moment.  All eyes on you.  You’re on TV, time to shine.

They had ONE job.  And what happened?

A green screen was rushed onto the track to block Mongolian Groom from the view of 67,811 fans and a prime-time television audience. He was loaded onto an equine ambulance and taken to a hospital on the backstretch.

Cup officials said in a statement about two hours after the race that Mongolian Groom had been euthanized after suffering a serious fracture to his left hind leg.

Couldn’t we pretend we were giving him tender care? euthanize him later?!

I’ll be sad if Santa Anita closes down.  It’s like some enchanted time capsule of southern California.  But, if you’re in the horse business, you can’t get me excited about horses and then keep killing them. 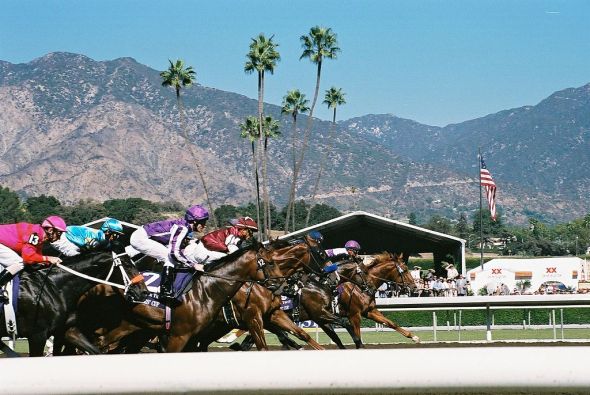 Start of the Juvenile Sprint by Jlvsclrk for Wiki 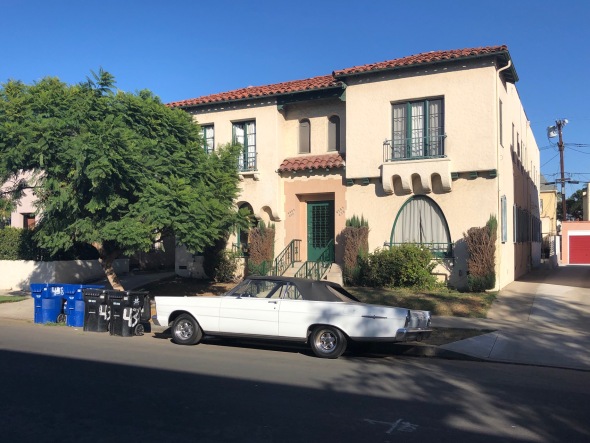 Disney + has paid (I guess) to put these signs over all the bus stations in West Hollywood.  Now it looks like shitty Disneyland.  This is a bad brand move for Disney, in my opinion.  When you see a Disney sign, that should mean you’re somewhere wonderful and fun like Disneyland, not West Hollywood.  West Hollywood and Disney aren’t a good brand fit.  Maybe Pasadena? 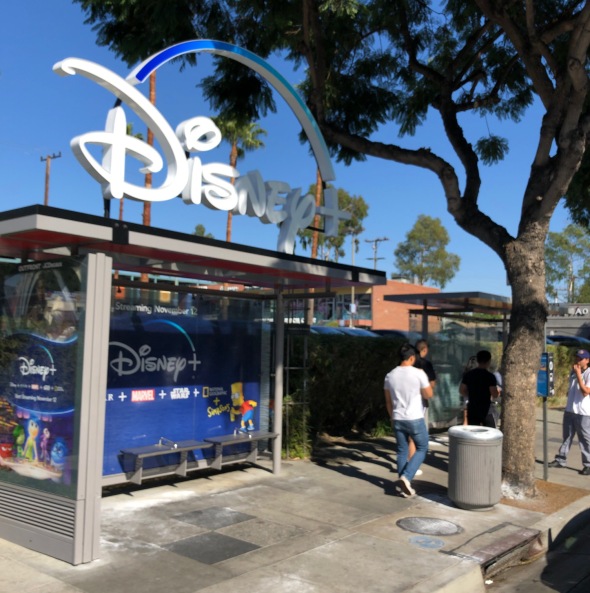 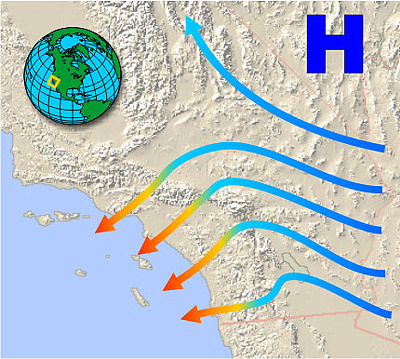 If you’re a reader of Helytimes you’ve probably come across these quotes about the dry, spooky winds that originate in the desert and blow into Los Angeles.

The definition of these winds in common use gets kind of loose.  Any wind that’s blowing not the cooling, perfume air of the Pacifc, but the dry, harsh air off the desert, can get counted as a Santa Ana wind.

One of the oldest references to the Santa Ana winds appears to be in a January, 1943 issue of California Folklore Quarterly.  Luckily we have that issue handy, and present it here for any interested California scholars. 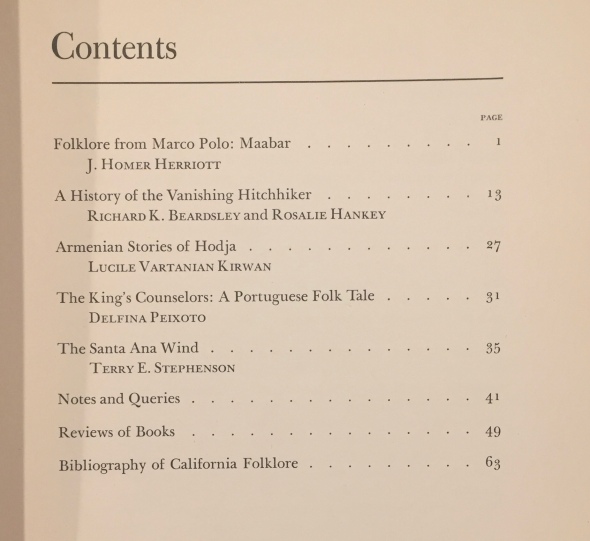 Maybe next week we’ll look into The Vanishing Hitchhiker

Will the future be primitive?

Down in Manhattan Beach on a small mission, I stopped into Brothers Burritos, recommended as a Beach Cities lunch spot by Travis of El Segundo / Hood River.  “You get two mini burritos.”  Sold.

At Brothers, the Pacific just a few streets down, they have a rack of old issues of surfing mags, including Surfer’s Journal.  This magazine has gripped me before, it’s really impressive, almost as much a journal of travel and philosophy as it is of waves.

In this issue was a piece by Jamie Brisick where he walks a stretch of Hawaii’s North Shore, “from Velzyland to Log Cabins,” a stretch he’s visited and lived in, on and off, for something like thirty-five years.  He remembers legends, has encounters, studies the changes to the beach, shares memories. 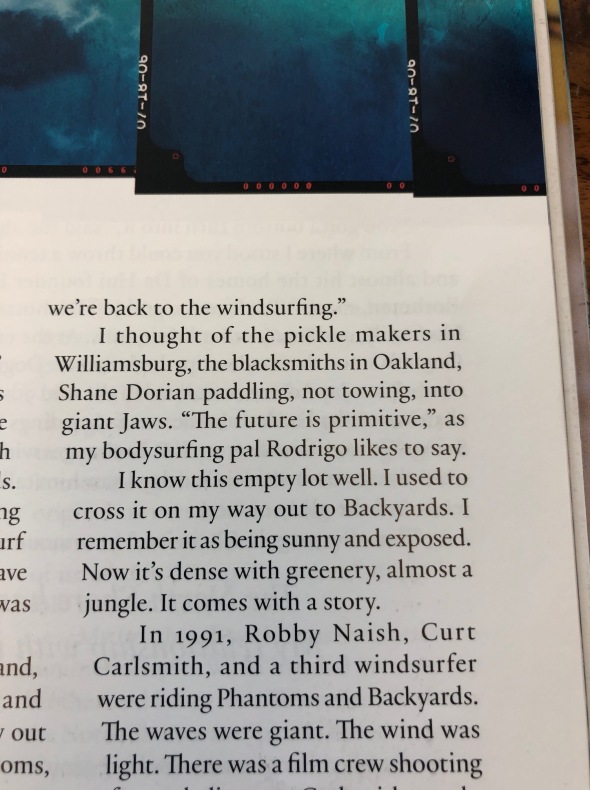 Blacksmiths.  Yvon Chouinard of Patagonia began as a blacksmith.  How about Primitive Technologies guy?

Primitive technology is a hobby where you make things in the wild completely from scratch using no modern tools or materials. This is the strict rule. If you want a fire- use fire sticks, an axe- pick up a stone and shape it, a hut- build one from trees, mud, rocks etc. The challenge is seeing how far you can go without modern technology. If this hobby interests you then this blog might be what you are looking for.

Also It should be noted that I don’t live in the wild but just practice this as a hobby. I live in a modern house and eat modern food. I just like to see how people in ancient times built and made things. It is a good hobby that keeps you fit and doesn’t cost anything apart from time and effort.

Out in the Mojave there are pockets of people into permaculture, imagining perhaps that the future may be primitive.

I’m not sure how primitive the future will be.  Some skills and trades are ancient and seem to endure.  The future may not be as futuristic as we once, collectively, seemed to dream.  Maybe the primitive sense is just an adjustment of expectation.  Does technology have to move forward all the time?  The primitive future.  Could there be a world where the past seems futuristic?  The language of backwards and forwards almost suggests a direction History moves.  But History also tells of times when life became more primitive, even for centuries.  How dark were the Dark Ages is a good debate, too big for this space.  Leave that out and there are still times where civilizations dissolve or collapse or just kinda retreat or fade out.

No matter how primitive the future gets, there’s something soothing about practicing ancient arts and crafts and trades.  Simple, without being primitive — could that be a future to hope for?

Very satisfying burritos.  I’ve since been to the Brothers in Hermosa Beach, which I also liked but just not quite as much.

The Manhattan Beach Public Library has got to be, real estate wise, one of the best public libraries in the nation.  You can sit in a nice chair and stare at the ocean. 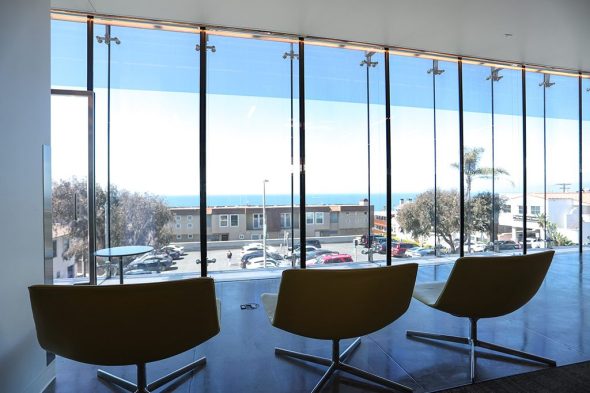 This statue is called The Hunter and Hounds, by A. Jacourmat.  The plaque tells me “This shell-torn statue stood guard above a subterranean chamber in which Signal Corps. 3rd Division American Army maintained headquarters communications during bombardment of Chateau Thierry Second Battle of the Marne.”  Wow.

a true “lucky duck.”  Here’s another look at this guy: