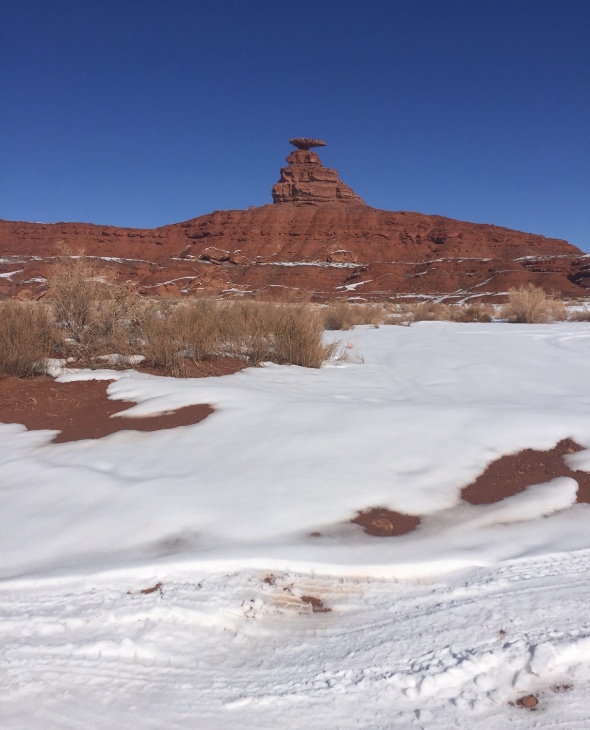 See if you can guess the name of this feature 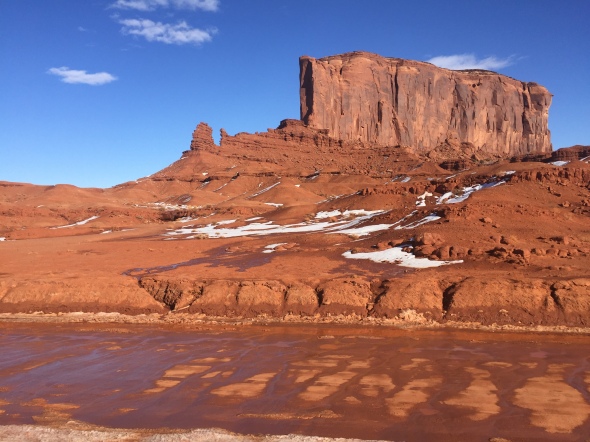 Watching this mesa melt away 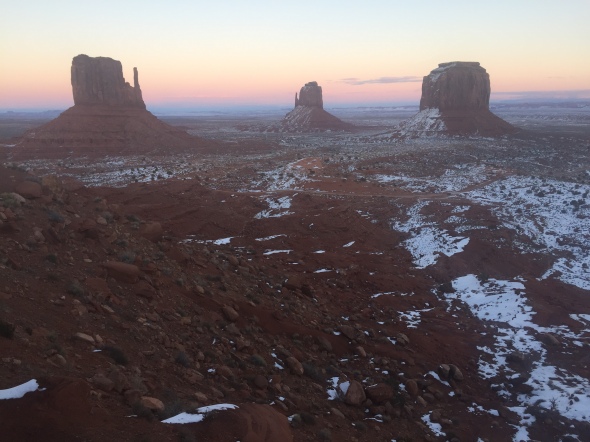 Why take pictures of Monument Valley?  Someone’s taken better pictures of it.  Why take pictures on vacation at all?  To show someone else how incredible it is?  In a way I felt dumb driving around, stopping, taking pictures.  The park is really geared towards taking pictures, even steering you to particular viewpoints (“John Ford’s Point” for example).  You become part of a parade of people taking pictures.  It gets to feel kinda silly.  Aren’t I taking myself out of the moment of experience when I snap away? Couldn’t there be some more meaningful or meditative way to experience this?

When you see something staggering, there’s a need to engage somehow, to do something to mark the occasion, and I guess taking pictures can be an act of acknowledgement.

The act of taking the pictures, too, framing them and composing them, can help you focus on what it is, exactly, that’s giving you the emotion.  Hemingway:

Watch what happens today. If we get into a fish see exact it is that everyone does. If you get a kick out of it while he is jumping remember back until you see exactly what the action was that gave you that emotion. Whether it was the rising of the line from the water and the way it tightened like a fiddle string until drops started from it, or the way he smashed and threw water when he jumped. Remember what the noises were and what was said. Find what gave you the emotion, what the action was that gave you the excitement. Then write it down making it clear so the reader will see it too and have the same feeling you had. Thatʼs a five finger exercise.

Similarly, while the landscapes that I have photographed in Yosemite are recognized by most people and, of course, the subject is an important part of the pictures, they are not “realistic.” Instead, they are an imprint of my visualization. All of my pictures are optically very accurate–I use pretty good lenses–but they are quite unrealistic in terms of values. A more realistic simple snapshot captures the image but misses everything else. I want a picture to reflect not only the forms but what I had seen and felt at the moment of exposure.

Looking at my photos later maybe what I was chasing was how the fallen snow revealed the depths of the landscape.  Where snow had fallen, where it had stayed, where it was melting.  And the way the shadows moved, making a movie out of time, light, place.

Snow, water, mud, sand, rock.  Different degrees of permanent but all of it in a process of melting away.

Monument Valley is so epic it feels “timeless” but you are watching temporary freak abnormalities wash and erode back to dust.

Spontaneous Helytimes Travel Prize to The View Hotel, a Navajo-owned property with a one of the best in all planet Earth location.  Look at how the building is set into the landscape.

(Note to readers with mild to severe alcohol dependency: there is no alcohol served at the hotel.)