What to make of Beto?

Jeff and I talked about immigration, about his travels in the U.S. and then about Isaac Asimov’s Foundation series. He had just read it again after finding it for a dollar at a used book shop. I told him I read it as a kid and really liked it, and wondered if it held up. Surprisingly well he said. He then moved down to the other side of the table, I think to make sure that the students could more freely engage in the conversation.

Reading some of the former Texas congressman’s travel dispatches.  He was just where I was, Taos pueblo:

We walked further into the village where I was struck by the magnificent beauty of the adobe homes, built next to and on top of one another. The Pueblo was established in the 15th century, had these homes been here that long? Men were shoveling snow off of the roofs against the backdrop of the breathtaking Taos mountains in the distance. As we walked, Tina shared with me history, of the Taos people and of her family. She talked about the role of the Catholic church and of the religion of the Taos pueblo. We talked about family, the village home she had just inherited from her mother, about the role of dance in her life, about her hopes for her community and her children. 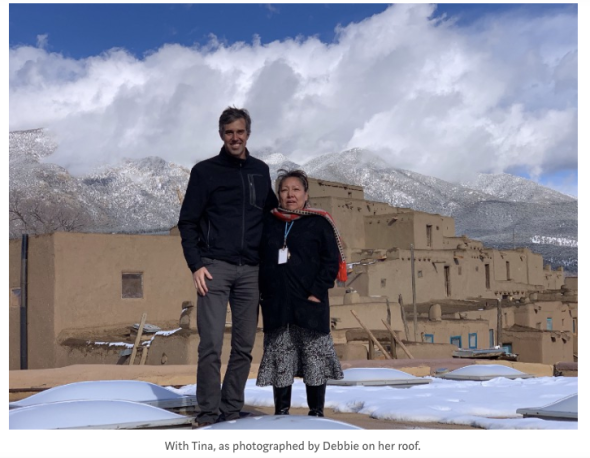 In my grandparents’ time, Debbie said after a long while, we were not allowed to go into those mountains. When Teddy Roosevelt created the national forest, he took those mountains away from us. They are sacred mountains, so you can imagine what that felt like. We had to get special permission, a pass, to go beyond the fence line into what had been our home for centuries. It was only until Richard Nixon’s administration that those lands were opened up to us again. So, she said with a laugh, while most people admire Roosevelt and detest Nixon, we feel just the opposite.

The combo of hipster travel writing and political engagement.  (Is travel writing always political?) The work to demonstrate you are listening, not proclaiming.  Obama’s rise was partly due to his skill as a writer, the acclaim for his self-revelatory memoirs, why shouldn’t Beto’s?

A hazard of this kind of writing, of writing your life in close sync with living it, is becoming a character you’re trying to create on the page, of enacting scenes that you might imagine will become good copy.  The danger then becomes manipulating what you really thought, and felt, of trying to pilot the course of your explorations a little too much.  That doesn’t work, as writing or life, it’s inauthentic, you get yourself spun around and caught in whirlpools that way.

That’s always a danger when you’re a presidential candidate.  Your soul’s at hazard.  Somehow it feels extra tough though when your way of getting yourself there is your show of authenticity.

When you claim to report your very thoughts, almost in realtime, you need either an extreme level of mental self-control, or to have your actual self and your presentational self in some very real and genuine and hard-earned harmony.  Maybe you need both.  The first is terrifying to ponder.  The second is rare, difficult both technically and at like a soul level.  And scary to practice for any long amount of time, like walking a mountain ledge.  If you fall you will suffer, somewhere from being revealed as a phony to breaking mentally and morally.

I know we can do it. I can’t prove it, but I feel it and hear it and see it in the people I meet and talk with. I saw it all over Texas these last two years, I see it every day in El Paso. It’s in Kansas and Oklahoma. Colorado and New Mexico too. It’s not going to be easy to take the decency and kindness we find in our lives and our communities and apply it to our politics, to all the very real challenges we face. And as Tina says, it’s complicated. But a big part of it has got to be just listening to one another, learning each other’s stories, thinking “whatever affects this person, affects me.”

We’re in this together, like it or not. The alternative is to be in this apart, and that would be hell.

A way to defend against inauthenticity when you’re writing/living is to make yourself the fool of your story when you really were a fool, and everyone’s a fool sometimes.  But it’s tempting to exaggerate that direction, too.  Writers can make themselves look foolish but maybe presidential candidates can’t.

I left the Pueblo heading south toward Chimayo, aiming to be back in El Paso by bedtime. Snow was starting to fall. I thought about all of the places I’d seen over the last week, all of the people I’d met. Communities within communities. Nations within nations.

Would it be terrible to hear, every once in awhile, like:

I could feel horrible diarrhea coming over me coming down the 291.  I was so relieved when I saw a Wendy’s in Espanola.  But also troubled.  I thought, ‘what if they recognize me, racing into the toilet at Wendy’s?  Do I have to stop and buy something?  What if buying something is when they recognize me?  What if they recognize me buying something at Wendy’s and that becomes a thing, like ‘Beto O’Rourke skips local New Mexico food for corporate Frostie’?  Well expedience trumped discretion in this case, I made it to the blissfully clean Wendy’s toilet a second ahead of a bottomside avalanche.  I left without buying anything.  Or apologizing.  How could I?  Should I have?  I’d wonder that, on the road back to El Paso.

I can hear the Peggy Noonans groaning, that’s just what we need, to hear about candidates’ bowel movements!  OK, sure, and Donald J. Trump is the president.  Any candidate who wants to get the votes of anyone under forty will need to project authenticity.  For anyone truly authentic, that’s not hard.  Among the schemers, where will the quest for that end?

Anyway as for Beto good luck to him.