Last month there was a weird and surprising vote in Colombia.  I’ve been learning myself about it, and let me share the story as I understand it: 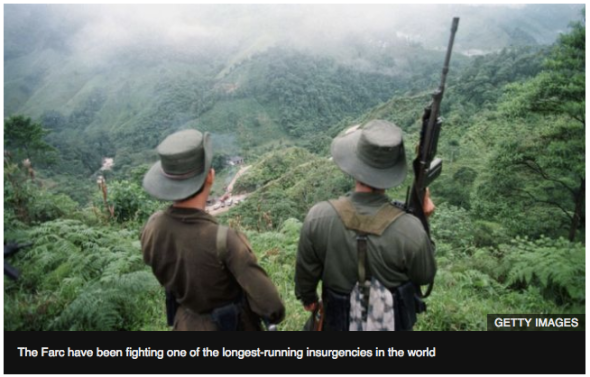 from the BBC’s helpful Q&A about Farc

For some fifty-two years, the Fuerzas Armadas Revolucionarias de Colombia, the Revolutionary Armed Forces of Colombia, fought the government.  FARC’s origins are Communisty, with their main grievance being rich people have all the best stuff in Colombia.  In their war their crimes are many and so are the government’s.

Nasty would be a mild word for this fight.

If you’re new to Colombian history it’s easy to lump this 52 year war in with the period known as La Violencia, but no, La Violencia was a whole separate ten year time, starting in 1948, in which maybe 200,000 people died.

Here’s how we got to the vote.  The last president of Colombia, Álvaro Uribe, was what you might call “aggressive” in his tactics towards FARC.

Makes sense: FARC killed his dad.  His efforts severely diminished FARC if not knocked it to the ropes.

There’s no doubt the USA has been helping the government on this, by the way.  Why shouldn’t we?  The Colombians helped us in our Korean War for some reason.

Colombia entered the Korean War when Laureano Gómez was elected as President. It was the only Latin American country to join the war in a direct military role as an ally of the United States. Particularly important was the resistance of the Colombian troops at Old Baldy.

Camera Operator: SFC. CHARLES M. ROBERTS – DOD ID: HA-SN-98-07069 (old version)
Personnel of the Korean service corps unload logs from an M-39 Armored Utility Vehicle at the RHE 2nd US Inf Div supply point on “Old Baldy” near Chorwon, Korea. Logs are for use in the construction of bunkers. A second M-39 is in the background. Korea, 1 Oct 1952.

from the BBC FAQ on FARC.

First secretly, then publicly, his guys negotiated with FARC in Havana.  The two sides reached an agreement that would end what Santos called the last armed conflict in the Western Hemisphere.

According to the United States Department of State, Timoleon Jimenez has set the FARC’s cocaine policies directing and controlling the production, manufacture, and distribution of hundreds of tons of cocaine to the United States and the world, including the “taxation” of the illegal drug trade in Colombia to raise funds for the FARC and the murder of hundreds of people who violated or interfered with the FARC’s cocaine policies

Santos and Timochenko shook hands at a meeting in Havana in June.

All that had to happen to ratify the accord was that Colombia’s people vote on it.  Guess what happened?:

Don’t know where CNN got this number, The Economist says 13m people voted.  Anyway, low turnout in a country of 47 million, partly because there was a hurricane.

Perhaps many NO voters thought it was bullshit that FARC murderers would get to be in parliament and wouldn’t be punished much for their various cruelties.  Says The Economist:

People who live in areas where the FARC has recently been active mostly backed the deal. “We are the ones who’ve had to live with bullets flying around us,” says Freddy Rendón, a cattle rancher in Uribe, a town in Meta, in central Colombia, where Yes won 93.5% of the vote. Those who live in more peaceful parts, including cities, voted No.

After the votes were counted, everybody was apparently surprised and nobody knew what would happen next.

Then, in a funny twist, Santos won the Nobel Peace Prize.

Maybe to give the whole project a peaceward shove from Norway.  Some cynics suggested Santos was a little too thirsty for the prize.   That’s a little vain perhaps but is it so wrong?  There is something funny about how much humans like prizes.

Santos with a bird from The Guardian, click for link.

What will happen now is unclear.  FARC doesn’t seem dying to go back to fighting.  Maybe they can’t, in which case Colombian’s voters are, collectively, clever if sneaky negotiators who pulled quite a trick.

Me?  I’m rooting for peace in Colombia, a country I very much enjoyed visiting.

Popayán, Colombia, in a photo taken by Helytimes.

You can read more about Colombia, what little I know of it, written at about this level, in  my book:

Only if you like tales of fun and adventure.

Amazon or your local indie bookstore.  Pick one up at South Congress Books in Austin, TX for example.

I think you’ll enjoy it.