← Nassim Nicholas Taleb
What is a story? What is narrative? →

This movie is on HBO this month.  I saw the movie in the theater and thought it was pretty good.  It really captured the batty, Lewis Carroll eccentricity element of Churchill and the British Parliament.

But one thing that I was wondering about was the title.  I remembered a story I’d heard years ago about Churchill visiting Harrow in 1941.  The schoolboys sang a new verse to an old song:

When Churchill visited Harrow on October 29 to hear the traditional songs again, he discovered that an additional verse had been added to one of them. It ran:

“Not less we praise in darker days
The leader of our nation,
And Churchill’s name shall win acclaim
From each new generation.
For you have power in danger’s hour
Our freedom to defend, Sir!
Though long the fight we know that right
Will triumph in the end, Sir!”

Churchill didn’t care for the word darker.  In his speech to the school he said:

You sang here a verse of a School Song: you sang that extra verse written in my honour, which I was very greatly complimented by and which you have repeated today. But there is one word in it I want to alter – I wanted to do so last year, but I did not venture to. It is the line: “Not less we praise in darker days.”

I have obtained the Head Master’s permission to alter darker to sterner. “Not less we praise in sterner days.”

Do not let us speak of darker days: let us speak rather of sterner days. These are not dark days; these are great days – the greatest days our country has ever lived; and we must all thank God that we have been allowed, each of us according to our stations, to play a part in making these days memorable in the history of our race.

Getting all that from the National Churchill Museum.

I believe this Wikipedia page is inaccurate:

“The Darkest Hour” is a phrase coined by British prime minister

Did he coin this phrase?

Winston Churchill to describe the period of World War II between the Fall of France in June 1940 and the Axis invasion of the Soviet Union in June 1941 (totaling 363 days, or 11 months and 28 days), when the British Empire stood alone (or almost alone after the Italian invasion of Greece) against the Axis Powers in Europe.

Perhaps he uses it in his volumes of history, which I don’t have at hand.  But that’s not the source Wiki cites.  In the cited “Finest Hour” speech, Churchill did use the phrase “darkest hour,” but to refer to what a sad period this was in French history:

The House will have read the historic declaration in which, at the desire of many Frenchmen-and of our own hearts-we have proclaimed our willingness at the darkest hour in French history to conclude a union of common citizenship in this struggle. 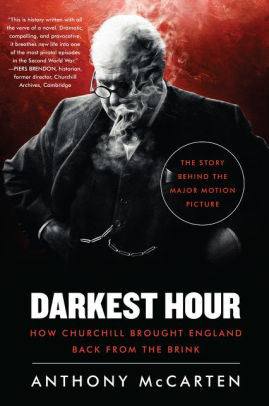 on Kindle and did a search.  Unless I’m missing something, I can find no other time in the book where Churchill himself is quoted using the phrase “darkest hour.”

So, the movie about Churchill uses for its title a term that Churchill himself specifically asked people not to use.

My question as always: is this interesting?