← Bird
Plans are worthless, but planning is everything →

Beyond Beef ($BYND) IPO’d.  Unlike Uber, it has so far been a huge success.

I will disclose bought some shares of BYND once it was launched.  (I didn’t, like, “get in” on the IPO, like early investor Bill Gates no doubt did, I bought them on day one as soon as I realized it’d happened).

This product is dynamite.  The killer element: there is no gluten, no soy, and no GMO.  Soy-based meat replacements have always seemed pretty limp to me.  Beyond Beef I believe I first tried in burger form: terrific.  The crumbles I’ve used to make very satisfying bolognese-style ragus.  Beyond Beef uses pea protein.  I love peas. Here’s Orson Welles reading an ad for peas.

“Every July, peas grow there.”  I think of that whenever I think of peas.

Tyson and some powerful competitors may get in the alt-meat game.  I’m not certain Beyond’s moat will hold, but I think it’s hard to make an acceptable beef substitute to a beef eater, and they have done so.

A perfect use for this product is in the junk beef realm, the world of frozen ground beef for fast food tacos and burgers, where the beef itself is of probably repulsive quality, raised under obscene conditions, and the taste is really coming from packets of flavor-enhancing additives.

Beyond’s ability to get in on this market impresses me.  When I saw that Del Taco was serving Beyond tacos I tried them as soon as I could.  Here was an area well within my circle of competence (fast food tacos) where I had an advantage over other investors because I live in Del Taco’s range, near their headquarters.

Del Taco originated in the Mojave Desert.  The Mojave Desert may represent a possible future for the United States, and thus be on the cutting edge of trends.  There’s something sci-fi about the landscape.   Something prophetic.  Biblical.

When pioneers reached the American desert, they remembered the desert landscapes told of in the Bible.  They marveled anew at the prophetic power of the Bible on what would be faced on the way to the Promised Land.

At the Del Taco in Ontario (CA) where we stopped to try these tacos again, I asked the kid how the Beyond tacos are selling.  He said they were selling ’em out every day.

Del Taco’s stock has the ticker symbol TACO.  Surely Matt Levine or someone has examined how gimmick tickers tend to do. 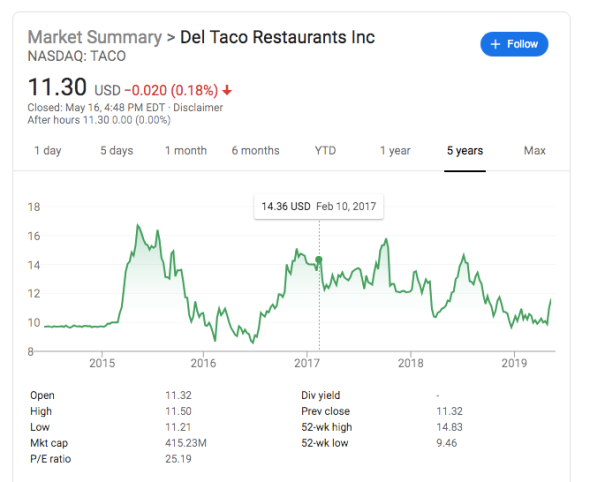 Here is the last six months:

A pretty narrow range.  The Beyond taco launched April 25.  Possible that ~$1 bump there in late April – May comes from the Beyond release.  Or just from the stock crossing and staying beyond the legendary $10 threshold.

Whether stocks under $10 really are often ignored by big institutions or not, I haven’t investigated, I’ve seen takes on both sides and can offer no informed opinion.  It does seem like, despite Malkiel, there are dumb glitches like that in markets all the time.

Is Del Taco an effective sneak way of riding the BYND wave?  I don’t know. On May 6, Del Taco posted some disappointing earnings results. 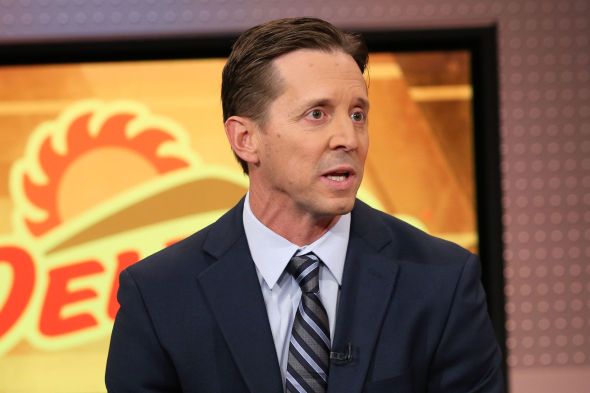 And consider his inspiring tone as he discusses the new Beyond campaign:

Last but certainly not least, we are using menu innovation to drive traffic in incremental Del Taco occasions with the exciting recent launch of the Beyond Taco and Beyond Avocado Taco, which are now available in all restaurants. As guest demand for vegan and vegetarian options continues to grow, we took the opportunity to partner with Beyond Meat, an innovative leader in plant-based proteins, to be the first Mexican QSR chain to develop a proprietary blend seasoned 100% plant-based protein.

A key objective as we developed our Beyond Taco strategy was competitive differentiation which we attack on three fronts, flavor, variety and convenient value. The team did a great job developing a proprietary and unique flavor profile that taste incredibly similar to our current ground beef, allowing us to broaden its appeal to not only attract vegans and vegetarians, but also those looking for better for you options or to reduce red meat without sacrificing flavor.

Next is variety. Our Beyond ground protein can be substituted for any other protein or added on any menu item, including burritos, nachos, bowls or salads. This provides best-in-class variety to our guests and endless future product innovation opportunities for our culinary team.

Word about the Beyond tacos is JUST getting out.  I think it’s fair to say I’m close to the front lines when it comes to fast food taco news.  Has the full impact been felt?  Will it matter?  How much of Del Taco’s consumers are recurring customers?  Will they care about this new item?  Will new customers be drawn in by Del Taco’s enticing campaign (advertised on signs outside every location I’ve seen in SoCal?  Who is eating the Beyond taco?  Cappasola:

And as expected, we are seeing some new faces as well as a lot of trial among our existing guests. So great opportunity here from a consumer standpoint. Generally, this is the type of customer that is in QSR today and QSR just is not traditionally providing them great options and we feel like we can.

It’s fun to think of the stock market as a chance to gamble on all these variables.  It will be interesting if TACO stock falls below $10 again.

One problem, I’d say, is that a Beyond taco costs fully a dollar more than a regular taco.

The pendulum seems like it’s swung in the USA national mood from feeling pretty optimistic about the future, as I think we all did in say 2009, to feeling pretty grim.  Maybe that’s just me getting older or my narrow bubble, but it feels like there’s less talk of wonderful possibilities for the near future.  Eliminating or reducing industrial meat-farming, improving our diets, making more and better food options available even in the cheap fast food space seems to me like it could be a great development of a blossoming future.

The future’s so bright I gotta wear shades, or as John Cappasola puts it:

Our operational efforts are paying off with early guest experience measurement survey results showing a high level of guest satisfaction for Beyond Tacos, even higher than the very successful Del Taco following its launch.

For me as a consumer, I will say, when I left Del Taco after trying the Beyonds for a second time, I felt, “now here’s brand that can deliver a value-oriented QSR-Plus position.”  Which, it turns out, is just what Del Taco was aiming for!

(Disclosure: I am nothing more than an enthusiastic amateur and I do not offer investment or financial advice.  I do not own shares of TACO at this time but I’m thinkin’ bout it!

Other Helytimes posts on business