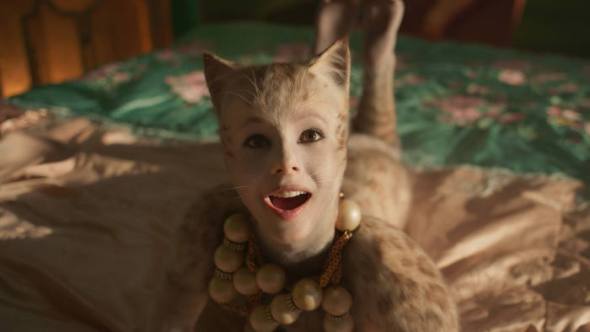 Somebody who saw the movie before me said “it helps if you know that the Cats are competing in a contest of singing about their lives to see who gets to go up in a hot air balloon and die and then get reborn with a new life.”  That does help.

A critical failure can be kind of fun, even a badge of honor, but a colossal financial failure is bad.  That makes everyone uncomfortable.

I kind of enjoyed my experience of the movie, I wasn’t bored.  Several people in my theater (at The Grove) were straight up bawling crying with real emotion, both during “Memory” and during the song Dame Judi Dench sings about growing old (“Finale: The Ad-Dressing of Cats”).  I myself was quite moved.  I’d never seen Cats the musical and didn’t know much about it.  I was struck that this was really kind of a veiled story about city lowlifes and pimps and shady customers and dramatic sad sacks, and theater kids.  It’s about finding redemption for a squandered or spent life?  The setting appeared to be something like London’s West End and Trafalgar Square.

It’s almost silly to talk about what went wrong with this movie.  When Idris Elba is dancing and his genitals are either tucked into a suit or disguised with some kind of CGI, so he doesn’t even have normal cat genitals, that’s a jarring image, certainly, and takes one out of the film.

Francesca Hayward, the Kenyan-born dancer who plays White Cat, the star or at least our guide through this thing, is an amazingly gifted dancer and performer.  Probably.  It sounds like it, I can’t really say, because this movie hits at level of fakiness where I can’t really tell what’s her, and what’s faked.  I can see how that might sound “cool” in conception but in reality it just robs me of seeing human talent.

Why didn’t they just assemble this amazing cast of talented actors for about thirty days and then have them put on a simple production of Cats in a big empty warehouse?  It would’ve been much more engaging to see what these performers can really do, to see what they might bring out in each other, to see what kind of magic they can make just with their bodies and voices.  I suspect the answer to why they didn’t do that is:

1) they didn’t trust an audience would consider that spectacular, new, unique enough for a movie

The makers of this movie didn’t trust an audience, they assumed we could be easily fooled by manipulated computer-designed imagery that’s not “cheap” in terms of money but is cheap in terms of artistry.  That, to me, explains some of the reaction this movie.  These people think we’re fools.  Whoever (and I guess we have to say “director Tom Hooper”) made this movie didn’t go forward to make something they themselves would find really cool and impressive and special, just the way they’d like to see the story told, and then struggle to achieve that vision, and then share it with us.  Instead, the makers set out to fake us out with tricks that we know are tricks, and they know are tricks.  It’s disrespectful, and that’s shameful.

How great would it have been to actually stage Cats with Taylor Swift and Jennifer Hudson and James Corden and Ian McKellan and Dame Judi Dench, stripped down if necessary, and just show us the results?  But that’s too hard, they never could’ve convinced those actors, they never could’ve gotten the scheduling right, to do that would’ve been an act of absurd daring and ambition.  So instead they just threw money at it and made something cheap and gaudy and unconvincing.  The result is kind of like being a kid and being taken to Disneyland and your divorced dad is buying everything but he’s on his phone the whole time.  You know you aren’t being given anything of real value.

Money is cheap in movies.  It’s not impressive.  Making an expensive movie is easy, Hollywood does it all the time.  Talent and vision and effort and energy and collaboration are what’s rare.  That’s what’s impressive.  Some of that actually shines through the movie of Cats, despite everything.

I thought James Corden did a heroic job, a true showman.  And Laurie Davidson as Mir. Mistoffelees was great.

I compared a few of the songs to the Broadway versions and preferred the movie versions. (Compare, for instance, Corden’s Bustopher Jones).

No, the reason why people will hunger to see ”Cats” is far more simple and primal than that: it’s a musical that transports the audience into a complete fantasy world that could only exist in the theater and yet, these days, only rarely does.

That’s what Frank Rich said back in 1982.  These days movie audiences are REGULARLY transported to complete fantasy worlds that could only exist in the movies.  Why mess around with trying to translate a magical theater experience to that?  (Deadline highlights the obvious reasons: good track record of musicals for Universal, incredible cast, huge hit IP, etc).

Maybe that was the mistake of the movie, to try and duplicate the massive transformation the show did to a theater to something a movie could do.  To do that, while also showing you the faces of these beloved actors, was maybe just a mismatch?

And also the plot is very strange.  It’s funny, almost one of the lessons of Cats the Broadway sensation is that people can go along with a pretty dense internal logic without a lot of handholding provided there’s a lot of intense longing, empathy, nostalgia, vivid expressions of where characters are coming from.  However many million people who enjoyed Cats the show just accepted the many uses of the word “jellicle” and went along.  People will do that, if the vision is coherent!  Fairy tales are full of that kind of buy-in.  Maybe the filmmaking team just lost their confidence somewhere along the way.  I’m made to understand they actually added more of a plot, for the movie.

The Financial Times liked the film!  I give it a B+.  I’m not here to poo on things, it was a fun early afternoon.

To me it seems likely “they” made the choices they made in good faith, with high hopes and something just didn’t quite work. Happens all the time.