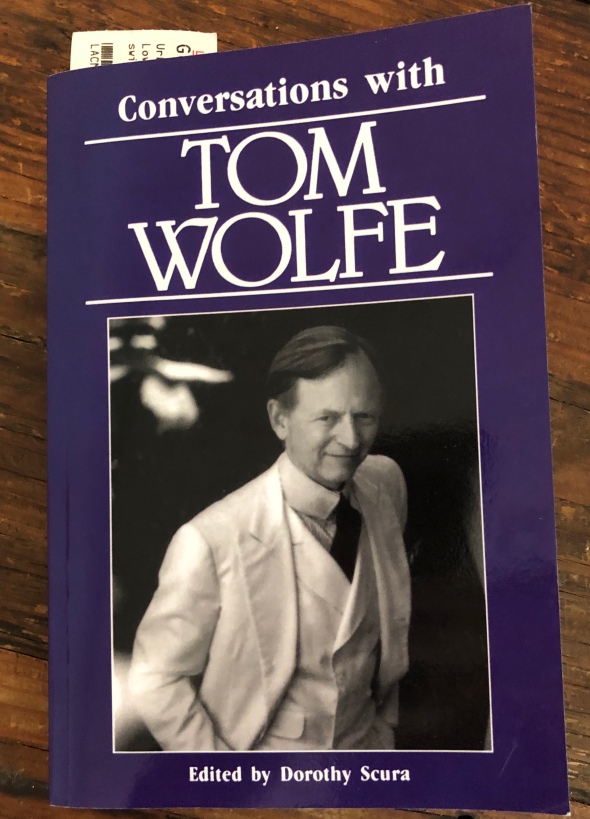 The people in the psychedelic world had been religious but had always covered it up.  There was such a bad odor about being frankly religious. I mean Kesey would refer to Cosmo, meaning God; someone in the group used the word manager.  Hugh Romney [a.k.a. Wavy Gravy] used to say, “I’m in the pudding and I’ve met the manager.”

On unusual style / carrying yourself as a reporter:

When I first started at Esquire, I made the mistake of trying to fit in.  And given the kind of things I was sent to cover – stock car racing, the Peppermint Lounge, topless restaurants in San Francisco – not only did I not fit in no matter how hard I tried, but I would deprive myself of the opportunity to ask very basic questions that the outsider can ask.  You just discover after awhile that people like to be asked questions they know the answers to.

be an odd, eccentric character… people will volunteer information to you

In France they discovered Faulkner – not as we would, as a very complex and somewhat arty writer, but as a primitive who had barely emerged from the ooze, somehow, to write.

At the same time they were admiring the energetic, classless and low-rent, rude, animal side of American art, our artists were striving like mad to shed all of that and to stop being hicks and rustics.

re: The Painted Word and From Bauhaus to Our House

I want people to pay attention to what I think is my sole contribution in these areas – showing how certain fashions, certain styles, certain trends come about.  They’re not like the weather.  Most of our critics and historians seem to think that styles are like Bermuda highs.  That it’s the spirit of the age and so cosmic in nature that you don’t have to think about how it happened.  You just note that it happened, and if the weather is serious enough, you bow down.  What I keep saying is that styles are created by people.  And the task of a historian – which is all I picture myself as in these books – is to find out who these people are and what the competitions were that brought the styles out.

On advice to young journalists:

You should get up your courage and approach the biggest magazine you can think of that might be interested in the subject.  Approach a junior editor rather than the man at the top, because the junior editors are in competition with one another to discover new writers.  Even if you’ve already written it, present the story idea to the editor, because editors like to feel that they’re part of the creative process. Wait a decent interval of about two weeks and then send them a manuscript.  Magazines will be in a receptive mood if you have approached them ahead of time.  They’ll want it to be good, they’ll want to buy it, and they’ll want it to be a success.  There’s a continual shortage of good writers and good journalists.  It’s really not an overcrowded field because there’s not that much talent to go around.  A lot of it is having the determination and perseverance to do the reporting.

There are several references to an article I’m not sure I’d read before, about carrier pilots operating off the USS Coral Sea, dodging missiles over North Vietnam, “The Truest Sport: Jousting with Sam and Charlie,” which you can read here on Esquire’s website.

I wanted the writing to appear buoyant, free and easy, spontaneous.  Creating the effect of spontaneity in writing is one of the most difficult and artificial things you can do.  I was much relieved to learn that Celine used to spend four or five years rewriting his novels in order to achieve the effect of someone just sitting down across the table from you, spouting up the story of his life.  Writing is an extremely artificial business: it’s artificial by its very nature – you’re taking sounds and converting them into symbols on a page.  To make that transference from one sense to another and reinvest the words with vigor and rhythm and spontaneity is quite a feat.

my intention, my hope, was always to get inside of these people, inside their central nervous systems, and present their experience in print from the inside.

[after he wrote an attack on The New Yorker, and everybody came after him]

I suddenly found myself denounced by the likes of Joseph Alsop, Walter Lippman (he called me an ass in print), Murray Kempton, a distinguished columnist for the New York Post.  Richard Goodwin called up from the White House to denounce me; E. B. White; even J. D. Salinger, whom the press hadn’t heard from for years, sent in a telegram denouncing me as a yellow journalist.  I really felt that perhaps the world was coming to an end. All these eminent people descended upon me, and I felt the sky was falling in.  Then a few days later I woke up, and nothing had happened.  It dawned on m that it’s very difficult to get hurt in a literary fight. In a strange way, all the shouting and shooting and the explosion were part of the literary excitement.

(funny that one of the criticisms, J.D. Salinger’s term, was that Wolfe’s attack was “gleeful.”

The next two are from an interview with Ron Reagan in “GEO, 1983.  The prompt here is about Pol Pot and the then rampant Khmer Rouge:

So much of the political thought and fashion among writers and other commentators in the United States is based on the idea that liberty has always existed in a kind of mist over the left.  In this country there have been very few ideologues, but there has often been a Marxist mist, the idea that there is something wonderful about socialism that if pursued correctly will lead to liberty, peace, harmony and the betterment of man in a way that nothing going on in modern industrial nation can.  In the past ten years it’s been discovered that socialism, when put into effect by experts, leads only to extermination camps.  This has been a terrible blow to a very fashionable idea.  That’s why it’s embarrassing to dwell on Pol Pot.  Pol Pot is not a maniac.  He’s a man who studied the future for his country for years starting in France, and the whole Khmer Rouge movement was probably as rational an undertaking under a Marxist ruler as has ever occurred.  Everywhere the experts have put socialism into effect, the result has been the gulag.  Now to point this out is to be regarded as right wing.  I regard it only as obvious – so obvious, in fact, that you have to be crazy to avert your eyes from it.

On why writers like Hemingway and Mailer are interested in fighters and “people who got their hands dirty”:

For this analysis, I go to Sigmund Freud.  He said that writers and artists are people who discovered as youngsters that they lost out in the hurly-burly of the playground.  They discovered, however, that they had the power to fantasize about such things, about the fruits of power, such as money, glory and beautiful lovers.  In a way, that resonated with the fantasies and dreams of other people who were not so talented.  When they are successful in presenting these fantasies to the public, they end up achieving through fantasy that which they were previously able to achieve only in fantasy.  But somehow it’s not enough to be known as someone who is a skilled fantasist.  That is second best; it would have been much better to have ruled the playground.  So they constantly try to prove to themselves that they can rule the playground if they really try.  But only rarely do you run into an obsession like that.

Wolfe later mentions he things handguns should be banned:

I think if manufacture and sale stopped, the price of the ones remaining would go up on the black market.  If it became a felony nationally to possess a handgun and there was a public call to turn them in , I think you’d be surprised at how many would be turned in.

Wolfe had really done his homework to develop his styles.

I really made a concentrated effort to get in the game.  I adapted a lot of things I had run across in graduate school.  For example, there were these early experimental Soviet writers like Aleksei Remizov, Boris Pilniak, Andrei Sobel and the Serapion Brothers.  One of them, Yevegeni Zamyatin, was best known for We, the book that Orwell’s 1984 was based on.  From Zamyatin, I got the idea of oddly punctuated inner thoughts.  I began using a lot of exclamation points and dashes and multiple colons.  The idea was, that’s the way people think.

The four basic techniques of novels Wolfe tried to introduce to nonfiction:

The first is scene-by-scene construction.  In other words, telling the entire story through a sequence of scenes rather than simple historical narration.  Second is the use of real dialogue – the more the better.  The third, which is the least understood of the techniques, is the use of status details.  That is, noting articles of clothing, manners, the way people treat children, the way they treat servants.  All the things that indicate where a person thinks he fits in society and where he hopes to go socially.  The fourth is the use of point of view, which is depicting the scenes through a particular pair of eyes.

Re: psychedelia and mus:

Without that world, without Ken Kesey and the Grateful Dead, there would have been no serious music by the Beatles.  They take off from the Grateful Dead, starting with that album Revolver.  Everything from Revolver on comes out of the American psychedelic world, to which they were turned on by Bob Dylan – in person, in private.  Not by listening to his records, but by getting involved with him personally.

Here’s another thing that’s now like a foreign notion.  The seven deadly sins are all sins against the self.  And this is an idea that’s vanished pretty much.  Lust for example.  The reason that lust in Christian religion was – particularly in the form of Catholicism that originated the seven deadly sins – was considered a sin was not that some man would be leading some nice girl from Akron into white slavery, or the pages of pornographic magazines, but that he would be hurting himself by wasting his spirit on this shallow and pointless, base passion.

I hope editor Dorothy Scura doesn’t mind me quoting so extensively from her book, which is itself a roundup of other interviews.  My goal is simply to share some of these wonderful insights with likeminded readers.