Here’s a piece of advice for anyone who lives in Los Angeles: never, ever drive to Las Vegas.  Somewhere around Barstow you will realize the wisdom in this. If Fate demands you appear in Las Vegas, you gotta fly. If the marginal savings are important to you, you shouldn’t be going to Las Vegas.

(I guess maybe drive if you’re smuggling a trunkload of illegal drugs.) 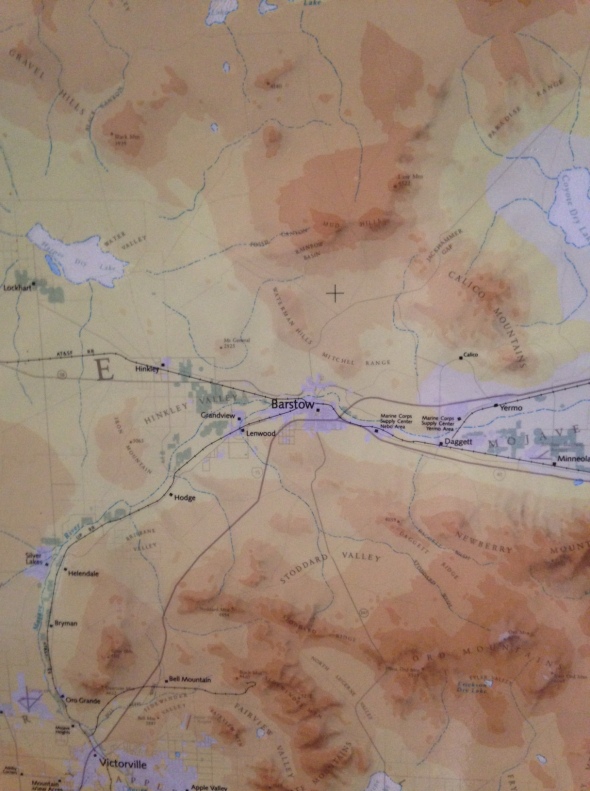 When it comes to airplanes I am Team Window Seat.  You stare out at the weird American landscape for an hour?  It’s better than the best ride at Disneyland.  The best ride at California Adventure just simulates being in an airplane over California.

But of course you need a good album to listen to.

The other day I put out requests for good music on Twitter and got many wonderful and thoughtful responses.

A band that kept coming up is War On Drugs.

Had only kind of heard of these dudes.  But my memory was jogged.  I realized I went to high school with the singer of this band.  If I remember right he was a very good, decent, and funny dude.  I can’t remember if he was on the cross-country team or not; I think so?  Regardless this would be a good album to listen to on a November ride to the New England Class C Championships.

Another suggestion I got pretty into is “What Did You Expect From The Vaccines?” by The Vaccines:

One of the most passionate responses came in from New York’s Tom Ceraulo, and I turn it over to him:

Okay so Old ’97s MOST MESSED UP (my favorite album by a band I’ve been a fan of forever, going to see them tonight and I’m particularly excited to hear the new stuff), Joe Henry’s INVISIBLE HOUR (consistently terrific songwriting & spare, lived-in arrangements that let the songs breathe), and Sturgill Simpson’s METAMODERN SOUNDS IN COUNTRY MUSIC (an amazing dose of bona fide outlaw country with some genuinely exciting twists – produced by Dave Cobb, who produced Jason Isbell’s stunning SOUTHEASTERN from last year) are great, as I mentioned. Some others:
The War on Drugs – LOST IN THE DREAM (might be the best album of the year, I can’t stop listening to it)
Hamilton Leithauser – BLACK HOURS (the former frontman of the Walkmen)
Bob Mould – BEAUTY & RUIN (another loud rock album from Bob with the super talented and ever-entertaining Jon Wurster on drums)
Sharon Van Etten – ARE WE THERE (heart/gut-wrenching beauty from a Brooklyn singer-songwriter who keeps getting better)
Willie Watson – FOLK SINGER VOL. 1 (did you see the Showtime documentary on the Inside Llewyn Davis concert?  He’s the guy who did Midnight Special – produced by Dave Rawlings)
Joseph Arthur – LOU (quiet and tasteful collection of Lou Reed covers)
Lykke Li – I NEVER LEARN (a beautiful breakup record, epic in sound if not length)
Damon Albarn – EVERYDAY ROBOTS (I think people would prefer if he put out a Blur record but I quite like this)
Rosanne Cash – THE RIVER AND THE THREAD (beautiful new Rosanne songs, beautiful production by John Leventhal)
I could go on (The Hold Steady, Woods, Lake Street Dive…) but I won’t because I have to run to the show.  Oh, and if you like jazz I might have some more to give you.  Most people hate jazz though.  Or think they do.

Thanks Tom!  Incidentally Tom is quite the soft touch in terms of Twitter favoriting (54 thousand!), a testament to his generous spirit.

(photo of Barstow from Trainweb.org)