← spaghetti [reblog]
Maybe you guys both need to chill? →

If you don’t follow Australia as closely as we do here at Helytimes, you may have missed a good scandal.

Thirty-eight Australians were killed when Malaysia Airlines 17 was shot down over the Ukraine in July.  In anticipation of encounters with Vladimir Putin in Beijing and then Australia for the G20 summit, Australia’s prime minister Tony Abbott said (on a pretty bland TV interview it appears, hard to find the all important context) he would “shirtfront” Putin:

Urban Dictionary tells us shirtfront is:

A brutal shoulder charge in Australian rules football (AFL) where a player instead of tackling an opponent, bumps them forcefully in the chest. Often leads to heavy concussions due to incidental contact to the head.

One is reminded of Arthur Ashe’s remark about Australian English:

Australian English is a barroom language. It is not a language for a woman.

Now, everyone knows that nothing infuriates Australians like promising them violence and then not delivering.  So imagine how they took it when here’s what happened instead:

Not only did he not shirtfront, it looked like he gave Putin the best koala. 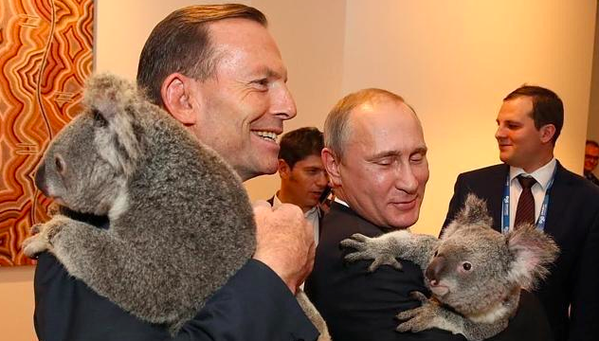 There’s even a sub-scandal about a sarcastic news segment that aired about the shirtfronting (you can watch it here – I think it’s been inaccurately described as a “skit”).  The perpetrators have been sentenced to Australia’s cruelest punishment:

The ABC is being urged to have a “long, hard think” about a skit it aired mocking the Prime Minister’s threat to shirtfront the Russian President over the MH17 tragedy with Julie Bishop warning it had the potential to devastate the families of the victims.

(Australia you know I love you baby)