← Is it OK to love Serial?
spaghetti [reblog] →

Where does LA tap water come from?

Where does LA’s water come from?

Although the exact percentages can change dramatically from one year to the next, generally L.A. gets about half of its water from Northern California and the Colorado River, 10 percent from local groundwater sources, and a third from the Owens Valley

says this helpful post on KCRW’s blog.  (Only adds up to 93%, which is worrisome.)

That’s the Owens River, and it feeds into Owens Lake.  If Owens Lake sounds nice to you, terrific, apparently it was, once.  There are accounts of clear water, and great ducks that swam there, ducks exploded in yellow fat when shot.  Here’s what Owens Lake looks like now:

Photograph taken on 5 April 2009 by Charles W. Hull and posted on DVInfo.

Here it is on my Raven Map of California:

It’s crazy how far away it is from LA:

How did LA get this water?:

Eager to find water for the growing metropolis, Los Angeles had agents pose as farmers and ranchers to buy water and land rights in the valley.

People in the Owens Valley are still pissed about this water thievery.  Here is my bud in front of an LA DWP sign sternly claiming this watery spot some 196 miles from downtown LA:

If you can’t read the graffiti it says “Fuck LA and the horse it rode in on.”

But, progress.  That quote comes from this LA Times article I happened to pick up.

LA has sucked the Owens Lake so dry that the big problem there now is dust.  The old way they used to suppress the dust, was, weirdly, flooding.  Now they’re switching to a new method:

It involves using tractors to turn moist lake bed clay into furrows and basketball-sized clods of dirt. The clods will bottle up the dust for years before breaking down, at which point the process will be repeated.

This is way better, apparently:

The new process, which starts in December, is expected to save nearly 3 billion gallons of water its first year, rising to nearly 10 billion gallons three years later. Most of that water will be put back into the aqueduct.

City officials singled out Schade for praise Friday. Garcetti described him as “a truly great environmentalist.”

The comments marked a reversal by a city that just a few years ago made him the target of a barrage of DWP lawsuits, including one accusing him of issuing unreasonable and unlawful orders. The city asked to have him barred from presiding over decisions affecting the city.

Ron Nichols, DWP general manager at the time, said in a statement then that “our water consumer will no longer be victimized by an unaccountable regulator.”

Schade was abandoned by many Owens Valley community leaders and environmental activists who feared that standing up in his defense would risk retribution from DWP.

That federal court lawsuit was dismissed a year later.

This week, Schade, 57, stood on a berm in a portion of the dry lake recently tilled to test the effectiveness of the new dust suppression method.

“I’ve been at war with the DWP for 24 years, two months and 15 days,” he said. “The fighting is over, and the path forward is clear. So, I’m resigning in December. My job here is done.” 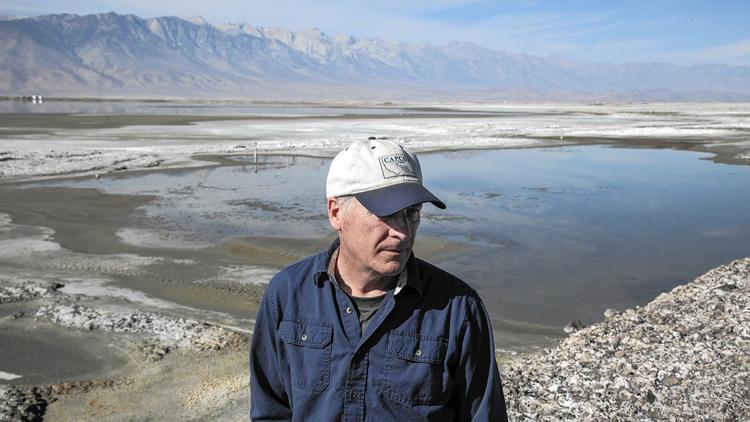 Ted Schade, enforcement officer for the agency in charge of Owens Valley’s air quality, is a longtime nemesis of the DWP. But L.A. Mayor Eric Garcetti, in announcing the new agreement, praised him as “a truly great environmentalist.” (Don Kelsen / Los Angeles Times)

Owens Lake isn’t even the biggest massive dried up lake in California.  That honor (?) belongs to Tulare Lake.

from an 1871 Southern Pacific railroad map in the Historical Atlas Of California.

That’s way up in the tule country.  And don’t even get me started on the Salton Sea, which I guess is the reverse of a shrinking lake.

Here’s another pic from the Owens Valley: