← There are no coincidences.
Good one from cuz →

You once told me that the most difficult thing for a writer to write was a simple household note to someone coming to collect the laundry, or instructions to a cook.

What I was thinking of was a note I had to write to the teacher when one of my children missed a day of school. It was my daughter, Caroline, who was then in the second or third grade. I was having my breakfast one morning when she appeared with her lunch box, her rain slicker, and everything, and she said, “I need an absence note for the teacher and the bus is coming in a few minutes.” She gave me a pad and a pencil; even as a child she was very thoughtful. So I wrote down the date and I started, Dear Mrs. So-and-so, my daughter Caroline . . . and then I thought, No, that’s not right, obviously it’s my daughter Caroline. I tore that sheet off, and started again. Yesterday, my child . . . No, that wasn’t right either. Too much like a deposition. This went on until I heard a horn blowing outside. The child was in a state of panic. There was a pile of crumpled pages on the floor, and my wife was saying, “I can’t believe this. I can’t believe this.” She took the pad and pencil and dashed something off. I had been trying to write the perfect absence note. It was a very illuminating experience. Writing is immensely difficult. The short forms especially.

from here of course.

The only Doctorow I read is this one, which is great: 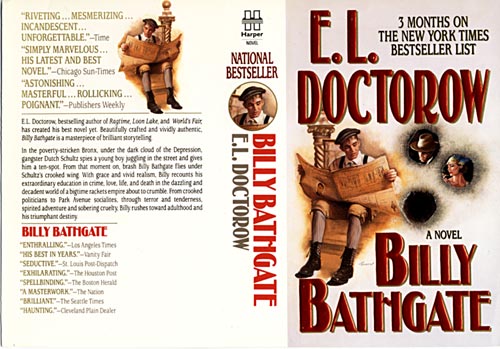 I also read the beginning of this one:

Billy Bathgate has a lot of sexy stuff in it that I really appreciated at the time (16?).  Both books start with one guy violently taking the woman of another guy as the other guy is more or less forced to watch.  It’s pretty primal and intense shit.  Welcome To Hard Times was even a little too much for me.

Well, it can be anything. It can be a voice, an image; it can be a deep moment of personal desperation. For instance, with Ragtime I was so desperate to write something, I was facing the wall of my study in my house in New Rochelle and so I started to write about the wall. That’s the kind of day we sometimes have, as writers. Then I wrote about the house that was attached to the wall. It was built in 1906, you see, so I thought about the era and what Broadview Avenue looked like then: trolley cars ran along the avenue down at the bottom of the hill; people wore white clothes in the summer to stay cool. Teddy Roosevelt was President. One thing led to another and that’s the way that book began: through desperation to those few images. With Loon Lake, in contrast, it was just a very strong sense of place, a heightened emotion when I found myself in the Adirondacks after many, many years of being away . . . and all this came to a point when I saw a sign, a road sign: Loon Lake. So it can be anything.

For describing J. P. Morgan, for an example, did you spend a great deal of time in libraries?

The main research for Morgan was looking at the great photograph of him by Edward Steichen.