Goya, Death of the Picador

How do we decide what’s good or bad, right or wrong?

A interesting question obvs.  One every person answers for themselves somehow.

But how many of us can articulate our answer?

Would you come up with something like “not harming anyone else”?  Living with honor and honesty and compassion?

Really, I doubt most of us bother to articulate a moral philosophy or definition of morals.  We sorta just go with what feels right or wrong.

This is a quote attributed to Hemingway.

One thing I think is wrong is quote sites that don’t include the source or context for the quote.

As always, hunting the source proves enriching.  Hemingway said this in chapter one of his book Death In The Afternoon.

Back up just a few pages.  Here’s how Hemingway starts the book: 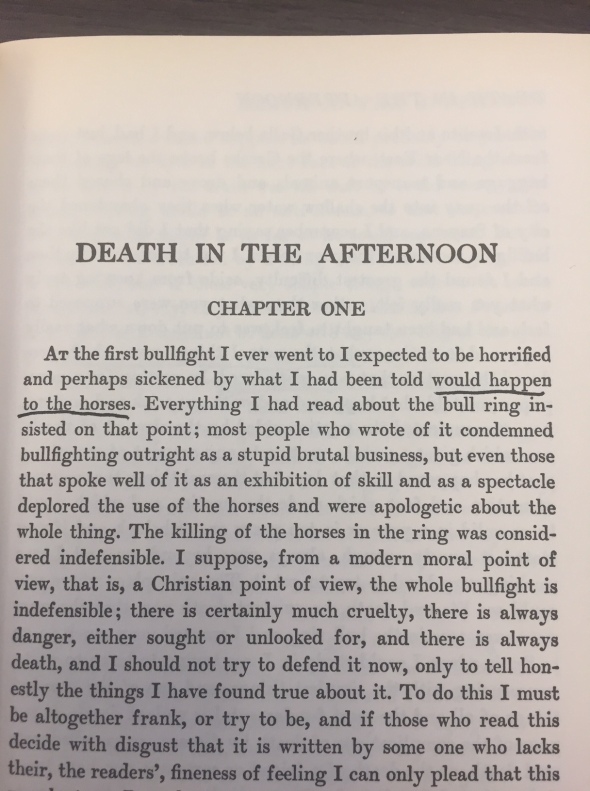 In Hemingway’s day, what was most repugnant about bullfighting was the suffering of horses.

Horses (this is described in the book) would get gored and have their entrails hanging out and trailing like grotesque ribbons.

At what bullfights remain this problem has been mostly eliminated, I believe, by armoring the horses.  At the only bullfight I ever saw in person, the horses were unharmed, though nine bulls were killed, one of them especially tortured because of the incompetence of the matador (lit. “killer”). (This video is upsetting if you don’t like seeing bulls hurt, but you can see how horses are now protected.) 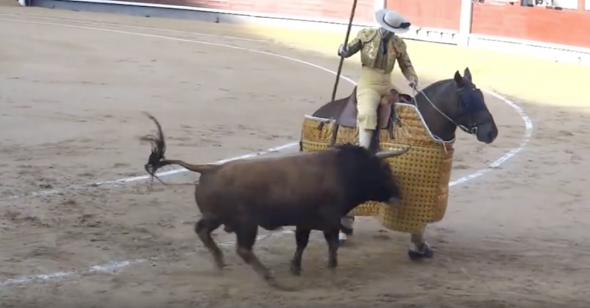 Hemingway continues, justifying why he got into bullfighting even though he likes horses:

I was trying to write then, and I found the greatest difficulty, aside from knowing truly what you really felt, rather than what you were supposed to feel, and had been taught to feel, was to put down what really happened in action; what the actual things were which produced the emotion that you experienced.

A theme Hemingway came back to frequently.

So I went to Spain to see bullfights and to try to write about them for myself.  I thought they would be simple and barbarous and cruel and that I would not like them, but that I would see certain definite action which would give me the feeling of life and death that I was working for.  I found the definite action ; but the bullfight was so far from simple and I liked it so much that it was much too complicated for my then equipment for writing to deal with and, aside from four very short sketches, I was not able to write anything about it for five years — and I wish I would have waited ten.  However, if I had waited long enough I probably never would have written anything at all since there is a tendency when you really begin to learn something about a thing not to want to write about it but rather to keep on learning about it always and at no time, unless you are very egotistical, which, of course, accounts for many books, will you be able to say: now I know all about this and will write about it.  Certainly I don not say that now ‘ every year I know there is more to learn, but I know some things which may be interesting now, and I may be away from the bullfights for a long time and I might as well write what I know about them now. Also it might be good to have a book about bullfighting in English and a serious book on such an unmoral subject may have some value.

So far, about morals, I know only that what is moral is what you feel good after and what is immoral is what you feel bad after and judged by these moral standards, which I do not defend, the bullfight is very moral to me because I feel very fine while it is going on and have a feeling of life and death and mortality and immortality, and after it is over I feel very sad but very fine.  Also, I do not mind the horses; not in principle, but in fact I do not mind them.

Just thought is was interesting, this succinct definition of morality came in the context of why it shouldn’t bother us to see horses mangled during the ritual killing of bulls.