← Statues of Beverly Hills
When The World’s On Fire →

The Civil War in Arkansas

Traveling through Arkansas last spring, I tried to wrap my head around the Civil War as it played out there.

Like, what happened here?  At some point did a Union army march through here?

There were 11,481 slaveowners in Arkansas.

Much of Arkansas at that time was wilderness.  The big plantations were down in the Delta, the low bottom country in the south and east of that state, along the alluvial Mississippi floodlands, seen here on Raven’s excellent topographical map.

Here on the 1861 Coast Survey map of slave population, we can see where Arkansas slaves were: 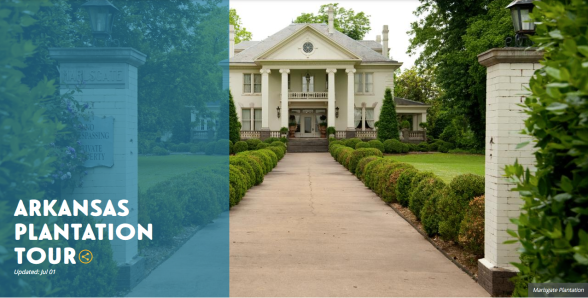 Everyone needs a getaway once in a while. A getaway from the job, the house, the day-to-day routine and yes, even those that mean the most to us – our families.

reads the copy on this guide to touring the still-standing plantation houses of Arkansas.  Presumably a getaway was not an option in 1860 for the 111,115 slaves.

In May, 1861, Arkansas seceded from the United States.  At the secession convention, Isaac Murphy was one of the few no votes:

The convention voted to take Arkansas out of the Union, but Murphy and four other delegates opposed this step. The convention chair called on the five to switch their votes. All four of the other “nay” delegates changed their votes, but Murphy refused. Initially his position was popular in Huntsville, but as the war went on, Confederate sentiment increased.

About a year later, in spring, 1862, Union General Samuel Curtis marched in from Missouri, leading volunteer regiments from Missouri, Illinois, Ohio and Indiana (mostly).  At the battle of Pea Ridge he drove back the Confederate forces sent to stop him.

Curtis kept on marching his army across Arkansas, following more or less the course of the White River. 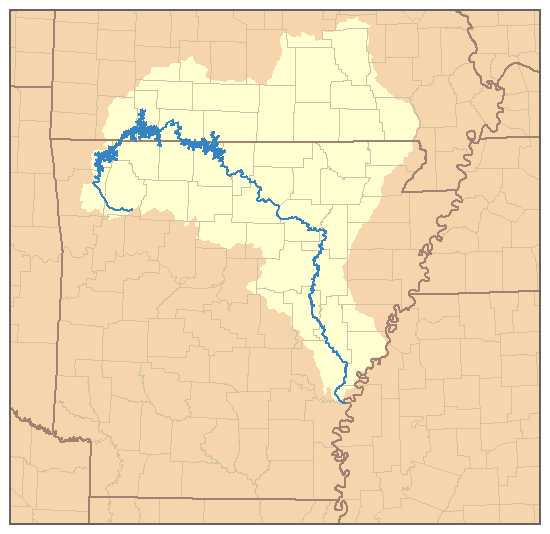 As Curtis marched along, he picked up thousands of freed slaves.

Curtis was stifled in his effort to capture Little Rock by lack of supplies (his guys were pretty much living off the land) and by the forces raised by Confederate general Thomas Hindman. 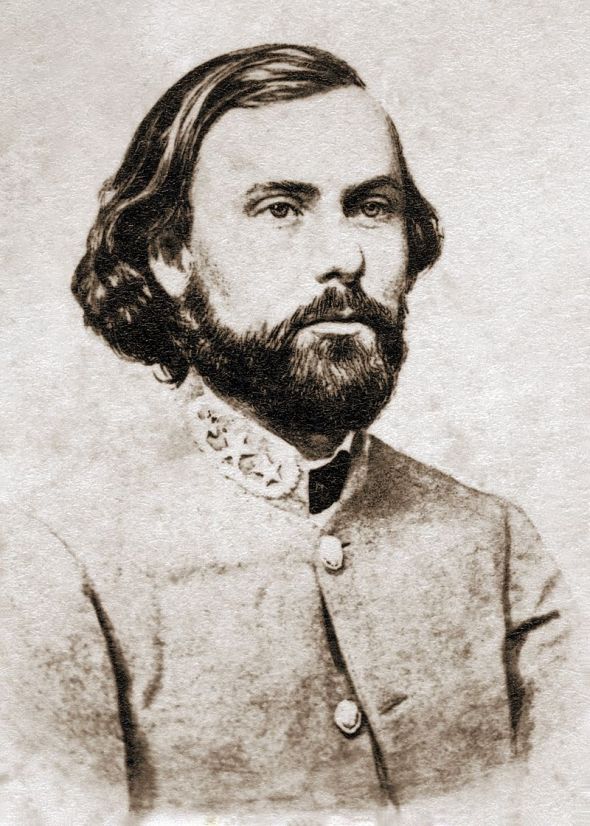 Hindman’s General Orders Number 17 instructed “all citizens from this district” to organize themselves into ten-man companies under elected captains and start killing Yankees.  An estimated 5,000 men responded to this summons by August 1862.  They may not have been a decisive factor in Samuel Curtis’ failure to take Little Rock, but they aroused the ire of Union forces by picking off sentries and couriers, ambushing small patrols and foraging parties, and firing on gunboats and transports.  Federal commanders announced that they would hold civilian responsible for any guerrilla activity occurring in their vicinity.   When warnings failed to restrain the irregulars, details of Union soldiers and sailors began burning small hamlets or individual houses and barns.  This retributive strategy caused many Arkansans to abandon their homes in the delta and north of the Arkansas River, but it did not suppress guerrilla depredations.

Curtis and his army (and irregular army of freed slaves) crossed the state, and reached Helena, on the Mississippi river.  From there he could be resupplied by river since by now the Confederate river navy had been pretty much destroyed.  Memphis had fallen, giving a clear path along the Mississippi north of Vicksburg.

As for Hindman, he got a fort named after him, at Arkansas Post, where the Arkansas River forks off and heads towards Little Rock.  This was in important spot, and some Confederates from Texas held it until the Union Navy came up there in January, 1863, and blew it away.

Hindman was replaced by Theophilus Holmes 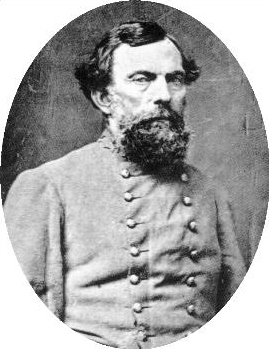 Jefferson Davis begged Holmes to bring his troops out to help relieve the tightening siege at Vicksburg, across the river in Mississippi.  But Holmes had his own problems.  Says Wikipedia (lifting from Walter Hilderman’s biography):

For the most part, the Confederate forces in this remote area were little more than a disorganized mob of militia scattered across all corners of the state. There were few weapons available and even fewer modern ones. The soldiers for the most part had no shoes, no uniforms, no munitions, no training, organization, or discipline, a situation worsened by the fact that many communities in Arkansas had no government above the village level. People did not pay taxes or have any written laws and strongly resisted any attempt to impose an outside government or military discipline on them. Soldiers in the Arkansas militia did not understand the organization of a proper army or obeying orders from above. Even worse, many of them were in poor physical condition and unable to handle the rigors of a lengthy military campaign. Holmes for his part believed that he could muster an army of about 15,000 men in Arkansas, but there would be almost no competent officers to lead it anyway. Further compounding his difficulties were multiple Union armies converging on the state from all sides. In this situation, Holmes wrote to Richmond that if by some miracle, he could organize the Arkansas militia into an army and get them across the Mississippi River, they would simply desert as soon as they got to the east bank.

On July 4, 1863, Vicksburg fell.  On that day, a bit late, Holmes attacked the Union forces at Helena, Arkansas

but they were blasted away both by Union troops in the city and massive gunboats in the river.  A disastrous, pointless defeat, too late to do any good even if it hadn’t failed.

With the fall of Vicksburg (and the last ditch failure at Helena) the Union had control of the entire Mississippi River.  Gen. Fredrick Steele was sent out across the river and into Arkansas:

Steele and his army of Wisconsins, Illinoisians, and German immigrants arrived in Little Rock by September, 1863.  The Confederate state capitol had been moved to Washington, Arkansas.

When spring began in 1864, Steele marched his army toward Washington, AR. (Here is an excellent map of how this went down).  Steele had something like 7,000 soldiers.  Steele was supposed to eventually meet up, in Shreveport, Louisiana, with General Nathaniel Banks and his 30,000 guys from the Department of the Gulf.

Traveling cross country in this hot and hostile part of the world was not easy.  By the time Steele got to Camden, Arkansas, his guys didn’t have anything to eat, and word reached him that Banks’ army had been stopped anyway.

Steele had with him the 1st Kansas Colored Infantry, and he sent them out to collect some food.  At Poison Spring, they were surrounded by the Confederate Second Indian Brigade or Choctaw Brigade. 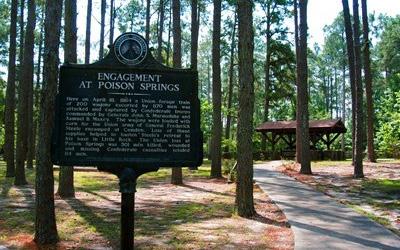 I feared here that the train and its contents would prove a temptation too strong for these hungry, half-clothed Choctaws, but had no trouble in pressing them forward, for there was that in front and to the left more inviting to them than food or clothing—the blood of their despised enemy.

They set on the 1st Kansas Colored.

In all, the 1st Kansas lost nearly half of its numbers.

After this defeat, running out of food, with the planned meetup unlikely to come off, Steele decided to retreat back to Little Rock.  When he got as far as Jenkins Ferry, in the pouring rain, he realized the Confederates were about to catch up to him.  So he had his guys dig in.  Steele’s troops killed some unknown number of the attacking Confederates.

What a mess that must’ve been.  After the turnaround of the Camden expedition, the Union army stayed near their bases in the cities.  Confederate marauders rode all over the place.  Colonel Marcus LaRue Harrison led the Unionist 1st Arkansas Cavalry:

Harrison established a network of fortified “farm colonies,” populating them with the families of men who swore to serve in home guard companies.  Anyone living within ten miles of a colony had to join it or was assumed to be a bushwhacker.

Naval History: It has always been frustrating that the Western rivers get hardly any play in Civil War History.

Foote: Well, the whole Western theater gets hardly any play.  I sometimes think that the people in this country who know less about the Civil War than any other one group of people are Virginians.  They may know a little more than South Dakotans, but that’s about all.

They think that the war was fought in Virginia, while various widespread skirmishes were going on out West.  The opposite is closer to the truth

Looking for more info about Jenkins Ferry I found this picture on the Grants County Museum page, seems like the situation in that area has improved.

Most of the Confederate regiments raised in Arkansas served in the western theater.  An exception was the 3rd Arkansas Infantry Regiment, sent to Lee’s Army of Northern Virginia.

When General Robert E. Lee surrendered at Appomattox Courthouse on April 9, 1865, only 144 men of the Third Arkansas remained out of the 1,353 mustered into it from the start of the war

Here is their battle flag.

After the failure of the Camden expedition, the Confederates had about 100 encampments in south Arkansas.  Where do I get that number?  From this incredible book:

This book is a digitized version of the maps Confederate engineer Richard M. Venable made in 1864.  Venable and his guys were only able to reconnoiter the southern 29% of the state.  I’m not sure whether that was because the northern portion was in Union hands and they couldn’t go there, or if that was just the resources they had, at a time when the Confederates in Arkansas were operating in the south, and might have to make moves further south or west.

The maps in this book are incredibly detailed, you can see, for example, which homesteads in Lafayette County had female heads of household, and which were the houses of widows.

Here’s a thorough review of the book.  I was really impressed by it, it’s rare to find historic maps at this level of detail and readability, as the review notes, this was “obviously a labor of love.”  How much need you have in your home for a detailed atlas of 1864 Arkansas is for you to determine, but for me it did make the past come alive.  If you’re doing any traveling in the state of Arkansas and you’ve read this far in HelyTimes, consider investing in a copy.  (hell I’ll loan you mine.)

When did the Civil War really end in Arkansas?  In a special election in 1863, Isaac Murphy was elected governor:

He presided until 1868.  By 1874 there was close to an armed conflict over who would run Arkansas, and that was pretty much the end of Reconstruction in the state.

The following 35 governors of Arkansas, ruling for a total of 90 years, were all Democrats, until Republican Winthrop Rockefeller became governor in 1966 defeating James D. Johnson.

Or maybe it ended with the election of Arkansas governor Bill Clinton.