I’ve had Hillary’s book staring back at me on my desk for weeks now.  It’s pretty boring, here’s a passage more or less at random: 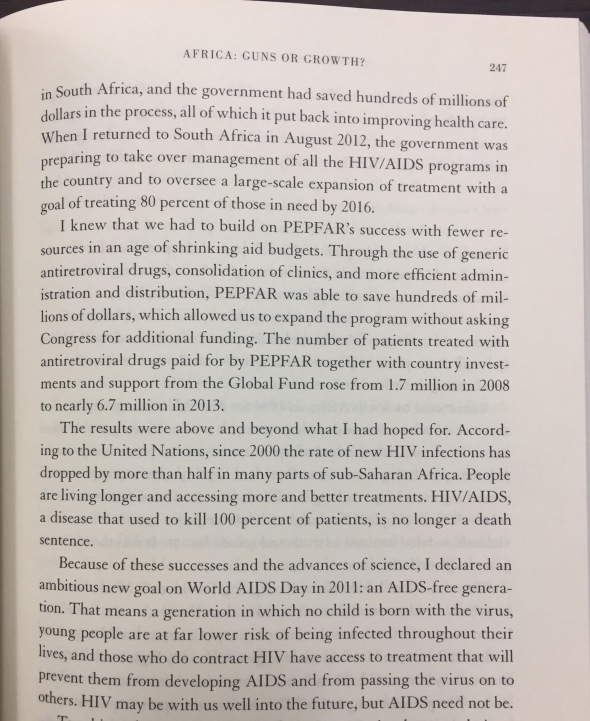 On the other hand, increasingly convinced that politics should be boring.  The thesis of the book might be that life, especially international relations and politics, is full of hard choices with no good answer.  She seems dedicated to taking on the grim, serious job of making those hard choices, and determined to make those in sober and rational ways.  Recommend reading this NY Times article: 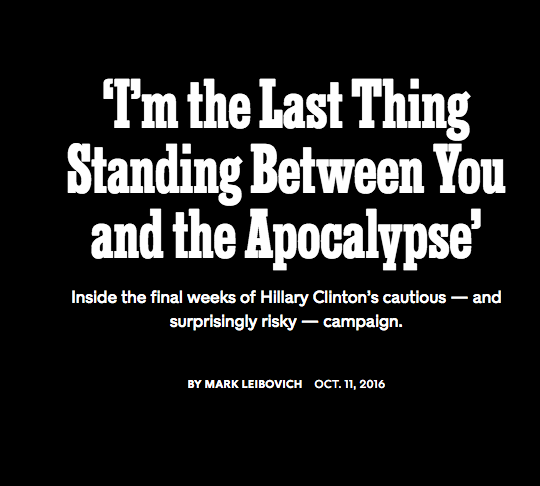 “Near existential” is how Tim Kaine recently described this campaign, and it did not come off as complete hyperbole.

Trying to wrap your head around Trump:

the blustering mogul had endured — or rather perpetuated — a series of self-immolations that included a fat-shaming Twitter assault on a Latina beauty queen (one of those things you never thought you’d write during a presidential campaign, and yet it barely registers a blink), a few pages of his 1995 tax return finding its way to The New York Times and the ensuing revelation that Trump had declared a $916 million loss, which could have enabled him to avoid paying 18 years’ worth of federal taxes.

“It does feel much different,” she said. “If I were running against another Republican, we’d have our disagreements, don’t get me wrong, and I would be trying to make my case vigorously. But I wouldn’t go to bed at night with a knot in the pit of my stomach.” She enunciated her T’s (“knoT in the piT”) as if she were spitting out the words.

The mentality at her level:

This is the standard politician’s answer when asked to contemplate defeat — even candidates who are down 30 points — but Clinton seemed to mean it. “I don’t go there,” Clinton said. Trump is such an unnerving figure, partly because in getting this far he has already defied so many predictions, largely on the strength of his ability to command the media fun house. This has been the enduring, defining characteristic of the race. His mania for being seen and heard and mentioned has proved exceptionally well suited, maybe codependent, to the current age.

Bill Clinton’s campaigns for governor of Arkansas were relatively simple, small-scale and stable productions, conducted via traditional television, news radio and print outlets. But from the moment the Clintons went national in the early 1990s, their ambitions have met head-on with a series of transformative new media adversaries. His presidency was the first to suffer a sustained assault from conservative talk radio, particularly in its first term, when Rush Limbaugh was establishing himself as the most influential radio host of his generation. The Monica Lewinsky scandal and Clinton’s subsequent impeachment were driven heavily by revelations on a new website, the Drudge Report, and covered exhaustively by the emerging force that cable news was becoming.

[Hillary] described a meeting with a group that had developed online mental-health programs. One woman predicted to her that a big challenge in mental health over the coming years would be “how to undo the damage that the internet has caused young people.”

…Trump, of course, both shares and feeds his audience’s addiction to stimuli and entertainment.

I mean this is a shameless, but kind of cool move?:

He can be undeniably fun and, to a point, seductive. My first encounter with Trump, more than a year ago, came in an unsolicited note that said simply, “Mark, It’s Time for a Cover!”

Is this true or a cutesy fiction?:

“My husband and I laugh sometimes about the ‘Antiques Roadshow,’ ” Clinton told me, referring to the PBS show about antique appraisers that she watches devoutly. “Sometimes we feel like we are the antiques on a roadshow when it comes to politics.”

A view of the media:

There are many more women and minorities in the group (as in, there are more than almost none); there is considerably less drinking, and no one smokes; and while reporters 40 years ago paid their dues and scrapped like hell to cover a presidential campaign, many of today’s cast members are in their first journalism jobs. They are competitive but collegial. Their tech savviness is astounding (actually it made me scared). It’s easy to see why a control-freakish enterprise like the Clinton campaign might be terrified of an army of smartphone dynamos who are just dying to tweet out what color cough drops the candidate was popping (Halls, yellow).

People inside the Clinton orbit mourn the familiar shirts and skins of going up against a more conventional Republican nominee. They dealt in familiar Republican themes and operated within certain boundaries. You hear a surprising amount of Romney nostalgia: Several Clinton aides I spoke to brought him up in almost wistful terms, as well as John McCain and George W. Bush. They are now fondly recalled as familiar predators in the political habitat, like the characters from that old cartoon “Ralph Wolf and Sam Sheepdog.”Ralph and Sam show up to work, punch the clock and greet each other amiably before starting their daily game — Ralph trying to corral sheep while Sam thwarts him. Each episode ends with the adversaries punching out their timecards and bidding farewell to each other until the next installment.

Whenever she is asked questions that touch on possible sexism and double standards, Clinton tends to assume a slow, sarcastic and vaguely disdainful voice. She declared the topic “interesting”; she would “leave it to others” to determine. On whether she is being treated differently as a female candidate, Clinton suggested that it would be a great topic, in the future, for “a lot of Ph.D. theses and popular journalism writing.” She then wrapped things up, disappeared behind her curtain and left us to our “popular journalism writing.”

A scene from the plane:

“O.K., so I was back here a few minutes ago, and everyone was laughing and throwing an orange around,” Merrill said, assessing the situation. “And now I come back again, and suddenly everyone is really tense.” Correct. In any case, Merrill clarified that the clementine had not actually reached Clinton, but rather he picked it up first and read the question aloud. To which Clinton remarked that she had once eaten dinner with Putin. Merrill then circled “Putin” and rolled back the clementine.

Everyone tweeted out Merrill’s clarification. The tension lifted; Merrill headed back to the front cabin and, as he passed my seat, said, “I can’t wait to read four paragraphs of this stupidity in your magazine story.”

I thought this was a rare slip:

After Bill Clinton was elected, his wife vowed that every letter sent to the White House, especially from a child, would receive a response. I have no idea how well they actually executed on this, but Clinton was making a bigger point here, about the importance of connection and the sharing of stories in a political world overrun by snapshots, caricatures, fragmentation and reality distortion.

Well I mean aren’t you a reporter?  Find out!

Earlier [Hillary] had mentioned the 1985 book “Amusing Ourselves to Death,” by Neal Postman, about how television has oriented politics more and more toward entertainment.

Interesting!  I no longer have my copy, but I remember Postman predicted exactly The Daily Show: a parody news show would arise that would show how ridiculous TV news was, but that the stars of the parody show would inevitably become famous themselves and continue the cycle of amusement without confrontation?  something like that.

The secret key to Hillary?:

In college in the late 1960s, she resisted revolutionary change in favor of grinding out incremental progress inside the system. She has no patience for messianic rhetoric and hyperbolic slogans and grandiose speeches.