I’d heard of it, but I’m not sure I really got how infuriating”mansplaining” might be until I saw this.  JCO wakes up, finds out she didn’t win the Nobel Prize, puts out some interesting thought about it, and: 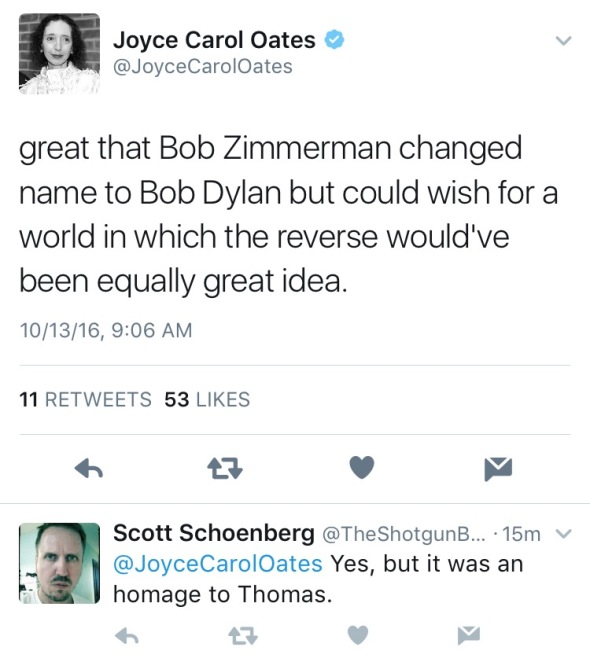 Congratulations to Mr. Dylan.  Some previous coverage on Helytimes about Chronicles here and a wild Rolling Stone interview here.

Reading about the Nobel Prize leads me to the Wiki page of Harry Martinson, Swedish sailor/poet, who shared the prize in 1974. Apparently it didn’t work out so great:

The joint selection of Eyvind Johnson and Martinson for the Nobel Prize in 1974, was very controversial as both were on the Nobel panel. Graham Greene, Saul Bellow andVladimir Nabokov were the favoured candidates that year. The sensitive Martinson found it hard to cope with the criticism following his award, and committed suicide.

The source appears to be this Aftonbladet article, where Google Translate helps me out:

One of the things that upset him most was the treatment of Harry Martinson and Eyvind Johnson. When they received the Nobel Prize in 1974 started a rancorous debate.The media ran went on the cultural pages where the two Swedish authors was weighed and found to be too light in the Nobel Prize Context. Were driven to mental collapse – It broke down Harry Martinson completely.He became obsessed with the sordid and arrogant criticism. Everyone knew he was fragile, he was dependent on his ability to enchant since childhood.Johnson did better, says Lars Gyllensten.Harry Martinson was driven to a mental breakdown and committed suicide in 1978.- He killed himself, committed harakiri with a pair of scissors on the psyche of the Karolinska Hospital.Reputation flora after his death began immediately.

As good occasion as any to reread Faulkner’s 1950 banquet speech:

I feel that this award was not made to me as a man, but to my work – a life’s work in the agony and sweat of the human spirit, not for glory and least of all for profit, but to create out of the materials of the human spirit something which did not exist before. So this award is only mine in trust. It will not be difficult to find a dedication for the money part of it commensurate with the purpose and significance of its origin. But I would like to do the same with the acclaim too, by using this moment as a pinnacle from which I might be listened to by the young men and women already dedicated to the same anguish and travail, among whom is already that one who will some day stand here where I am standing.

Our tragedy today is a general and universal physical fear so long sustained by now that we can even bear it. There are no longer problems of the spirit. There is only the question: When will I be blown up? Because of this, the young man or woman writing today has forgotten the problems of the human heart in conflict with itself which alone can make good writing because only that is worth writing about, worth the agony and the sweat.

He must learn them again. He must teach himself that the basest of all things is to be afraid; and, teaching himself that, forget it forever, leaving no room in his workshop for anything but the old verities and truths of the heart, the old universal truths lacking which any story is ephemeral and doomed – love and honor and pity and pride and compassion and sacrifice. Until he does so, he labors under a curse. He writes not of love but of lust, of defeats in which nobody loses anything of value, of victories without hope and, worst of all, without pity or compassion. His griefs grieve on no universal bones, leaving no scars. He writes not of the heart but of the glands.

Until he relearns these things, he will write as though he stood among and watched the end of man. I decline to accept the end of man. It is easy enough to say that man is immortal simply because he will endure: that when the last dingdong of doom has clanged and faded from the last worthless rock hanging tideless in the last red and dying evening, that even then there will still be one more sound: that of his puny inexhaustible voice, still talking.

I refuse to accept this. I believe that man will not merely endure: he will prevail. He is immortal, not because he alone among creatures has an inexhaustible voice, but because he has a soul, a spirit capable of compassion and sacrifice and endurance. The poet’s, the writer’s, duty is to write about these things. It is his privilege to help man endure by lifting his heart, by reminding him of the courage and honor and hope and pride and compassion and pity and sacrifice which have been the glory of his past. The poet’s voice need not merely be the record of man, it can be one of the props, the pillars to help him endure and prevail.

Damn.  You can also have Faulkner read it to you if you have three minutes: