I, Albrect Dürer of Nuremberg painted myself thus, with undying color, at the age of twenty-eight years.

So says the writing on this one.  Whether the color is “undying” we’ll see*.  The painting is five hundred and eighteen years old.

What was going on with Northern Renaissance art?  After a visit to the San Diego Art Museum, decided to buy myself a book about what SDMA calls “early Netherlandish art.”

This is the book that I got, and I love it and recommend it.  Beautiful, readable, dense, one of the best art history books I’ve ever gotten into.  Susie Nash is an expert on the Well of Moses, or Great Cross, at Dijon.

The Well of Moses was commissioned by Philip the Bold, who through his “brilliant marriage to the heiress Margaret of Flanders” brought that region into Duchy of Burgundy.  Claus Sluter, the sculptor made the pleurants, “the Mourners of Dijon,” for the tomb of Philip.  I saw these when they came through the Met years ago.

By the time Philip the Bold’s grandson, Philip the Good, was Duke of Burgundy, the Burgundian chunks of the Netherlands, Belgium, Luxembourg and northern France were rich, full of prospering towns with craftsmen of all kinds, and fledgling networks of banking and trade, and ancient churches and castles.

The gem may have been Bruges, kind of an international banking/trade center, the Hong Kong of its day(?)

in Bruges a clause in the carpenters’ and sculptors’ guild by-laws allowed craftsmen to work at night when “a sale or contract has been made with a merchant (whose) ship is there ready to sail.”

Between The Hundred Years’ War and a mad King, France was suffering.  Paris had kind of gone to shit around 1420.

There were all kinds of wonderful and wild things being made in the Northern Renaissance: tapestries, illuminated books, glass and brass.  Statues of the Christ Child with jointed arms.  Says Nash:

The ability to dress sculpture and adapt it in various ways was also key to the popularity of life-size carved and painted Christ Child figures, which might have jointed arms and their own set of clothes, some of which survive today.  These figures could be used for more intimate devotional activities.  Textual sources from female convent communities concern the part played by these and similar figures of the Christ Child with its crib in contemplative and richly imaginative activities, during which the nun was encouraged to pick up the child, suckle it, and so on.

Nash places a lot of this work in the context of a tradition of contemplation.  You were supposed to really be staring at and contemplating, say, Christ on the cross.

How about the works of Master W with Key?

As for the Dukes of Burgundy, the drama of their lives becomes vivid from even a barebones review of major incidents.  John the Fearless, murdered on the bridge at Montereau, the monk presenting his skull to the King of France: “Sire, this is the hole through which England entered France.”  Charles The Bold, lost in the freezing cold at Nancy, killed by Swiss mercenaries, his body found in a frozen river.  Mary the Rich, and Margaret of Austria, killed by a shard of broken glass. 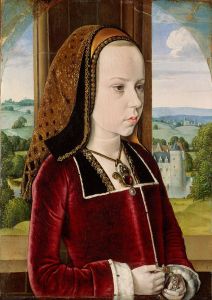 Dramatic centuries followed for this part of the world.  So much of early Netherlandish // Northern Renaissance art was lost or destroyed.  “A wave of iconoclasm swept the Netherlands,” and that was just the beginning.  Nash has a great picture I can’t find online of the city gate of Berne, chopped up for firewood in 1865.  The town halls of Brussels and Paris were both burnt, Tournai and Ypres were bombed and shelled.  The Allies found the Ghent altarpiece in a salt mine.

Last one, from a prayer book made for Margaret Tudor, wife of James IV. 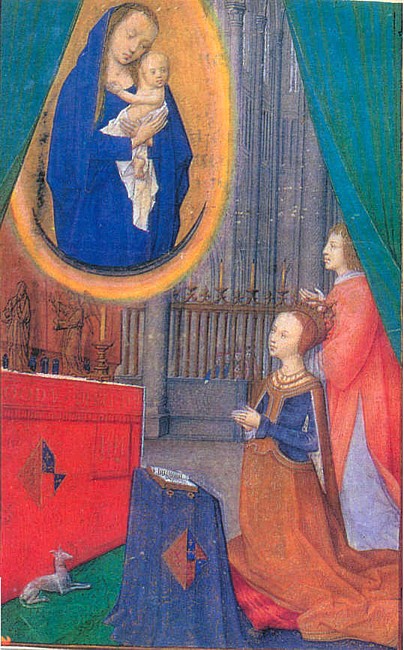 This is not Margaret receiving an actual vision of the Virgin – she was not known as a visionary and indeed was note even particularly devout, if her contemporary reputation is true: she famously requested, on her sickbed, to contemplate a parade of her best dresses instead of a crucifix.

* some controversy over the translation here.  My Latin is rusty but I like “undying” or “everlasting” better than “appropriate.”