Long ago, when I was a young cowboy, I witnessed a herd reaction in a real herd – about one hundred cattle that some cowboys and I were moving from one pasture to another along a small asphalt farm-to-market road.  It was mid-afternoon in mid-summer.  Men, horses, and cattle were all drowsy, the herd just barely plodding along, until one cow happened to drag her hoof on the rough asphalt, making a loud rasping sound.  In an instant that sleepy herd was in full flight, and our horses too.  A single sound on a summer afternoon produced a short but violent stampede.  The cattle and horses ran full-out for perhaps one hundred yards.  It was the only stampede I was ever in, and a dragging hoof caused it. 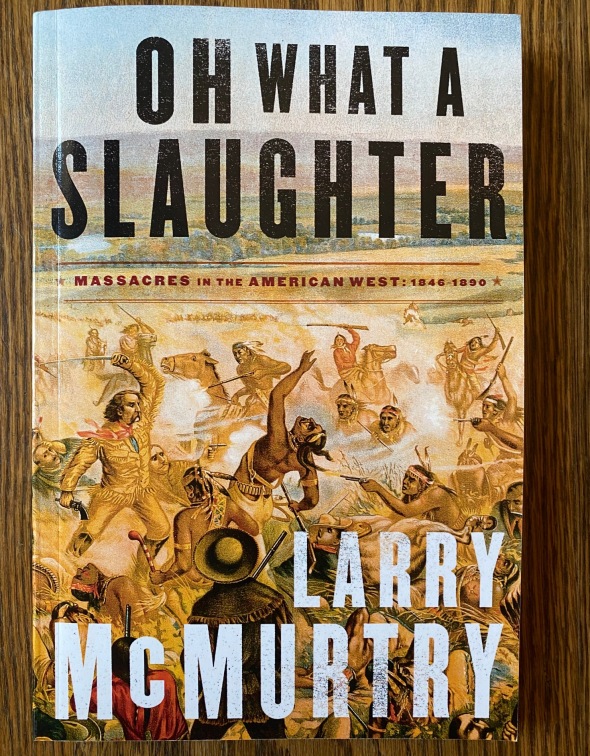 by frequent Helytimes subject Larry McMurtry.  You had me at “Long ago, when I was a young cowboy.”

Oh What A Slaughter isn’t a fun book exactly, but it’s about the most friendly and conversational book you could probably find about massacres.  The style of McMurtry’s non-fiction is so casual, you could argue it’s lazy or bad,

As I have several times said, massacres will out, and this one did in spades.

he says on page 80, for instance.  I suspect it takes work or great practice to sound this relaxed.  The book reads like the story of an old friend, even humorous at times.  There’s great trust in the reader.

One point McMurtry returns to an ruminates on as a cause or at least precursor to these scenes of frenzied violence is apprehension.  People get spooked.  Why did a heavily armed US Army unit watching over – actually disarming – some detained Indians at Wounded Knee suddenly unleash?

The Ghost Dance might have had some kind of millennial implications, but it was just a dance helped by some poor Indians – and Indians, like the whites themselves, had always danced.

McMurtry says.  Yeah, but it put the 7th Cavalry on edge, and they weren’t disciplined and controlled enough.  The microsociologist Randall Collins, speaking of fights and violence generally, might’ve diagnosed what likely happened next:

Violence is not so much physical as emotional struggle; whoever achieves emotional domination, can then impose physical domination. That is why most real fights look very nasty; one sides beats up on an opponent at the time they are incapable of resisting. At the extreme, this happens in the big victories of military combat, where the troops on one side become paralyzed in the zone of 200 heartbeats per minute, massacred by victors in the 140 heartbeat range. This kind of asymmetry is especially dangerous, when the dominant side is also in the middle ranges of arousal; at 160 BPM or so, they are acting with only semi-conscious bodily control. Adrenaline is the flight-or-fight hormone; when the opponent signals weakness, shows fear, paralysis, or turns their back, this can turn into what I have called a forward panic, and the French officer Ardant du Picq called “flight to the front.” Here the attackers rush forward towards an unresisting enemy, firing uncontrollably. It has the pattern of hot rush, piling on, and overkill. Most outrageous incidents of police violence against unarmed or unresisting targets are forward panics, now publicized in our era of bullet counts and ubiquitous videos.