After he landed in Tahiti in 1769*, Captain James Cook met an island man, Tupaia, who drew him a map of islands of the South Pacific.

That Cook respected and trusted Tupaia is evidenced by the fact that for an entire month, he let Tupaia navigate his precious ship through the archipelago of the Society Islands, and on southward across open waters to Rurutu in the Austral Group. Tupaia turned out to be an invaluable linguistic and cultural translator for the crew, especially so in Aotearoa/New Zealand, where Cook landed next. Only when the Endeavour reached Australia did Tupaia’s powers to communicate fail; he eventually fell ill and tragically died in Batavia, today’s Jakarta in Indonesia.

Only copies remain, and they’re hard to comprehend:

For almost 250 years, Tupaia’s Map posed a riddle to historians, anthropologists and geographers of the Pacific alike. Until more recently, only a rather small number of islands on the map could be reliably identified. The British on Cook’s ship knew little Tahitian, and their linguistic talent was limited. They wrote down what they heard Tupaia say when he named the islands he drew, in an often very corrupted English transcription. What is more, many of the Tahitian island names are no longer in use in the region. But the more foundational problem is that even those islands which could be identified are hardly where one would expect them according to the logic of a Western map. By the standards of maps in Mercator projection as Cook used and drew them, the islands seem to be all over the place: Islands thousands of kilometers apart appear right next to each other, islands which should be to the south of Tahiti appear in the northern quadrants, small islands can have very large outlines, etc.

But here, you can read an idea for how to understand Tupaia’s map:

To cut a much longer story short: In Tupaia’s cartographic system, avatea marks a bearing to the north. It references the direction of the sun in its highest position at noontime (which south of the tropic of Capricorn, and most of the year south of the equator, points due north). Tupaia thus overrode the cardinal logic the Europeans set up for him: For the islands he subsequently drew, north would no longer be ‘up,’ east ‘right,’ south ‘down,’ west ‘left.’ North would from now on be in the center of the chart. What he thus also overrode is the logic of a singular, central perspective.

In Tupaia’s logic, there is no singular orientation abstracted from the traveller. True to his wayfinding tradition, the center of observation is always the va‘a (canoe). Rather than imaging an aloof bird-eye perspective, Tupaia must have invited his European collaborators to situate themselves in the chart, on a va‘a at any of the islands he subsequently drew.

One can’t help but be reminded of Super Mario Bros. 3, World 4:

* thanks to the many emphatic readers who noted my error (Cook’s voyage reached Tahiti in 1769, not 1767 as originally stated) 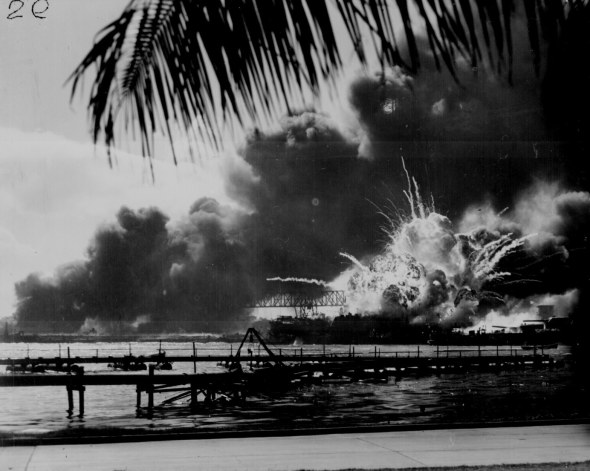 This fact is so crazy:

There were 38 sets of brothers on the USS Arizona; 23 sets were lost.

How about this story, introduced to me by reader Bobby M.?  A Japanese plane crash landed on the remote Hawaiian island of Ni’ihau after the attack.  It was so isolated that the island’s residents didn’t realize what had happened.  When they did though, that was the end of the pilot.

Aerial view of Niihau Island in Hawaii, looking southwestward from the north. Taken by Christopher P. Becker (polihale.com) on 25 Sep 2007 from a helicopter. From Wiki

One thing leads to another and I’m reading about how there were black people on the Caribbean island of Montserrat who were said to speak Irish Gaelic:

The Irish constituted the largest proportion of the white population from the founding of the colony in 1628. Many were indentured labourers; others were merchants or plantation owners. The geographer Thomas Jeffrey claimed in The West India Atlas (1780) that the majority of those on Montserrat were either Irish or of Irish descent, “so that the use of the Irish language is preserved on the island, even among the Negroes”.

African slaves and Irish colonists of all classes were in constant contact, with sexual relationships being common and a population of mixed descent appearing as a consequence.  The Irish were also prominent in Caribbean commerce, with their merchants importing Irish goods such as beef, pork, butter and herring, and also importing slaves.

There is indirect evidence that the use of the Irish language continued in Montserrat until at least the middle of the nineteenth century. The Kilkenny diarist and Irish scholar Amhlaoibh Ó Súilleabháin noted in 1831 that he had heard that Irish was still spoken in Montserrat by both black and white inhabitants. A letter by W.F. Butler in The Atheneum (15 July 1905) quotes an account by a Cork civil servant, C. Cremen, of what he had heard from a retired sailor called John O’Donovan, a fluent Irish speaker:

He frequently told me that in the year 1852, when mate of the brig Kaloolah, he went ashore on the island of Montserrat which was then out of the usual track of shipping. He said he was much surprised to hear the negroes actually talking Irish among themselves, and that he joined in the conversation…

There is no evidence for the survival of the Irish language in Montserrat into the twentieth century.

The wiki page for Amhlaoibh has several interesting quotes:

“February 3, 1828 …There is a lonely path near Uisce Dun and Móinteán na Cisi which is called the MassBoreen. The name comes from the time when the Catholic Church was persecuted in Ireland, and Mass had to be said in woods and on moors, on wattled places in bogs, and in caves. But as the proverb says, It is better to look forward with one eye than to look backwards with two…“

Amhlaoibh lived out in Callan, in Kilkenny:

Nearby was born James Hoban, who designed The White House:

On a trip to DC once I brought along this book, which I recommend to any DC visitor:

Applewhite might’ve been the first to put in my head the idea that the The White House is modeled on Irish country mansions: 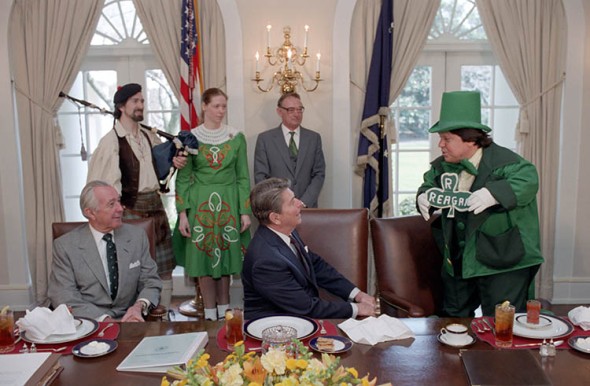 The entire southern half of Montserrat got pretty messed up by volcanic eruptions and was abandoned in 1997:

And is now an “exclusion zone”: 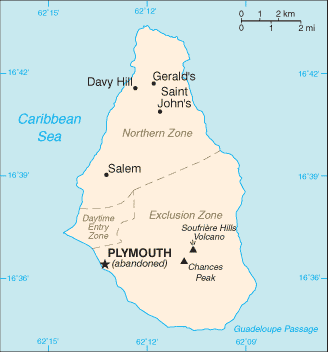 for more interesting oddities of Western Hemisphere geography and history, I recommend: 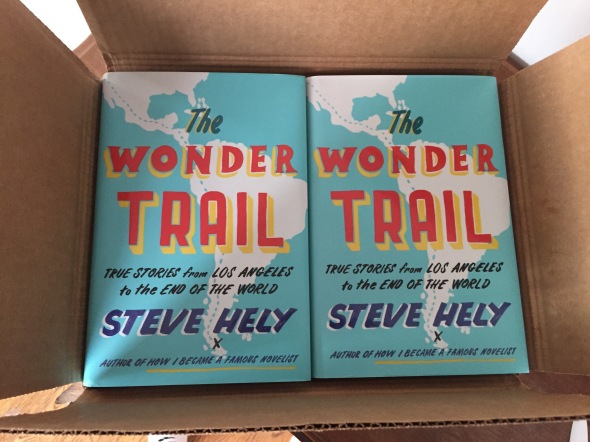