Shuttin’ Up For Summer 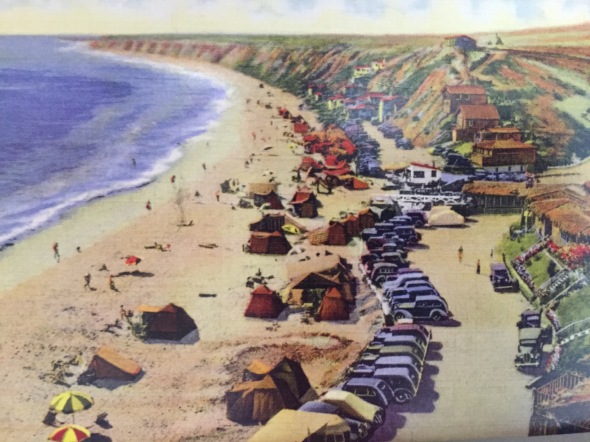 Before I go there were a couple things to get out of my system:

I like David Brooks, I’ve read all his books.  Lately he’s been getting hammered by the millennials.  That’s gonna happen when you tell people stuff they don’t wanna hear, true or not, and you don’t seem to actually have it all figured out yourself.  Whatever, he has an exhausting job.  Shouldn’t Times columnists take a year off every so often?

The message that’s at the center of this book might be, you must work hard every day at being a better person.

Who would disagree with this?  Yet it’s not really a message we hear that often.

Brooks thinks people used to hear this message all the time, it was part of the public life or public religion or culture of this country.  As his sparker example, he cites a radio broadcast he heard from the end of WW2: 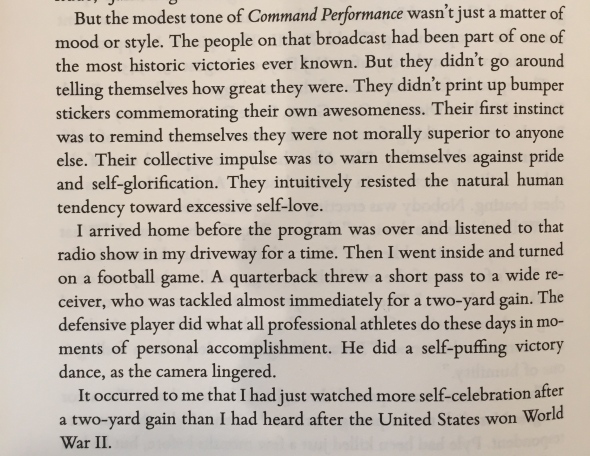 Well, ok.  But maybe they were somber because three hundred thousand American guys had gotten killed, half of Europe was leveled, China was fucked, they’d just dropped two world-changing weapons on Japan, there was footage somewhere of bodies being shoved into ditches by bulldozers at Nazi camps, and we might have to fight the Soviets tomorrow.

Maybe they were just tired and exhausted and depressed.

As for the football thing, you know durn well that’s not a fair comparison, Brooks.  You’re being glib.  An adrenalined athlete and a broadcast at the end of a war are going to have different tones.

Anyway.  The book is mini-biographies of: 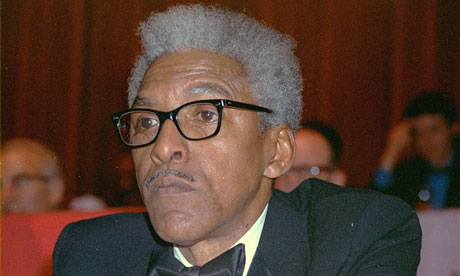 Dorothy Day (a fox, Brooks, you should’ve mentioned that, kind of part of the story here)

Those are all good.  Who doesn’t love little biographies?

The basic message is that all these people worked hard to be their best, to find what that was, sort out their values and then live up to them.  They overcome crazy challenges, achieved impossibilities, etc.

The world these people grew up in was very different.  For one thing it was way poorer.  It was way slower.  It was traditional.  It was segregated.  Some of these people worked to change those things, others were like the embodiment of preserving those values.

So not all the lessons are easily transferable.  Eisenhower and Marshall were military guys.  Day worked in the Catholic tradition.  Perkins and Eliot were from rigid semi-aristocracies.  Maybe a moral of this book might be “use the values you’ve been taught.  Lock into some tradition and try to advance it.”  That’s an interesting idea.

One thing that I think is a fake claim in the Brooks book is this:

Well whatever, Joel Osteen gives me the willies, but all these characters Brooks describes believed they were “made to excel… to leave a mark on this generation… chosen, set apart”

On the whole though, the book was a fine read, and it’s worth thinking about this stuff.  It reminded me of the lectures my high school headmaster used to give.  There was a lot of sense in them, I look over this book of them a lot.

This is a fair slam on Brooks’ book.

When Your Enemy Wants To Surrender, Let Him.

Disappointed Brooks wrote a column about Lee without noting my and Bob Dylan’s work on the topic.  As it happens I’ve been thinking about Lee a lot lately.

Here is what Grant says about Lee when they met at Appomattox:

The best one hour about Lee for my money is this PBS American Experience doc, avail free on my PBS Roku channel:

(How hard does American Experience dominate?)

Union General Montgomery Meigs thought of a punishment for Lee.  He turned Lee’s wife’s ancestral home, to which Lee hoped to retire one day, into a fucking cemetery:

As for naming schools after him?  Sure — maybe it’s a good lesson about how you can have some amazing qualities but be wrong about the most important things of your age.  Kids can be reminded every day to ask “what might I be wrong about? what are we ALL wrong about?”

But also who cares?  We can and should change our heroes as time goes on.  Name it after the next guy.  Name all those schools after Harriet Tubman or Sally Ride.  Or Francis Perkins or Bayard Rustin.

(I enjoy fails but I do prefer when I know for sure the guy isn’t paralyzed.)

If you need me btw you can find me here!:

– one of the prettiest songs ever written, says Dick Clark.