And so those Democrats who are gleefully predicting a Clinton landslide in November need to both check their complacency and understand that the Trump question really isn’t a cause for partisan Schadenfreude anymore. It’s much more dangerous than that. Those still backing the demagogue of the left, Bernie Sanders, might want to reflect that their critique of Clinton’s experience and expertise — and their facile conflation of that with corruption — is only playing into Trump’s hands. That it will fall to Clinton to temper her party’s ambitions will be uncomfortable to watch, since her willingness to compromise and equivocate is precisely what many Americans find so distrustful. And yet she may soon be all we have left to counter the threat. She needs to grasp the lethality of her foe, moderate the kind of identity politics that unwittingly empowers him, make an unapologetic case that experience and moderation are not vices, address much more directly the anxieties of the white working class—and Democrats must listen.

More to the point, those Republicans desperately trying to use the long-standing rules of their own nominating process to thwart this monster deserve our passionate support, not our disdain. This is not the moment to remind them that they partly brought this on themselves. This is a moment to offer solidarity, especially as the odds are increasingly stacked against them. Ted Cruz and John Kasich face their decisive battle in Indiana on May 3. But they need to fight on, with any tactic at hand, all the way to the bitter end. The Republican delegates who are trying to protect their party from the whims of an outsider demagogue are, at this moment, doing what they ought to be doing to prevent civil and racial unrest, an international conflict, and a constitutional crisis. These GOP elites have every right to deploy whatever rules or procedural roadblocks they can muster, and they should refuse to be intimidated.

And if they fail in Indiana or Cleveland, as they likely will, they need, quite simply, to disown their party’s candidate. They should resist any temptation to loyally back the nominee or to sit this election out. They must take the fight to Trump at every opportunity, unite with Democrats and Independents against him, and be prepared to sacrifice one election in order to save their party and their country.

For Trump is not just a wacky politician of the far right, or a riveting television spectacle, or a Twitter phenom and bizarre working-class hero. He is not just another candidate to be parsed and analyzed by TV pundits in the same breath as all the others. In terms of our liberal democracy and constitutional order, Trump is an extinction-level event.

This bit made me think of what Larry McMurtry said about glamour and Charlie Starkweather.

One of the more amazing episodes in Sarah Palin’s early political life, in fact, bears this out. She popped up in the Anchorage Daily News as “a commercial fisherman from Wasilla” on April 3, 1996. Palin had told her husband she was going to Costco but had sneaked into J.C. Penney in Anchorage to see … one Ivana Trump, who, in the wake of her divorce, was touting her branded perfume. “We want to see Ivana,” Palin told the paper, “because we are so desperate in Alaska for any semblance of glamour and culture.” 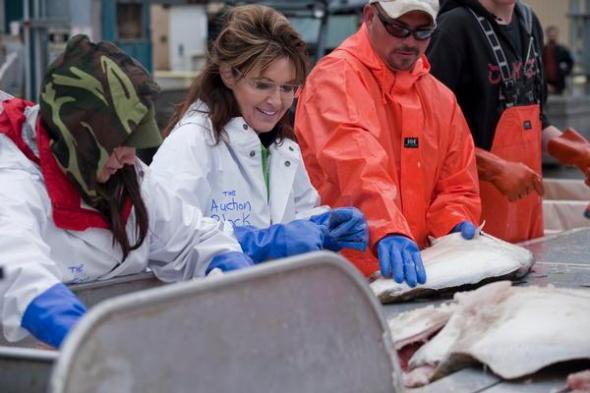 HOMER, ALASKA, AUGUST 06 2010: The day after she went fishing on the halibut boat Bear, Sarah Palin helps sort out the fish on the docks in Homer, the world’s halibut fishing capital, from where it will be taken to a local fish processing plant (photo Gilles Mingasson/Getty Images).