← Beloved Woman of Justice
Particular grace at the Constitutional Convention →

This is my hot take for today:

Let’s assume you agree with me and think women in the United States should have access to abortion when they need it.

Letting Roe v Wade get overturned could be a positive outcome that would help this cause in the long term.

In another 30 or so states, legislators might try to make abortion illegal.  This would become an important, contentious issue in state elections.  I believe this would drive voter turnout and galvanize women voters in particular.

KateNolan1979 took this one for Wiki

We might look to Ireland as an example of what could happen.  The issue of repealing the Eighth Amendment, which banned abortion, came up for a vote.  An electrified, involved, young electorate turned up.  Turnout was 64%, and Yes – the “pro choice” side – won with 66.40% of the vote (source).

I think this was healthy and democratic for Ireland.

Wouldn’t similar debates and votes, or mini versions in legislative elections in the states where abortion would be a contentious issue, be healthy and good for the country?

Or, better yet, have a women’s rights amendment to the Constitution.  That would be great too.

Where in the Constitution is there a right to an abortion?  It’s not in there.  We might like it to be in there, but it’s not.  The Roe decision didn’t find it in the Ninth Amendment:

The enumeration in the Constitution, of certain rights, shall not be construed to deny or disparage others retained by the people.[1]

In fact, if I understand right, the majority in Roe went out of their way to say they didn’t find it there:

The Court declined to adopt the district court’s Ninth Amendment rationale, and instead asserted that the “right of privacy, whether it be founded in the Fourteenth Amendment‘s concept of personal liberty and restrictions upon state action, as we feel it is, or, as the district court determined, in the Ninth Amendment’s reservation of rights to the people, is broad enough to encompass a woman’s decision whether or not to terminate her pregnancy.”[38] Douglas, in his concurring opinion in the companion case, Doe, stated more emphatically, “The Ninth Amendment obviously does not create federally enforceable rights.

The majority in Roe found the right in the Fourteenth Amendment, which is ridiculous.  Not at all the intent of that amendment.  At that point you’re making up stuff.

Roe v. Wade is one of the few Supreme Court decisions I’ve read and… it feels flimsy.  It feels like a wire and string solution to get to a result the court wanted.

The Roe decision is cheating.  It’s like the referee giving your team extra points because he wants you to win.  That might get you the result you want.  But it’s not good for the game.

Let the states fight it out!  Let conservative legislators be forced to show how they’re gonna enforce making abortion illegal.  Let them fight it every election cycle.

(lol bc I’m obviously out of my depth, ran this one by our legal counsel, MMW, for comment: 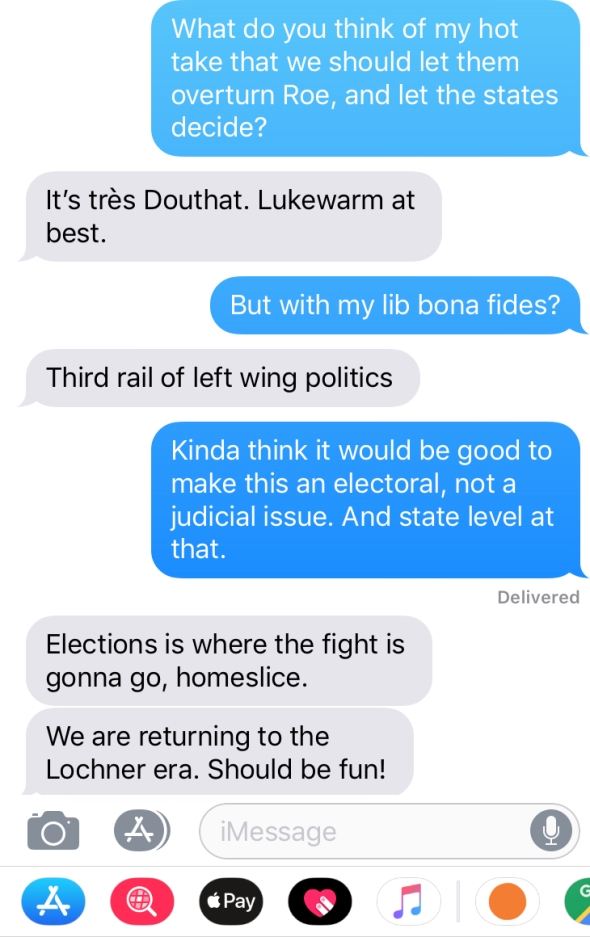 Had to look up the Lochner era.