The first extant record of his life comes from the court of John of Bavaria at The Hague where, between 1422 and 1424, payments were made to Meyster Jan den malre (Master Jan the painter) who was then a court painter with the rank of valet de chambre, with at first one and then two assistants.

Did he have help from his older brother Hubert on this one?

The notes on his preparatory drawing for Portrait of Cardinal Niccolò Albergati are written in the Maasland dialect.

Maasland by Michiel1972 for Wikipedia

His motto, one of the first and still most distinctive signatures in art history, ALS IK KAN (“AS I CAN”), a pun on his name,

Van Eyck undertook a number of journeys on Philip the Duke of Burgundy’s behalf between 1426 and 1429, described in records as “secret” commissions, for which he was paid multiples of his annual salary. Their precise nature is still unknown, but they seem to involve his acting as envoy of the court. In 1426 he departed for “certain distant lands”, possibly to the Holy Land, a theory given weight by the topographical accuracy of Jerusalem in The Three Marys at the Tomb, a painting completed by members of his workshop c. 1440. 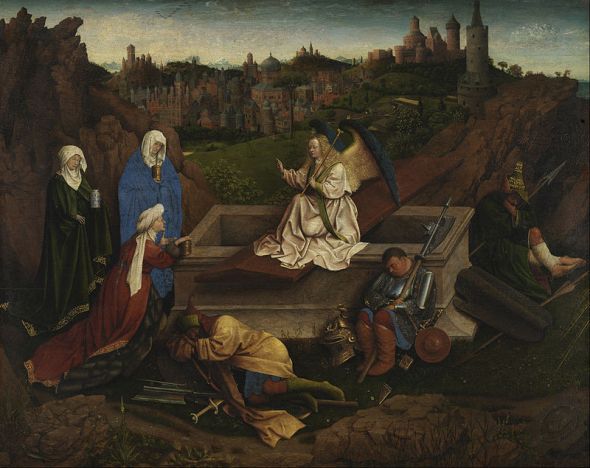 Though now some attribute this one to Hubert.  (I dunno, not astounded myself by the topographical accuracy here.)

A better documented commission was the journey to Lisbon along with a group intended to prepare the ground for the Duke’s wedding to Isabella of Portugal. Van Eyck’s was tasked with painting the bride, so that the Duke could visualise her before their marriage. Because Portugal was ridden with plague, their court was itinerant and the Dutch party met them at the out of the way castle of Avis. Van Eyck spent nine months there, returning to the Netherlands with Isabella as a bride to be; the couple married on Christmas Day of 1429. The princess was probably not particularly attractive, and that is exactly how Van Eyck conveyed her in the now lost portrait.

Here is a copy: 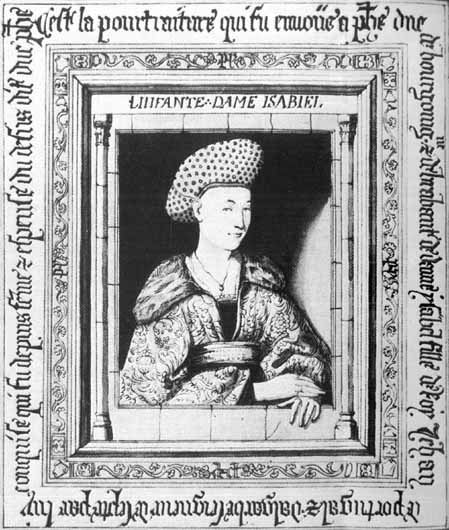 I was looking into Van Eyck because I was wondering, who did Hieronymous Bosch learn from?