Cowen and Taleb (and Norm)

It’s taking risks for the sake of becoming more human. Like Christ. He took risks and he suffered. Of course, it was a bad outcome, but you don’t have to go that far. That was the idea.

TALEB: Before 15, and I reread it many times. I’d say, before 15, I read Dostoyevsky and I read The Idiot. There’s a scene that maybe I was 14 when I read it. Prince Myshkin was giving this story. Actually, it was autobiographical for Dostoyevsky.

He said he was going to be put to death. As they woke him up and were taking him to the execution place, he decided to live the last few minutes of his life with intensity. He devoured life, it was so pleasurable, and promised himself, if he survives, to enjoy every minute of life the same way.

And he survived. In fact, it was a simulacrum of an execution, and Dostoyevsky . . . effectively that says the guy survived. The lesson was he no longer did that. It was about the preferences of the moment. He couldn’t carry on later. He forgot about the episode. That marked me from Dostoyevsky when I was a kid, and then became obsessed with Dostoyevsky.

I discovered that I wanted to be a writer as a kid. I realized to have an edge as a writer, you can’t really know what people know. You’ve got to know a lot of stuff that they don’t know.

Also re: Jesus, how about Norm Macdonald on the topic: 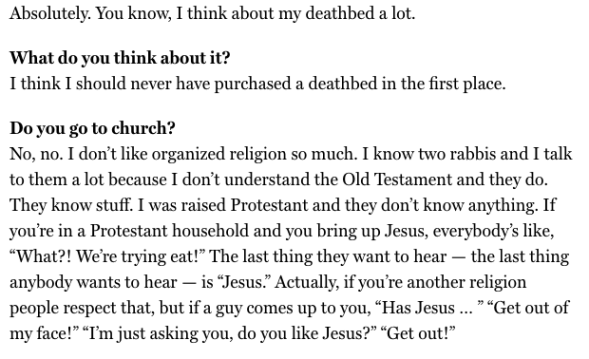