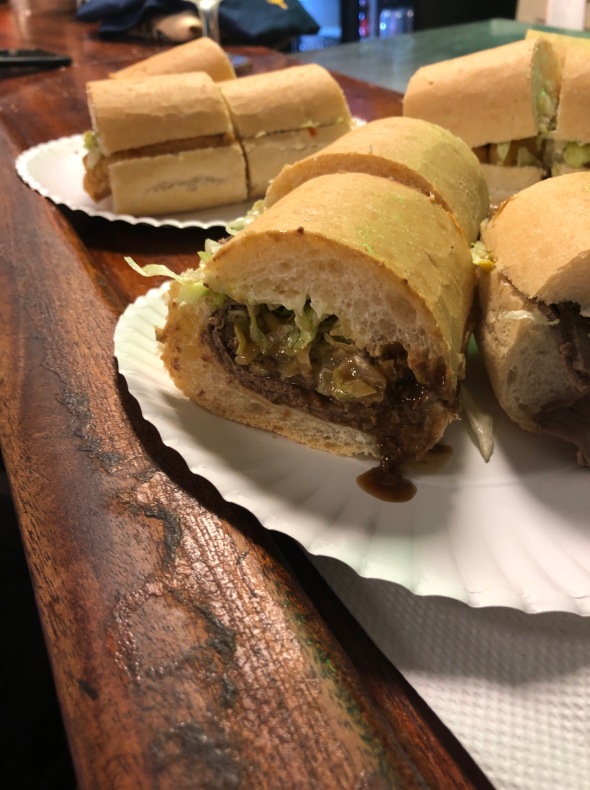 A medical expert once described the difficulty of surgery on the liver, a soft, fragile organ that can shred in your hands and rip with every stitch.  The heart is a hard lump of muscle, but the liver is delicate spongy tissue.  Manhattan is a rocky island, San Francisco is as solid and situation at the end of a long peninsula; those cities are as clearly defined as a fist or a heart.  But think of New Orleans as a liver, an expanse of soggy land doing some of what a liver does, filtering poisons, keeping the body going, necessary to survival and infinitely fragile, hard to pull out of context, and nowadays deteriorating from more poison that it can absorb, including the ongoing toxins of the petroleum industry and the colossal overdose delivered by the 2010 BP blowout. 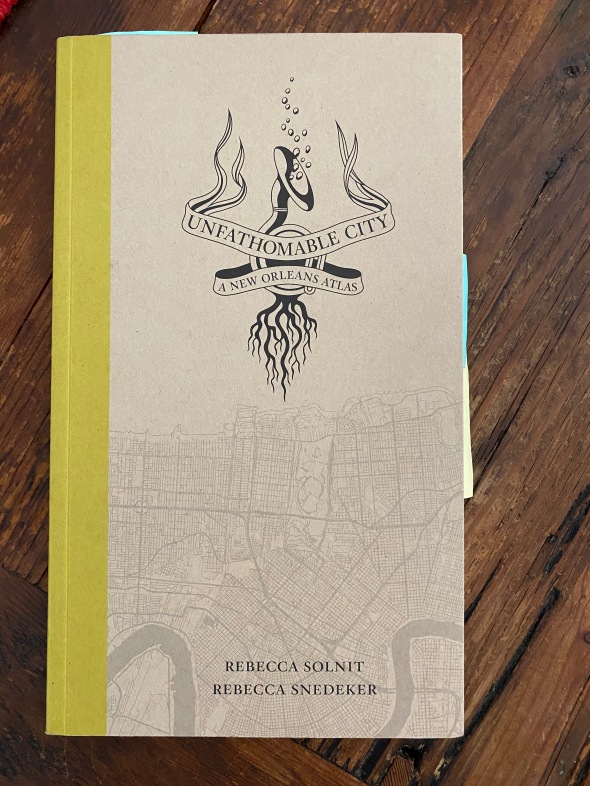 The first thing you notice about New Orleans are the burying grounds – the cemeteries – and they’re a cold proposition, one of the best things there are here. Going by, you try to be as quiet as possible, better to let them sleep. Greek, Roman, sepulchres- palatial mausoleums made to order, phantomesque, signs and symbols of hidden decay – ghosts of women and men who have sinned and who’ve died and are now living in tombs. The past doesn’t pass away so quickly here.

You could be dead for a long time

so says Bob Dylan in Chronicles.

New Orleans is illogical, upsetting.  It makes a mockery.  You start in Chicago, sensible enough, but float down the river and you end in African jungle, a Caribbean outpost of a forgotten empire, ruled by French pretension – but pretending to what, exactly?  No matter, it’s already forgotten.   What the jazz player and the performing drunk and the crooked politician all act out is the tension: this shouldn’t be here.

Vivien Kent in The Fatback of America (1948, is she cancelled?)

The minute you land in New Orleans, something wet and dark leaps on you and starts humping you like a swamp dog in heat, and the only way to get that aspect of New Orleans off you is to eat it off. That means beignets and crayfish bisque and jambalaya, it means shrimp remoulade, pecan pie, and red beans with rice, it means elegant pompano au papillote, funky file z’herbes, and raw oysters by the dozen, it means grillades for breakfast, a po’ boy with chowchow at bedtime, and tubs of gumbo in between. It is not unusual for a visitor to the city to gain fifteen pounds in a week–yet the alternative is a whole lot worse. If you don’t eat day and night, if you don’t constantly funnel the indigenous flavors into your bloodstream, then the mystery beast will go right on humping you, and you will feel its sordid presence rubbing against you long after you have left town. In fact, like any sex offender, it can leave permanent psychological scars.

Did not complete my reading of that book — it was too dense!  Every page was packed!  Every bite was sausage and spice, there was no rice.

In addition to the Atlas I had this one: 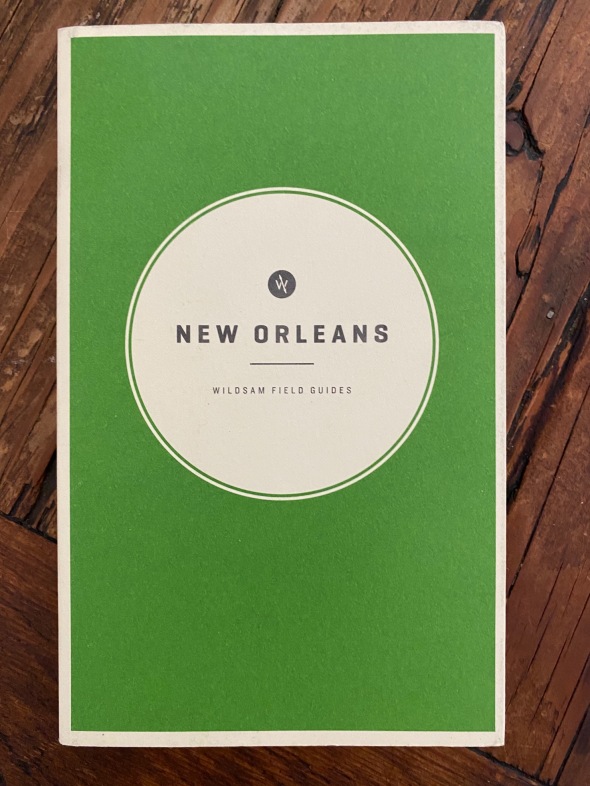 Books are good for getting ideas, but no information set in as permanent a form as a book should be trusted when it comes to New Orleans.  Whether it’s open, what night is good, intel of that nature must be gathered by asking somebody, or a phone call, or maybe best of all by walking by.

One of these books gave us the notion to take the ferry to Algiers from the foot of Canal Street.  The book claimed it was free, I believe it was $2.50.  Small price to pay to be out on the river. 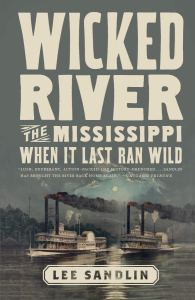 This book is just wonderful, I can’t recommend it enough.  What gifts Lee Sandlin left the world!  Lee begins his book by talking about how, when he waits for the bus in Chicago, the water under the grate at his feet is on its way to the Mississippi River, and on down to New Orleans.  This book has it all: Mike Fink, the New Madrid Great Shakes, the siege of Vicksburg.  And my God if he doesn’t make you feel like you’re really there in Congo Square, or at one of the true old Mardi Gras nights, a candlelight carnival, when the wildness could turn deadly, when they really thought they might summon the dead or the devil or worse.  I keep meaning to devote a longer post to Wicked River, but I shouldn’t miss this chance to recommend it.

New Orleans, populationwise, at 391,006, is about the size of Bakersfield, significantly smaller than Fresno.  Just a hair ahead of Wichita, Kansas.

One idea I really got out of the Snedeker Solnit Atlas is New Orleans as part of the Caribbean.  Bananas were shipped through here.  United Fruit Company, it was going down.  District Attorney Jim Garrison may have been off but he was not wrong to smell conspiracy everywhere.

There actually used to be an overnight ferry between here and Havana.  The mambo figures prominantly in New Orleans piano.  Professor Longhair.  It’s the Cuba Connection.

Steve Zahn’s character says in Treme.  It was really funny in Treme to have a character whose main quality was how annoying he was about being “into” New Orleans.  If you’re really “into” New Orleans, does that not by itself prove that you don’t get it?  Is that all part of the joke?

Re: the banana connection, The Atlas had me go listen to Lil Wayne’s Six Foot Seven Foot.

Life is a bitch and Death is her sister

Sleep is the cousin what a fuckin’ family picture

This time last year I was in New Orleans.  From The Atlas we learned the time of the Money Wasters second line was coming around.  The WWOZ website confirms the date and a route for the parade, ending Under The 10, in the epic sonic canyon created by the concrete freeway overpass that takes I-10 across the city on its way to Los Angeles and Jacksonville, Florida.  What a time!  What a place!  When will we feel that free again?

A guy at the second line said to me

When the wind is right it’s said you can see a dead body in the ruins of the Hard Rock Hotel.  A living ghost story: how New Orleans is that? 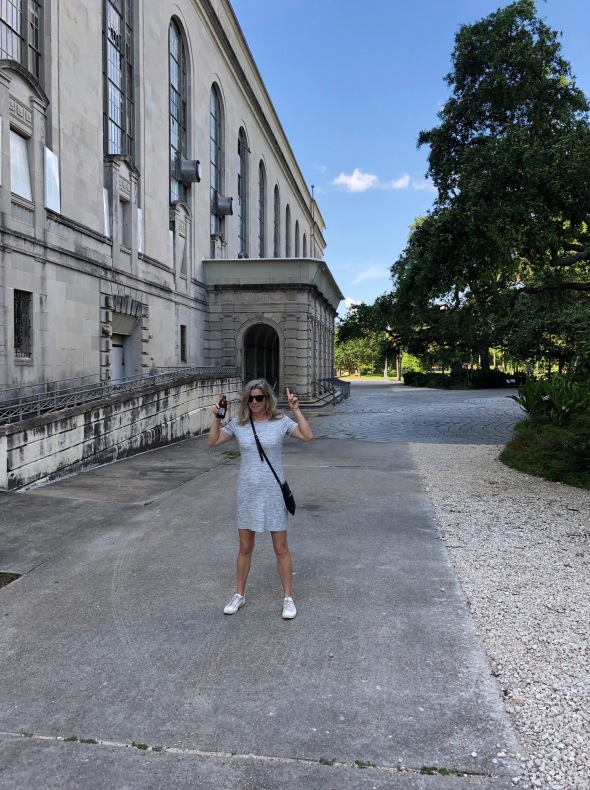 I’ve been thinking about New Orleans, and listening to WWOZ. 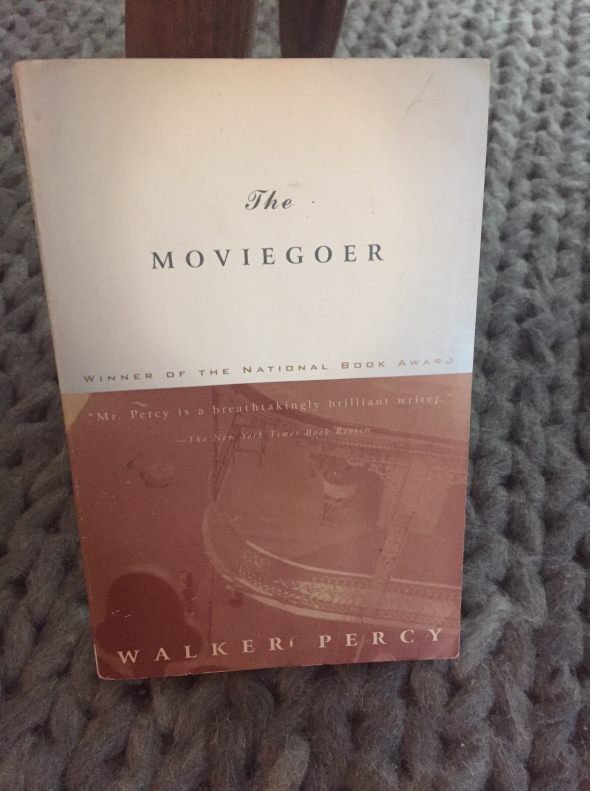 Took this one off my shelf the other day.  Think I was supposed to read it in college but never finished it.  The plot didn’t propel me along, but there’s some magic to it for sure.  A relaxed New Orleans kind of existentialism. 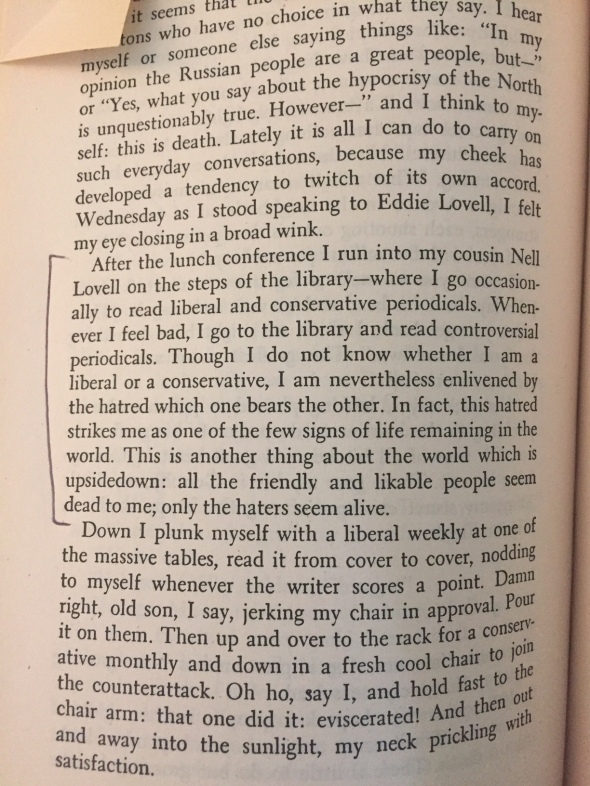 What’s the narrator looking for?  Even he doesn’t know. 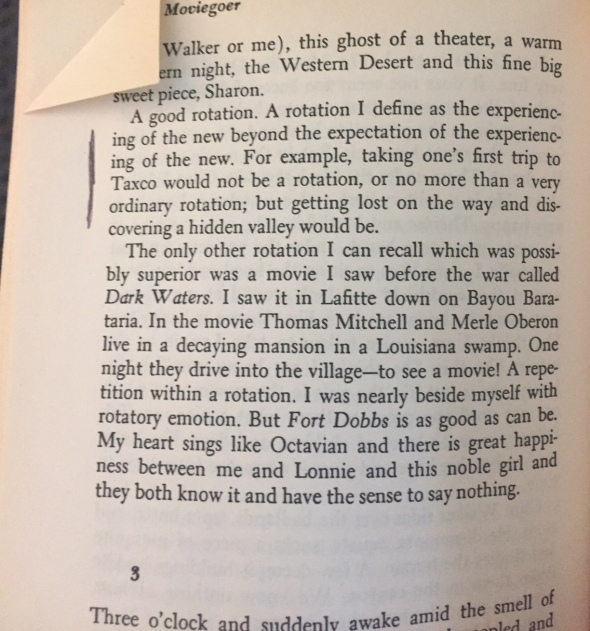 He sees a young man reading on the bus, and types him: 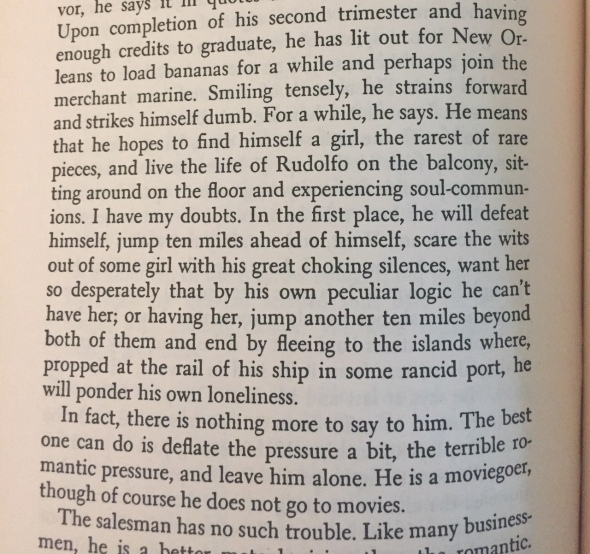 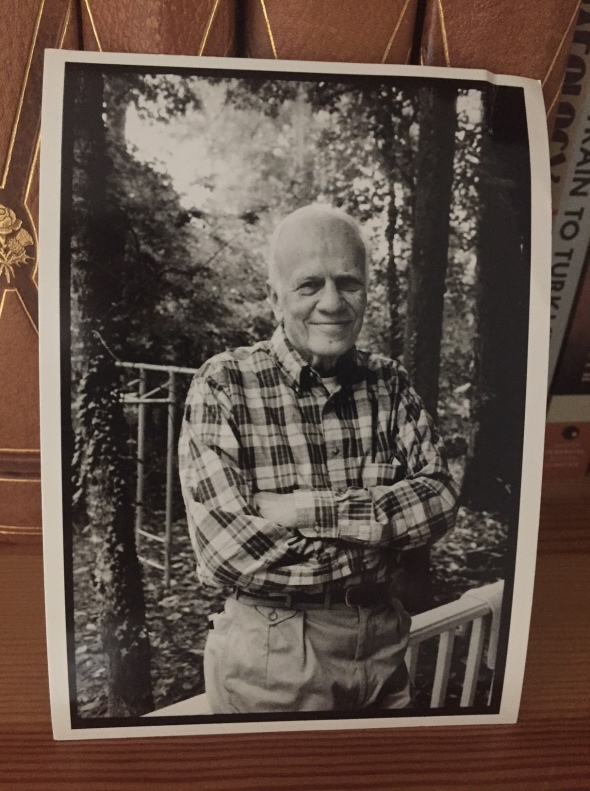 At one point the narrator sees William Holden on the street:

Ah, William Holden. Already we need you again. Already the fabric is wearing thin without you.

Did not know this is like a DC semi-slur/term for dummy? via NY Mag via cuz.

By the time Costa got fired for using it, ’Bama had been around for quite some time, and its meaning and use had changed. Most likely, the word was first used to put down recent arrivals to D.C.’s black neighborhoods from southern states—especially Alabama, says cultural anthropologist and long time Smithsonian staffer John Franklin. “It’s had currency over several generations,” Franklin says. It was a way of calling someone a black hick: “There was some disdain for people who didn’t live in the city and weren’t sophisticated.” The word had particular weight during the Great Migration, when many African Americans left the rural South for northern cities. Then, the point was to differentiate the newer arrivals from the longtime Washingtonians—who worried that the countrified Southerners flooding the District would reflect badly on the whole community. It was, essentially, the way D.C.’s black residents called one of their own a redneck. (Around the same time, German Jews who had already been in the U.S. for a few decades coined their own slang term to put down their less sophisticated Russian and Polish cousins—and thus, “kike” was born, only becoming a generalized ethnic slur afterwards.)

Eventually, ’Bama lost most of the geographic connotations it once had, and melted into just another piece of regional slang. Even white kids like Costa learned what it meant, picking it up by osmosis from the culture around them. Costa says his own definition of ’Bama is that it refers to a person who is “stupid.” He spent most of his life in the Baltimore-Washington area, and says he and his friends grew up using “the B-word” all the time.

In the Cajun people of Louisiana writers find what writers always find in the remote peoples of the world: pride of race, a healthy love of pleasure, a gift for spinning sorrow into beauty, ruddy confidence, a balance and a rhythm of life that seems enviable to the alienated wanderer.  I have gone to their parishes myself on several auto trips.

In the wrong mood I find their men crude and ribald.  But their women are at every age attractive.  A girl of 13 or 14 from the Acadian parishes can be almost impossible to look at in her beauty and passion.  Look her in the eye and it can stop you cold.  You will think on her for days.  Many of the older women spend the rest of their lives in the consequences of their first sexual blossoming.

Of their men I will say this: in a tight situation they are heroic.  None can argue they bleed life.

But above all it is this, you can feel it in their humor, in their food, in their music, in their religion, in their stories: they don’t treat life as though it’s too damned important.  Sad, beautiful, sorrowful, happy: it’s something, good and bad, take it as it comes, do your damnest.

[HT our Virginia Beach office via Garden & Gun magazine.  As of last reading, all the comments on this video were perfectly nice (“she was my substitute teacher in 4th grade!”)]