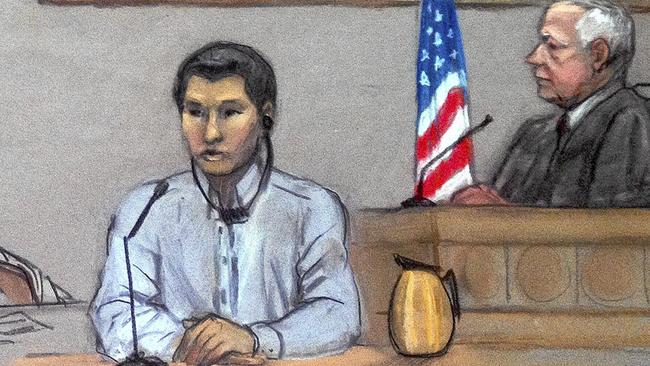 On a recent visit home to Massachusetts I was surprised to learn about this story, which I hadn’t been following.  After they learned that their friend Dzhokhar Tsarnaev probably did the Boston Marathon bombing, several associates went to his room and rounded up some of his stuff and threw it out.

The New Yorker tells the story with all kinds of vivid details.

The three of them went to Taco Bell, then to Tazhayakov and Kadyrbayev’s apartment, where Kadyrbayev’s girlfriend, Bayan Kumiskali, was about halfway through watching “The Pursuit of Happyness.” Everyone but Tazhayakov got stoned, then they all sat on the couch and watched the second half of the movie, checking for news on their devices.

Can’t help but feel for  Azamat Tazhavakov, “who was known as a mama’s boy, even though he was thousands of miles away from home.”

When Tazhayakov awoke early the next morning, he discovered that Dzhokhar Tsarnaev, who was still on the loose, had now been publicly identified as a suspect in the bombing, and that Tamerlan had been killed. Tazhayakov began to panic and smoked marijuana for what may have been the first time in his life.

Once Mayor Tom Menino of Boston came to speak at my high school.  He was a terrible speaker, had a bad speech impediment.  He said that when he was a kid he told his teacher, a nun, that he wanted to be an engineer when he grew up, so he could build bridges.  The nun told him he wasn’t smart enough to be an engineer.  So, he said, he became the mayor to build bridges between communities.

Tom Menino once told me he didn't care what I wrote so long as I didn't say he didn't get the snow removed. He knew how to be mayor.

2) This video is all over my Facebook.  I have a tale of New York City street harassment.

One day in 2009 I was walking around looking for apartments with a real estate broker.  The broker was an extremely attractive woman, the girlfriend of a friend.  It was a really hot day, she was wearing like a bare-armed shirt thing under a jacket and she took the jacket off.

The catcalls and stuff yelled at her was INSANE.  Like, at least ten dudes said something, most of it muttered after she walked past.

Now, being a self-absorbed dude, my reaction to this was fascination but also like “am I supposed to do something about this?”  Like, “I’m walking with this woman, and presumably it could be my girlfriend or my sister or something, am I supposed to like beat up all these dudes? Because that would take a long time and also would by no means be a guaranteed victory.”  She rolled with it as though it was no more significant than the squawk of pigeons but man.

Anyway, now I have successfully made this story about me.

this was in Union Square and literally Washington Square Park and the heart of the West Village, also mostly white dudes.

I defer to Mero on this one:

NO USE IN TALKIN TO SOMEONE THAT DONT WANNA TALK TO YOU, YOU BEING PERSISTENT WONT CHANGE HER MIND B

WHO CARES? U AINT GOTTA GO ALL HARD AND CALL SHORTY NAMES OR BE EXTRA CUZ THERES 1000 MILLION OTHER WOMEN TO TALK ABOUT WEATHER TO FAM

From The Flowering of New England:

One of [Boston publisher James T.] Fields’s jokes was about the Boston man who read Shakespeare late in life but found him far beyond his expectation.  “There are not twenty men in Boston who could have written those plays,” he said.

VWB also tells us about John Bartlett, who was just a guy in Cambridge you went to when you needed to know who said something, until he finally went ahead and published his Familiar Quotations.

More excellence from The Flowering of New England

…generations later, when people spoke of Emerson’s “education,” they put the word in quotation-marks – it was not that he did not know his Greek and Latin, but that he was never systematic.  He had read, both then and later, for “lustres” mainly.  He had drifted first to Florida and then to Europe, and finally settled at Concord…As for the lectures that Emerson was giving in Boston, on great men, history, the present age, the famous lawyer, Jeremiah Mason, when he was asked if he could understand them, replied, “No, but my daughters can.”

To the outer eye, at least, Emerson’s life was an aimless jumble.  He had ignored all the obvious chances, rejected the palpable prizes, followed none of the rules of common sense.  Was he pursuing some star of his own?  No one else could see it.  In later years, looking back, Emerson’s friends, remembering him, thought of those quiet brown colts, unrecognized even by the trainers, that outstrip all the others on the race-course.  He had had few doubts himself.  He had edged along sideways towards everything that was good in his life, but he felt that he was born for victory…

Van Wyck Brooks clearly has a little crush on Miss Elizabeth Peabody, “the founder of the American kindergarten.”  More from The Flowering of New England.

As for Miss Peabody’s future, one could see it already.  One pictured her, forty years hence, drowsing in her chair on the lecture-platform or plodding through the slush of a Boston winter, her bonnet askew, her white hair falling loose, bearing still, amid the snow and ice, the banner of education.  If, perchance, you lifted her out of a snowdrift, into which she had stumbled absent-mindedly, she would exclaim, between her gasps, “I am glad to see you!  Can you tell me which is the best Chinese gramar?”  Or she would give you the news about Sarah Winnemucka.  “Now Sarah Winnemucka” – this was the maligned Indian princess who was collecting money to educate her tribe.  Or she would ask if you had read your Stallo.  She took down every lecture she heard, although she seldom wrote what people said: most of her reports were “impressions.”  *

* “I saw it,” Miss Peabody said, when she walked into a tree and bruised her nose.  “I saw it, but did not realize it.”